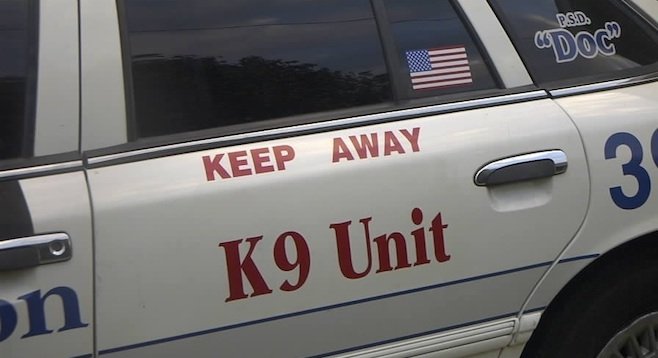 While watching TV, there was a police scene where they were waiting for the K-9 unit to arrive to track the suspect. This led me to wonder where the term/name K-9 came from to identify our canine friends in public safety.

As far as homophones are concerned, K-9 seems a no-brainer substitute for “canine,” which is itself of Latin origin; “canis” meaning “dog” and “canine” being derived from that as an adjective for “dog-like” around the 17th Century. According to the OED, using “canine” as a noun to refer to a dog in general is a mid-19th-century development. There is a bit of anecdotal use of the term K-9 in the late 19th Century — and that’s all across the pond — but it doesn’t enter common usage until WWII. The so-called K-9 Corps of the American Army forced the term into our contemporary lexicon and the cops inherited it from there. Of course, war dogs go back to pre-Roman times (“cry havoc and let slip the dogs of war!”), so K-9 units have been around forever. I’m willing to bet that the war dogs of the Roman army made the most snarlingly vicious police dog look like a service Labrador by comparison. It’s actually kind of impressive that nobody thought to string the letter K and the number 9 together a long time ago, but without a print record, it looks like the term is a 20th-century invention. By the time Jim Belushi and a German Shepherd dog filmed a scene at the Golden Hill Cafe on C Street for K-9, it was firmly entrenched in the policing lexicon. Of course, none of that helped the movie be anything but a cultural speedbump. The most enthusiastic review on Rotten Tomatoes reads, “Surprise! It’s a real dog!” And if you want to have a good chuckle, go find some online reviews of the “long-awaited” sequel, K-9 P.I.