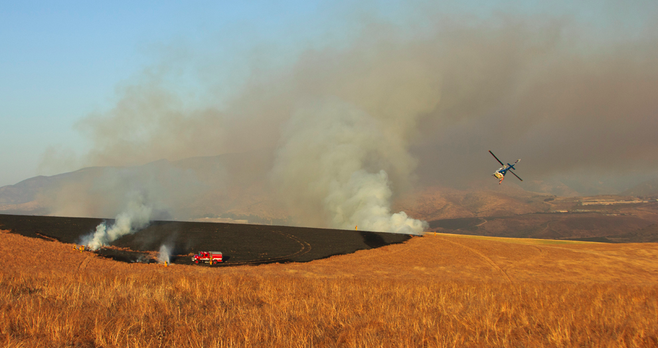 On April 28 at approximately 5:45 p.m., a large cloud of gray smoke could be seen rising above southeastern Chula Vista. The smoke appeared to be very close to homes in the area, so I drove my car to the southern end of Magdalena Avenue at the intersection of Rock Mountain Road.

Olympian High School is on Rock Mountain Road, and a police car was blocking the entrance to the school, preventing cars from driving eastbound on the road.

The smoke appeared to be just over the closest hill, so I hiked up it at around 6:30 p.m. and spotted the burn zone. Firefighters were on the scene and the blaze appeared to be under control. Two helicopters were assisting and making repeated overhead passes. The fire was extinguished just after 7:00 p.m.

For about an hour, the 125 freeway was shut down through the area because of the close proximity to the fire. The fire ended up burning a little over an acre and came within 300 yards of Olympian High School and a neighboring park.