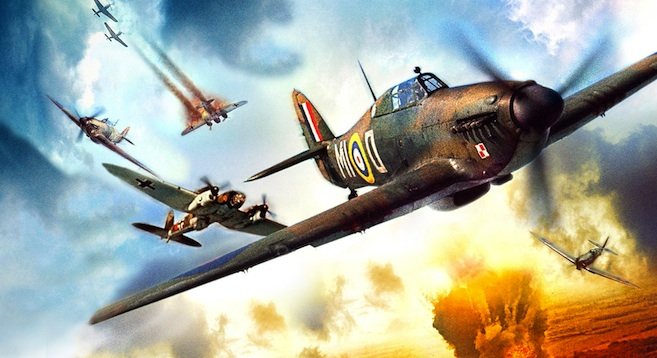 Watching [the movie] Battle of Britain, I saw a ball-shaped device just back of the pilot’s window on the left side. It was mounted on cables or wires top and bottom. Could this be radar ? It was on a bomber, I think. I checked with a couple of air museums, but no soap. I guess there are not any flight engineers around who would know now. What do you think they might be?

The planes used as German bombers in Battle of Britain were repainted, Spanish CASA 2.111 bombers that were actually part of the Spanish air force (although nearly retired) when the movie was filmed. They’re nearly identical to the Heinkel He 111, of which only a handful survived the war. I have a few suggestions for what your mystery part might be. It’s most likely the fairing that covered the loop antenna of the radio goniometer for the RDF (“radio direction finder”). A sort of precursor to radar, the RDF functioned like a mobile, radio lighthouse in that it could detect the heading and distance to a fixed beacon, thus aiding navigation. Looking behind the cockpit of the CASA 2.111, you can see a teardrop-shaped fairing there, which is the housing for the RDF. Early radar antennae on WWII-era planes were all pretty sturdy affairs, most of which only had a few prongs to receive the basic signals of 1940s radar.

Other than that, there weren’t any other kind of antennae affixed to those bombers, as a quick look at a parts schematic reveals. Something simply wired to the outside of the plane would have been too fragile for the theater of war. Unless you’re seeing something that I’m not picking up as I watch and rewatch riveting clips of the movie’s dogfights and midnight bombing runs, I’m going to go with the RDF antenna fairing as the mystery piece.