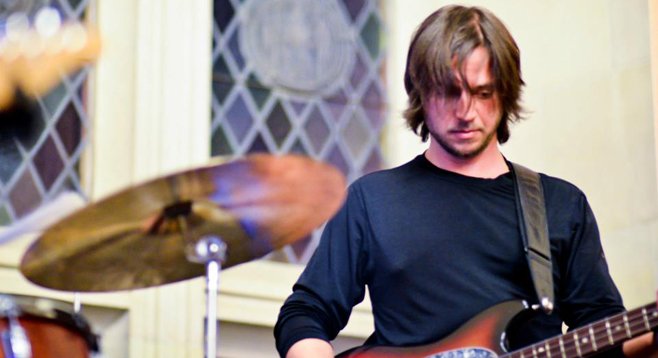 Known as Ott Truckee when he plays bass with the Truckee Brothers, Greg Friedman cut his teeth in the Washington D.C. punk scene. Still, he says he and his wife “had to have all the rugs removed” before moving into the former party house of the UCSD water polo team. About living in La Jolla, Friedman says he enjoys “the view from the canyon at sunset” and dislikes the fact that “La Jolla is not actually a word in Spanish.”

Friedman’s solo debut, Souls of Passing Feet, was nominated for best pop album at the 2007 San Diego Music Awards. Our online chat about his new release, Can’t Talk Now, starts with me inserting my foot into my mouth. Unaware that he’s snagged the services of a renowned graphic artist, I observe, “The cover art — a woman swaddled like a mummy, with the tape unraveling and imprisoning her — is painful to look at. How did that come about?”

“I wanted this album to celebrate the vinyl format, honoring the music I grew up with. Staring at the album cover while listening to a record is part of that experience. When I started thinking about artwork for my album, I pulled some of my favorite covers out of my collection, looking for inspiration. Pink Floyd’s Dark Side of the Moon and Wish You Were Here, Peter Gabriel’s Car and Melt — the list goes on. Out of curiosity, I looked to see who the cover designers were, to discover they’d all been by the same guy — Storm Thorgerson. I saw it as a sign. So, I took a chance, contacted Storm, and asked if he’d create the artwork for my album. He wrote back that he’s rarely in the States but that he happened to be in Los Angeles, and I should come talk to him. I jumped in the car, drove to L.A., and we spent the afternoon talking about music, art, and life.

“Storm looked at my music and lyrics, then sent ideas that he felt captured the album concept. Can’t Talk Now is Storm being funny — as in, ‘Sorry, I’m tied up at the moment.’”

The melodic, hard-hitting “Melancholy Melody” reminds me of Weezer’s mid-era mix of joy and conflict. It’s followed by a quiet duet with Jane Lui, “Hear The Sound.” The third track, “Best I Can Do,” seems more in tune with contemporary pop, and the fourth, “Zombies & Cannibals,” is full of power-pop twists and turns. “By the time it hits,” I say to Friedman, “Can’t Talk Now is starting to feel rather...all over the place. Were you concerned with making a cohesive album or thinking about single-track downloads?”

“I love an album that takes me on a journey. Musicians have different techniques for mapping that out. I create a movie in my head and build the album as the soundtrack. Track one is the opening credits, giving a sense of the album’s overall tone. The second track is the beginning of the story. I’m also paying homage to the opening tracks of the White Album.

“I’ve listened to and played so many kinds of music. My memories are indelibly linked to the songs that played while my life unfolded, whether it was the Cocteau Twins, over which the joys and heartaches of relationships played out, or the Dead Kennedys helping me through the angst of high school. So, I don’t feel satisfied settling into any one genre. It wouldn’t be a true picture of who I am and what I have to say.”

“Can’t Talk Now has stronger group chemistry than I feel was on your first album. Were Chris Hoffee, Jane Lui, Chris Prescott, and Carl Prescott involved in the creative process?”

“I wanted this album to sound like a band. And what better way to gel than to play live? We rehearsed, revised, and improved, performing tracks from the record around town. It wasn’t strictly about learning the songs, it was more about learning each other. Once the musical mind meld had happened, I knew it was time to record.”

“Jane Lui recently moved to Los Angeles. Will you still be working with her?”

“Absolutely. Jane is brilliant. She comes to the studio, we set up a microphone, and she does whatever she wants. In January I started a project, ‘The Song-a-Month Club’ [gregfriedmanmusic.com/a-song-a-month], where I record a new track every month, then release it the following month. Jane and I have been collaborating on these songs remotely. I send her songs as I record them, and she sends back vocal tracks for me to add.”

Mastered by Greg Calbi (John Lennon, the Ramones), Can’t Talk Now will be released on vinyl on June 4. Artist Storm Thorgerson passed away from cancer on April 18, 2013.