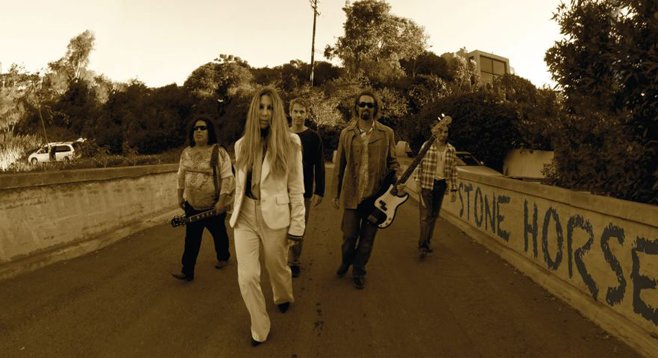 ‘In December, we changed the name to Stone Horse.” I tell Danielle Spade the new name rings of Linda Ronstadt. She giggles: “Yeah. Stone Ponys. But my sister said our other name was too long. The Carlos Rock Experience? She said people would think it was a play on the life and times of Carlos Santana.”

Spade also likes how the new La Jolla–based band’s name is a fit with her day job as an equine dentist. A veterinarian, she owns To the Point Equine Dentistry. She shows me a tiny scar on her lip, the only remnant of getting horse-kicked once and having had her jaw broken.

“At the hospital they thought a guy had done it to me, right? They said, ‘We only see these kinds of breaks in the military and among inmates.’”

The namesake of the former Experience is Carlos Rodriguez, a guitar player who went to La Jolla High School with Spade and Warren DeMartini and Robbin Crosby (the latter two went on to form Ratt in Los Angeles).

Danielle arrives for the interview in rock-star fashion: form-fitting jeans, jacket, and a scarf. Her hair is long and colored two or three shades lighter. The tinted aviator shades don’t come off until halfway through the interview. She is a mixture of calm and alert and a little reserved at first. I have coffee. She orders tea. A guy at the coffee shop stops to chat her up; he recognizes her from a gig.

Did you know DeMartini or Crosby when you were in high school?

“I sat next to Warren in foods class. We talked about that at Robbin’s memorial [Crosby, of La Jolla, died June 6, 2002]. He remembered the teacher’s name, Mrs. Mittermiller. It was the only classroom with a bathroom, and Warren would smoke cigarettes in there and get us in trouble.”

When did you decide to make a go of music?

“My mom was trying to get backstage at a Beatles concert when she was pregnant with me, so I think it was all decided beforehand, you know?”

“Carlos writes the music. I write all the lyrics.”

Do you two write together?

“Sometimes we come up with an idea while hanging out at the beach, or sometimes we get together and he shows me some riffs he’s working on, and I come up with lyrics. He writes lyrics, too, but I’ve only ever come up with one riff that impressed him. I don’t play guitar.”

All originals? No covers, right? What would you say is the main message of Stone Horse?

“We only play rock and roll. Carlos is very influenced by the Faces and the Stones. You know, three-chord rock.”

I wonder if your day-job as a horse doc has influenced your music in any way.

“Yes, it has. Carlos wrote a song once called ‘She Likes Horses.’

“One of my favorite lines is, ‘That horse has got more brains and more sense than the average guy.’”

“Depends on the horse and the guy.”

What local venues can someone expect to catch your act?

“We’ve played Brick by Brick, Jose’s in La Jolla, Winstons, and 4th&B. It was our goal to open for a national act there. And we did. We opened for Jackal. And then, the place closed down.”

What are your hopes for the band?

“To get on a bus and do this for the rest of our lives. Touring is the lifeblood of a band, not to mention, I’ve got a thing for the room-service guy.”

Do you have a nickname in the band?

“No, but some of my clients call me ‘Doctor Rock and Roll.’ Or they’ll see me taking care of their horse and say, ‘Hey, I saw your band play.’”

How long have you been a vet?

“I’ve been a vet for six years. I drive a lot to see my clients, from L.A. to Mexico. I wrote a song called ‘Driving.’”

What are some of the words?

Do you guys have an album finished yet?

“We have a CD called More Guts than Grace. I think Keith Richards said that. Man, that’s us.”

By now you must have some kind of gauge as to how the band is progressing...

“Yeah. The venues keep getting better. That’s how I know we’re getting better all the time. And I’m starting to get recognized out in public, like by that guy outside the coffee shop. It’s pretty cool, and it feels good.”