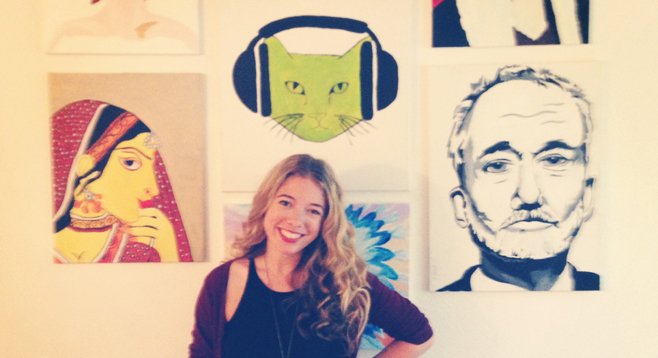 Ever since watching MTV’s Total Request Live (TRL) in high school, Rachel Frank has known she’s wanted to be a veejay. “I just loved watching [TRL] when I came home from school,” she says. “Everyone has been saying, ‘Aw, I really miss music videos and video countdowns.’ It’s just fun to watch music videos and get to know the bands on a more personal basis.”

In order to bring back the excitement around music videos (and to fulfill her veejay dreams), Frank teamed up with Christian Rodas to create ListenSD, a webisode series in a TRL-style format with a focus on San Diego bands and their music videos.

“Rachel’s program is the only one of its kind where it focuses on videos,” says Joe Clarke of King Legend, a garage-rock band featured on ListenSD’s first episode.

Although Rodas and Frank started collaborating in December of 2012, they managed to create a website with album and show reviews and put together an episode, which they screened at their March 1 launch party at the Griffin in Bay Park. The episode featured interviews and music videos from San Diego bands King Legend, the Burning of Rome, and Oliver Trolley.

The bands in the debut episode were selected by the ListenSD producers, but Frank and Rodas hope their fan base becomes more active in helping them pick bands to be featured. Audience participation will include voting on favorite videos and bands and writing album and concert reviews for the ListenSD site. “We want this to be a show for whoever is in San Diego. The more responses we have from the community, the better,” says Rodas.

As for future goals, ListenSD organizers have their sights set on helping San Diego music progress rather than reaping profits. “I think what’s going to really help build up San Diego music,” say Rodas, “is groups of people like us to lift up this music and give it the exposure it deserves.”