One catfish at a time 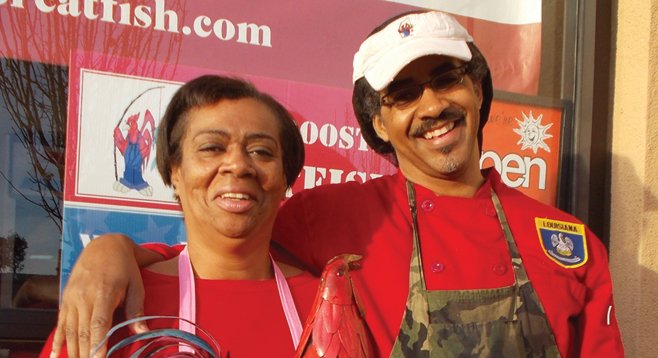 Suddenly, we’re in the countryside. I’m walking across an arched bridge and looking down at Market Creek, a gurgling rill flanked by luminous green meadows.

Behind me: Market Creek Plaza, built like it’s out of Aztec times...or Egyptian, maybe. Yellow domes, purple towers, mosaic walkways, lots of restaurants, and even a Food4Less supermarket in the same dreamy design.

Then you cross the footbridge to the other side of the creek, and the only thing between you and empty land is this big community center and a parking lot.

So, now that I’m out here in the country I’m discovering that there’s no other way back. I’m just trying to find one when I spot this sliding window in the back wall of the community center. It’s too small to get your head through. Has a sign: “Red Rooster Catfish, where Mmm Kisses Ahh!”

A tin rooster, painted red and yellow and blue, stands on the window’s ledge.

Now a face appears. Lisa. Dressed in red, with a pink apron. “What would you like?”

She hands me a menu. It has everything from catfish to tilapia to tiger shrimp to — hey! — frog legs. We’re talking Louisiana country cooking. Prices go from $2.95 (for fried pickles) to $4.15 for a catfish sandwich to $14.75 for two pieces of fried catfish with fried tiger shrimp.

Who’d’ve guessed? A full-on Louisiana cookhouse, here behind a li’l window in a community center in the middle of a field. 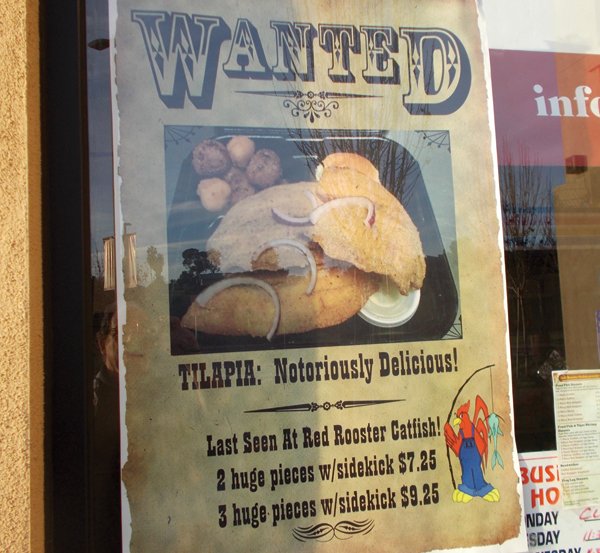 Frank, Red Rooster’s owner and chef, makes his own posters.

Lisa gives the order slip to this live-wire guy in a red chef’s outfit, Frank. He’s just finishing up on the phone. “Okay, kinfolk,” he says. “What else can I get for you, champion? All right! Make that 15 minutes.”

“What’s going on?” I ask Lisa. “How can anybody do business out here in the back of beyond?”

“Frank’s a visionary,” she says. “He always dreamed of starting his own Louisiana catfish restaurant. Catfish and beer. That’s the Louisiana thing. This is a start. He’s making it happen by word-of-mouth.”

My tilapia comes in five minutes. I take the black polystyrene box of goodies back to where a couple of umbrellas shade two lonely concrete tables and benches. Can’t get over how country this is. There’s just me, wind sifting through the trees, a distant trolley disappearing, the parking lot, the creek. There’re a couple of crows cawing and no other sounds. How do these people get customers?

The tilapia’s breaded and has those corn nuggets and the Hawaiian bun with it. Plus a spicy tartar sauce. It’s pretty delish and filling. But now I wish I’d come up with another buck and got some catfish, seeing as how that’s Frank’s main thing.

Then Frank comes out to take a photograph with a little gal who’s here with her great-grandma to get catfish — and to sell Girl Scout cookies.

When he’s finished talking to them, he comes and sits down at my table. “I know,” he says, “this is a crazy hole in the wall. But it has always been a dream of mine. I’m from Shreveport, Louisiana. Back there, reputation was everything. You’d travel the bayou backroads, mud, potholes, in the dark, maybe, and then you’d arrive at a place in the trees, and it would be crowded with people, cars, because people knew that here was a good cook. I always believed, if you cook it right, people will come.”

Frank was in the Navy, based in Japan, and Australia. Then he worked for Pfizer, the pharmaceutical company. “Budget and contracts manager. But I had this idea. So, finally, I left Pfizer. I couldn’t get financing because of the recession. But my grandma always says, take it one catfish at a time. So I just got me a ten-by-ten tarp and set up under it in the parking lot of a supermarket. Then an Elks Club manager invited me to go cook in their kitchen. Then these people at the Jacobs Community Center here tested my cooking and invited me to use this space in the back of their building. As an independent business, but also cooking for them. People know me now.”

Frank’s ultimate dream is to get a restaurant space across the footbridge in Market Creek Plaza. “With beer for the gents and moscato [muscat] sweet wine for the ladies. That’s what I’m working on now.”

Actually, the best moment for me comes a few days later. Hop off the trolley and head over that footbridge again: gotta try those frog legs.

“Ah! Pond chicken,” he says. “That’s what we call the frogs, because they taste so like chicken.”

He cooks me “three sets” of frog legs, plus spicy beans, a bun, and spicy tartar sauce for $9.25. And here’s the thing: each “set” is a pair of jumping legs. They sit there on your plate, fried but still intact, as if three headless frogs were about to leap off of your plate. It’s a bit, well, disturbing, if you wanna know the truth.

I watch the legs carefully. Because I’ve just read in Wikipedia that “frog muscle does not resolve rigor mortis as quickly as warm-blooded muscle [chicken, for example], so heat from cooking can cause fresh frog legs to twitch.”

Yes, they are a bit chewy, and the white meat does taste like chicken, but I can’t detect any twitching. Also — is it my imagination? — I swear you can taste the bayou in there.

Once you get past all this, it’s worth it. And, turns out frog legs are rich in protein and Omega-3 fatty acids. And, if it’s a bullfrog, you’re helping to limit a critter that’s right now invading the west and as outta control as fire ants.

Meanwhile, Frank says he’s working on having his dream restaurant in the plaza ready over the summer.

I start for home. Notice a quote in metal letters high up on the Jacobs Center. It’s from the man who made this big community center happen, Joe Jacobs himself.

“And what did we start with? Nothing more than opportunity.”

Guess you could say the same about Frank.

I'd heard about this place a while back but forgot about it. I'm going to make a mental note to try it. Thanks for the tip. Good food options in this community are rare if you're looking for more than a taco shop.

So true MsSheree. Frank is a genuine character and everyone I met making the pilgrimage said he was worth it (because there are a couple of BBQ places eight across the creek in the shopping complex. And actully he'd like to set up there if he gets the chance.) Meanwhile he's still the best kept secret west of the Pecos. I'll be going back to try the catfish.