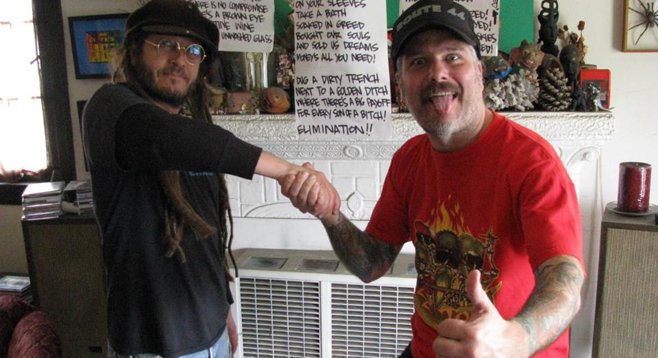 Jason “Blackie” Blackmore says he first came to San Diego while touring with hardcore band Molly McGuire. He relocated from Missouri in 2000 because, he says, “I really dug the local music scene, especially Tanner and Drive Like Jehu. I thought the city was beautiful and laidback.”

Eager to discuss his first film, Blackmore calls from his home in O.B. to discuss Records Collecting Dust.

“I’ve wanted to make a music documentary for years. I just never had what I thought was the greatest topic. Last October, I woke up with this idea: a film about records! It was a light-bulb moment. Everybody has that nostalgic connection with vinyl. And when I got into hardcore, I fantasized about starting a label — Records Collecting Dust.”

The guitarist, who currently plays in White Mule with his cameraman David Robles (also of the bands Wha? and Marsupials), describes the arc between that light bulb and refining the film’s format.

“Initially, it was going to be about hardcore record collectors. But I wanted it to interest people. I realized I should interview musicians that inspired me to become a musician. Black Flag was the first show I saw, at 14. I picked my path in life around seeing them. And here I am, asking Kira Roessler and Chuck Dukowski what made them pick the path they chose.”

Blackmore and Robles are funding Records Collecting Dust out-of-pocket, with Blackmore funneling earnings from his job as doorman at Cheswick’s West. They aren’t sure how the film, which is projected for release by late summer 2013, will be distributed.

“It’s my first time with this,” says Blackmore. “We got hit up for the Don’t Knock the Rock fest in L.A., but we’re not ready. We might throw it at Sundance. SXSW does a film thing.”

Blackmore’s reluctant to reveal the film’s highlights: “I want people to come see it.”

All he’ll allow is, “We saw lots of punk rock. At one point, we got tired of everybody whipping out Jehu records as their local faves. Edward Colver had some really interesting, crazy stuff — old picture discs and Nazi propaganda.”