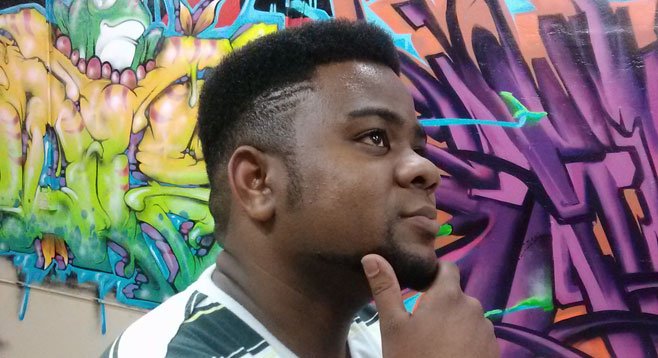 Darrell Waterman remembers the names of the local hip-hop artists who drove a healthy local hip-hop scene when he was in high school (Oceanside’s El Camino, class of 2002). “The old-school cats that inspired me were the Abyss Prophets, Mission Infinite, and Blah. But most of these guys don’t do it anymore. At some point in time they figured out they just had to make money. They took their gamble when they were young. I took mine when I’m older.”

Waterman, an Air Force vet who has a full-time day job in healthcare, has invested in City to City, a 1400-square-foot storefront in downtown Vista that caters to all things hip-hop. That includes clothes, caps, CDs, LPs, DJ equipment, and spray paint. City to City regularly hosts live shows featuring freestylers, DJs, and breakdancers.

“We represent all four elements of hip-hop: MCing, DJ, graffiti, and breakdancing. In February we hosted a B-boy [breakdancing] battle and a B-girl battle. The winner got $100.” The store has large plywood planks and tarps, which allows aspiring street artists to learn their craft.

Waterman maintains there is nothing else like City to City in the county. “Since the Metaphor closed down [in Escondido last year], there hasn’t been a place in North County where kids can go and perform.”

He says so far the City of Vista, his neighbors, and sheriff’s deputies have been respectful when he throws live shows. “We’re still working out the kinks, but we kind of know when it’s time to wrap things up; like, around 10:30 or 11. When we start seeing the cops circling the block, we know it’s time to stop.”

City to City does not serve alcohol. He guesses that about one-fourth of his live-show clientele is over 21. “We usually get, like, 60 to 80 people. We keep it contained and orderly. North County is a fertile ground for hip-hop.”

Waterman explains the difference between his street-art supplies and the spray paint you get at Home Depot. “That stuff is real cheap. It’s not made for an artist. It’s made to coat wood and paint bicycles. Our paint is for outdoor murals and canvas. One of our brands from Germany has 251 different colors and three different finishes.” He sells different sizes of attachments that allow the artist to spray with precision.

I bring up a recent front-page article in the U-T that told of one Vista 17-year-old who was arrested and charged with tagging his personal graffiti logo 900 times in the city of Vista, and that the tagger’s parents are now facing a fine of $266,000.

“That’s exactly why a place like this needs to exist,” says Waterman. “We get the kids off the street and give them an avenue to expand and get past vandalism. There are a lot of world-famous artists, like Retna and Banksy...a lot of guys making a lot of money doing murals for corporations. We want to expand people’s horizons so they can learn they can achieve with this art without getting in trouble.” Waterman says they only sell paint to those over 18.

City to City hosts a free hip-hop show featuring local artists on June 27. L.A. hip-hop artist Reverie headlines a July 5 show. Tickets are $15 at the door or $10 in advance.

Lovely, just lovely. I'm looking forward to cleaning up more artwork on my walls and trees.