Brandon Madrid and his art guitars

Right now, Brandon Madrid is trying to turn a vintage hi-fi record player into a custom guitar. Two guitars, actually. The plan is to have the record player remain functional and to turn each of the speakers into a guitar so that two people can jam out simultaneously, even playing along to a record if they wish. He has made guitars from old record players before, but he also likes to turn vintage cocktail sets into musical instruments. He always leaves the cocktail shakers intact so that it’s easy to mix up Martinis when the music stops. 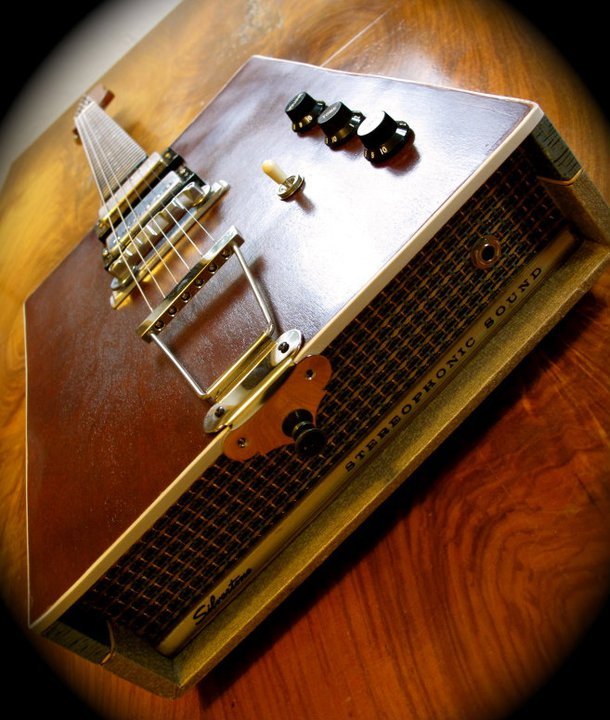 Guitar made from a vintage record player. Photo courtesy of the artist.

But he doesn’t just build funky art guitars, he’s a professional luthier who has built guitars for James Mercer (Shins) and John Reis (Rocket From the Crypt).

For Madrid, building and repairing guitars came along naturally. He has always been a musician, and he learned woodworking as a youth. Putting the two skills together just made sense. He had been involved in the action sports industry following a career as a pro snowboarder, but that sector lost its luster and he went to music.

“The fun side of skateboarding and snowboarding was over, and I was looking for an out,” he says. “I had always played in bands, always played music, and I had always been working with wood, so I just started building guitars.”

In the beginning, he started fixing his own guitars. That progressed to buying beat up old guitars from the Penny Saver, restoring them, and turning them into much better instruments, which he could sell to buy more old guitars. Over the years, that has grown into a full-scale business for Madrid. He builds custom guitars, which can cost over $4000, but he also specializes in repairing vintage instruments. It takes about 140 hours--two weeks of ten-hour days--to build a guitar. 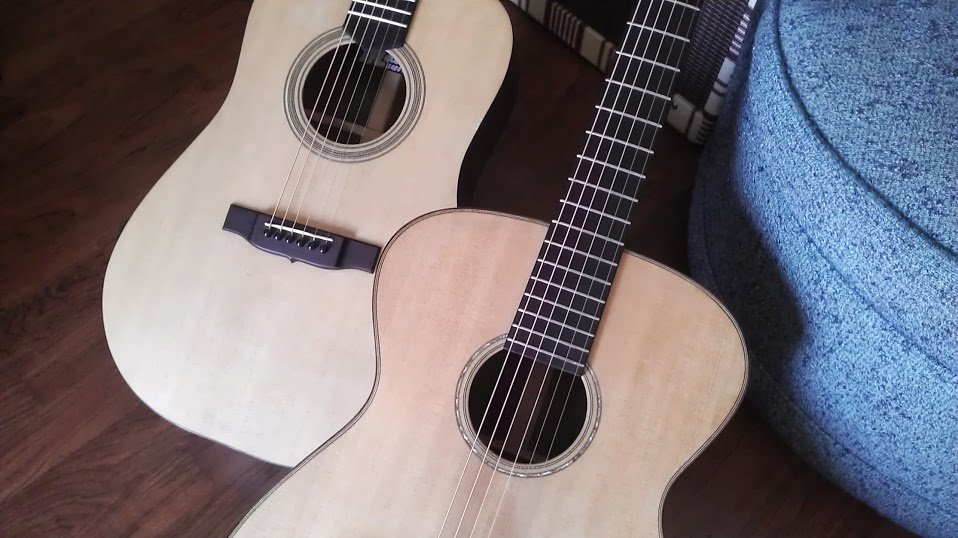 Madrid doesn’t operate like some custom craftsman, taking orders and building to the exacting specifications of customers.

“I have always been crafty and I used to paint a lot, so guitars became another medium for me artistically,” he says. “I focus on being an artist. I’ll build a guitar that I see, just like another artist would see a painting. If you like it, then you can buy it from me. If you present an idea, and I’m interested in the idea, I’ll build you the guitar...but I don’t really like a lot of ideas.”

Rather than hanging in music shops, Madrid’s guitars are more likely to be found in art galleries. He will exhibit alongside his artist friends at their shows if the material fits. He organizes art shows for himself, bringing his custom guitars, tube amplifiers, and collages made from broken vacuum tubes. A few Madrid Guitars are on display at Home in North Park. Madrid has a good relationship with Dave Ross, who owns the store, and thinks Ross’ rock and roll values make Home a good spot for custom guitars. 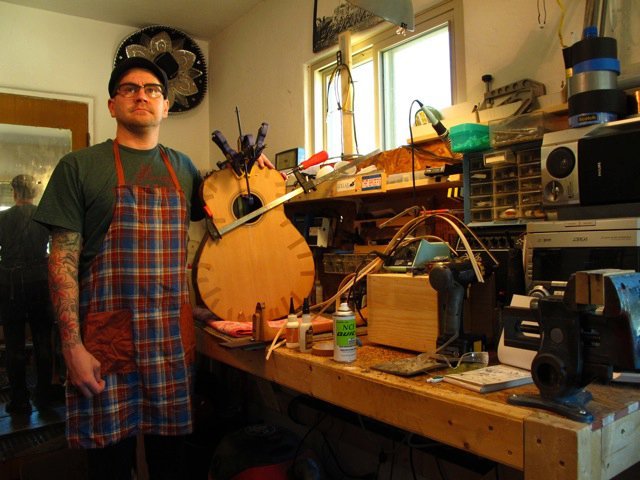 If Madrid would have us take away one thing, it’s that he always builds nice guitars.

“I don’t just take any old cocktail kit, or any old record player and turn it into a guitar. Tone is the most important thing. You can have something that’s really really funky, and it’s not going to sound like it should to everyone’s eyes, but it should sound right.”