Shakeup at the Shakedown 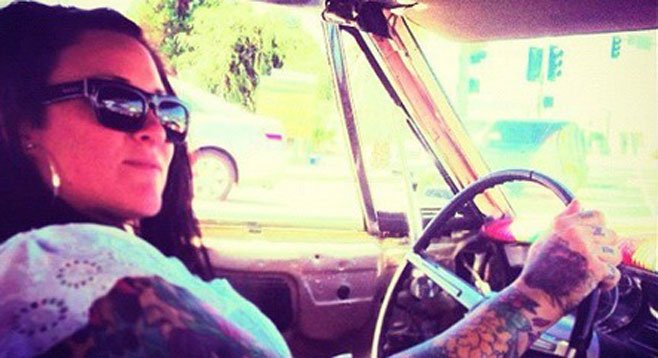 “No — Dead Ted’s not actually dead.” Josh Barnes is on the phone to explain the sudden change of ownership of the Shakedown Bar in Point Loma.

Former owner Ted Thompson, aka “Dead Ted,” is an entrepreneur who not only lived the life but was known to live in the Shakedown’s office from time to time.

According to barman/talent-buyer Barnes, “[Ted’s] spending more time in O.C. and L.A., spending more time with his little boy and working on bikes and stuff.” Which was one of the charms of Thompson’s tenure at the Shakedown: the punk club doubled as his motorcycle repair shop. One got used to the smell of gas and oil. Now that it’s been sold, does all that go away?

“Nothing’s changing,” says Barnes. “Everything that was wrong with the place, she’s been fixing it. The sound has been rewired, we finally moved the stage to the back, and we’re gonna put a roll-up garage door in the front. And a taller fence.”

“She” is Anilee Griffin, former general manager of the Flying Elephant in Carlsbad, owner of Boss Lady Booking, and now, the new owner of the Shakedown. “She took over two weeks ago,” Barnes tells the Reader. “She’s just trying to step it up. Everything’s fixed now. Me and Ted, we made do with what we had. We were broke.” He laughs.

Anilee Griffin, 31, lives in the East Village. She calls herself a tomboy, says the Shakedown’s broads-and-booze image doesn’t faze her. For example, Monday nights, she says, will be a salute to strippers. “We are surrounded by strip joints.” Aside from clearing out the indoor motorcycle thing, Griffin says the club’s image won’t change. “I’ve been into hotrods and motorcycles all my life. I’m from Oceanside, and car culture is really big there. Punk and hotrods — that’s gonna stay.” But she says the future of the Shakedown is to attract more women. “Just moving the stage from the front door to the back made it more appealing to women. It was intimidating before.”