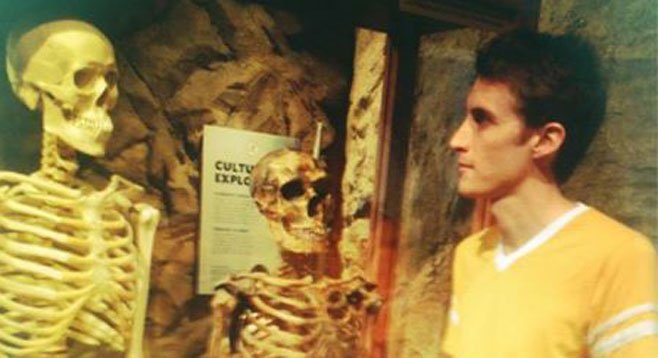 The Touchies’ release party for Mess with the Unicorn, Get the Horn happens June 20 at the Casbah, on a bill that includes Dirty Sirens and Chica Diabla. With its first single “Freak Time” now streaming online, the album includes covers of songs by the Jesus and Mary Chain and Saturday-morning TV characters the Banana Splits.

Also out this week is Neon Cough’s New Adventures in Wi-Fi. “The rib cage on the album cover is a reference to the anatomical theme that runs throughout the album,” says main man Dan Luko. “There are songs on there about hearts, brains, lungs, and skulls. The album was built one piece at a time, like Frankenstein’s monster.”

Heavy Glow’s first album, 2011’s Midnight Moan, is being re-released on CD for the first time on June 26, in an edition limited to 100 copies.

New Archaic frontman Tolan Shaw launches his new self-titled solo effort with a June 27 show at the Belly Up in Solana Beach.

Mike Wofford’s solo piano album It’s Personal debuts June 30 at the Athenaeum Music and Arts Library. “For this concert,” he says, “I will be playing material from the new CD, which includes original pieces of my own as well as others by composers whom I admire from the jazz and pop world.”

On July 14 at Lestat’s, soulful singer/songwriter Chris Carpenter shares the stage with several local ladies at the release party for Up All Night, including Runaways songwriter Roni Lee and violinist Jamie Shadowlight (both of whom play on the album), and drummer Haley Allen (Black Market III, Kiss & Yell). “We’ll be playing the entire album, plus bonuses,” says Carpenter.

The Belly Up will host Candye Kane’s July 23 release party for Coming Out Swingin’, engineered and co-produced by her ex-husband Thomas Yearsley and songwriting collaborator Laura Chavez.

Chris Leyva drops his Summer of Life album on July 27 at Brick by Brick.

Here's several more that got cut for space (lots of new releases this summer!) - Playground Slap's new odds-and-ends album Disco Nausea drops this week, featuring material from their 1982 to 1988 heyday, as well as their 2006-2007 reunions. Marcelo Radulovich says “I reworked and remixed the material and this is the result, a great album, if I may say so myself. Features lots of great players like Mike Keneally and Bill Ray."

Shambles/Manual Scan frontman Bart Mendoza has a new EP with his band True Stories, Comet's Tomorrow, recorded by Alan Sanderson (Rolling Stones, etc.) at Analog Chew. The June 20 release party at Soda Bar will include a one-off reunion set from Static Halo, their first show since 2008, plus Los Angeles resident Adam Marsland, who amongst other things was in the reformed Standells.

Tony Taravella's June 22 CD release show for In a Sentimental Mood at Pathways Community Church in Santee is also a going away party, as he and his family are moving to Las Vegas. The jazz album was produced and engineered by Peter Sprague at his studio in Encinitas, and it features Mike Wofford, Bob Magnusson, Duncan Moore, and Tripp Sprague.

The Electric Healing Sound have a new 7-inch (on the local Cholo Punks label run by Aldo Bustos of Beaters and Northern Tigers) dropping at the Tower Bar on June 28.

British transplant Dave Humphries will release his Across the Pond 7-inch on July 6 at Rebecca’s Coffehouse.

Reggae rocker Pepper have a new self-titled effort hitting the streets on July 16.

Out on bail after being charged with hiring someone to kill his wife, As I Lay Dying singer Tim Lambesis announced that his comedic metal band Austrian Death Machine will soon release its third album Triple Brutal, thanks to raising $80,000 via online crowd-funding.

High Mountain Tempel's upcoming fifth studio full-length Gnosis includes a song called “Once On a Golden Mountain” recorded with Isis Aquarian, whose life with the late Father Yod's sex-and-veggie cult the Source Family was recently chronicled in a documentary film and a comic book one-shot.