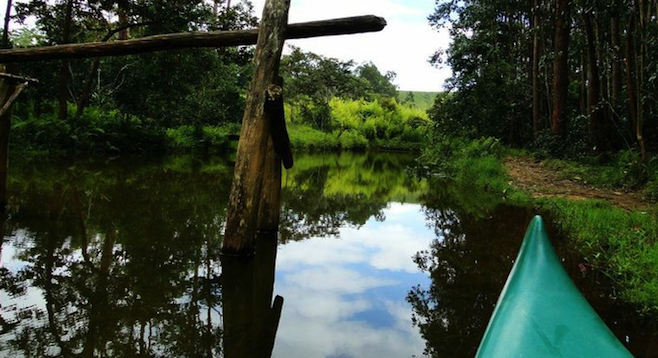 Tina, my male Malagasy guide, planned a trip to the Andasibe National Park and a small lemur reserve. On the walk there we discussed different cultural aspects of Madagascar and his history.

Arriving in the park, I paid the entrance fee, and off we went on the hike. He talked to me about the different plants, bugs, animals, and more about lemurs than I could ever retain.

Soon we were off the main path and in the forest. In the distance, indri lemurs began their morning communication. Granted, this singing was way more of a shriek – but nonetheless it was beautiful. This is the only place where they can be heard. They die in captivity. 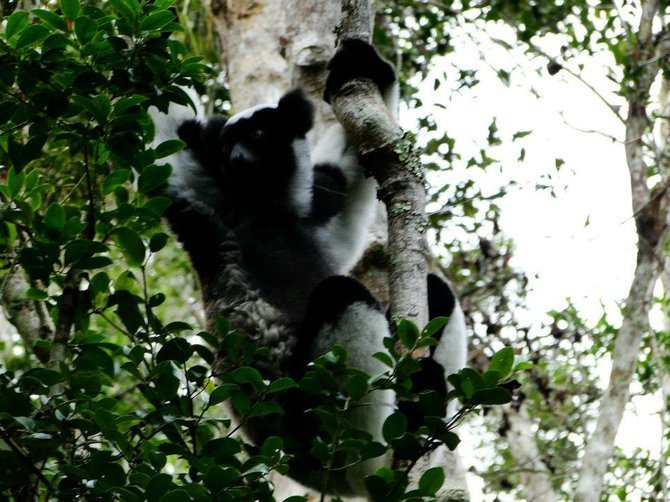 He told me to wait in a clearing while he tried to find some indri that were further down in the trees. Meanwhile, I heard rustling further up the path. In another clearing high in the trees, I spotted the furry animals (left). There I was in the forest, completely surrounded by singing lemurs. One after another they went on and on, like teenage girls at a slumber party talking incessantly.

They stopped and proceeded to start feeding, jumping from tree to tree.

Tina told me he had found another kind of lemur, the Verreaux's sifaka. They jumped from tree to tree so low I could almost touch them.

A few more songs from close indri, and it was time to head to the reserve. 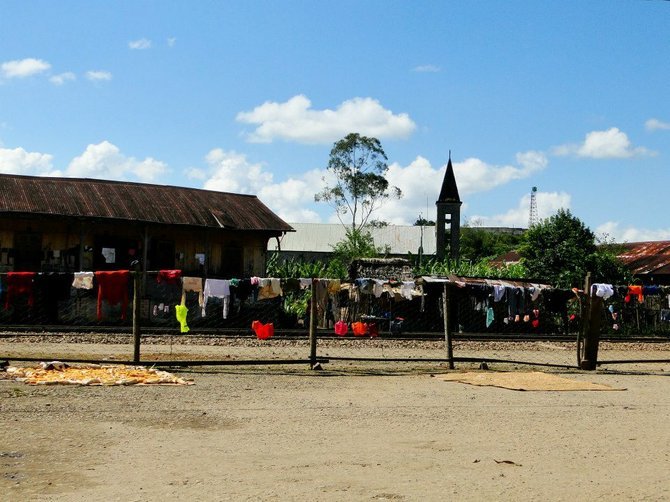 We again trekked the three kilometers to the village. Down a walkway and over the train tracks, there was a large church, small mosque, local market and scattered children, adults, sick dogs and crazy chickens. It smelled how I imagined the Middle Ages would smell.

I refused to pay for a car, so we walked for miles. When we finally arrived, the guide instructed us to get into a green boat moored to shore, and paddled us down a small river until we reached Lemur Island.

Here there were several different kinds and sizes of lemurs. We walked down a path and the next thing I knew, two were on my shoulders. I gave them a banana. One of them started licking me, and I laughed because it tickled.

After a nine-kilometer walk back to town, I paid Tina and headed to the hotel. I couldn’t decide if it was better to smell like lemur love kisses or to take a shower and smell like Chanel. Since I was in Africa, smelling pretty wasn’t a priority. I may as well smell like everyone else.

I stood for awhile at the corner of the turn to Andasibe and the main road. Restaurants lined the street, and I could feel people looking at me. Realizing I could be there for awhile, I sat down on the curb to wait.

I decided I'd take the bus anyway. Even if I got a horrible seat. (Then the question was if there would even be any seats.)

Five minutes later I saw a taxi-brousse coming down the hill. I waved it down, and the driver stopped.

He nodded, and I was ushered into the very back of the van. Breathing a sigh of relief, I thought about other people I know who go on R&R. I'm different. They want bubble baths and relaxation. I was stressed about whether or not I'd stranded in some African town for the night.

This is the divide between vacationers and travelers.

Vacationers purchase travel books, spend money on a more-than-decent hotel where they expect to have prompt service and a shared language. All consumed items are tallied to the bill and paid with a credit card upon checkout. They're picked up from the airport by a man holding a sign who carries their bags. Tours are arranged that include designated restaurants and strict schedules.

Travelers are often trapped by circumstance – but when a need finally boils over, it persists with more craving than a girl on a diet of saltines and water with the desperate thought of a burger with extra cheese. A traveler will forego a one-hour plane ride for a 10-hour train journey on the chance that a brief encounter will shake their world. They've mastered the art of communicating without language. Begrudgingly, they get ripped off knowing that the extra $5 will feed a family for a few days.

Risking the uncomfortable and worse, they'll sleep somewhere off the beaten path because that village looked too special to pass up. Sacrificing being present for births and deaths, weddings and holidays, travelers leave their loved ones for that "one more adventure" before joining the masses and settling down, so to speak.

Traveling can be difficult mentally, physically, emotionally. As a traveler, you don't seek out a postcard. You seek to be challenged by what you see, hear, smell, taste and touch in each experience.

As it turned out, the taxi brousse was headed to Tana and I just kept riding with them. We arrived just after sunset.