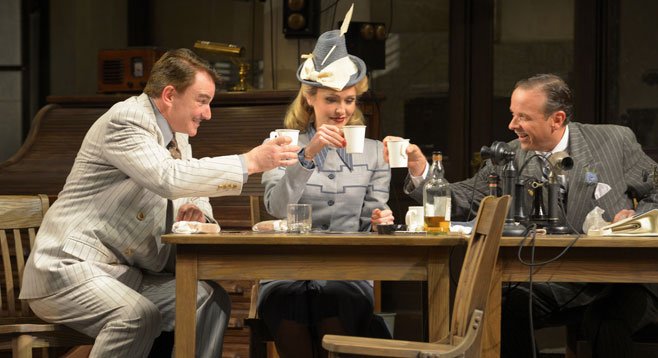 Ben Hecht was a writer’s writer. He won the first Academy Award for a screenplay (Underworld, 1927). He rewrote the first nine reels of Gone with the Wind in seven days. He wrote 35 books and scripted/doctored 70–90 movies. As a journalist in Chicago, he “haunted streets, whorehouses, police stations, courtrooms, theater stages, jails, saloons, slums, madhouses, fires, murders, riots, banquet halls and bookshops.” In 1928, Hecht and Charles MacArthur lambasted yellow journalism in The Front Page (1928).

That play’s most striking feature, still, is astonishingly sharp and funny street dialogue. The authors keep the whole stage alive with a fluid score of tones and moods. There are times when the rapid exchanges have the syncopation and improvisations of jazz. In fact, you could call The Front Page THE Jazz Age comedy.

Howard Hawks made it a movie — His Girl Friday (1940), which Hecht cowrote with Charles Lederer (who also penned The Thing From Another World, in 1952, another feast of dialogue). The biggest change: they converted the male lead, Hildy Johnson, into a woman. In both versions, we see little of the world outside except for the gallows, where Earl Williams, alleged Communist, will soon be hanged. He shot an African-American policeman and has been railroaded to the noose. The reporters say he’s guilty. Their publishers tell them so and measure the “truth” in papers sold. Earl is the kind of “celebrity criminal” decried in Bob Fosse’s Chicago, which pays irate homage to the original.

The only reporter who might ask the tough questions ran off. Hildy Johnson, alpha female and one of America’s best journalists, has had it with her editor/ex-husband, Walter Burns, an alpha-to-the-centauri male who will do anything to get a story. Hildy returns, engaged to a momma’s boy. She flips the press room, and Chicago, upside-down, and rakes the muck from both.

John Guare’s adaptation resets the play to August 31, 1939, the day Germany staged a fake attack on itself, blamed Poland, and invaded the next morning. In effect, Guare perches an ominous cloud — the darkest of the 20th Century — over an erstwhile “screwball comedy.” In a way, the choice recalls G.B. Shaw’s Heartbreak House, where an aristocratic family cavorts and bumbles on the eve of World War I. But the world-changing event weighs heavily on Friday’s characters. It makes Hildy’s harrowing of corrupt Chicago journalism seem almost insignificant compared to Hitler’s vow to harrow the world with Panzer strikes, V-2 rockets, and genocide.

Guare inserts revealing attitudes about the upcoming war: most of the reporters are pro-Hitler. Though true historically, it yanks them from the confines of a comedy. The background often competes for center stage. No matter what these proto-fascists do, even the cleansing of farce can’t redeem them.

This is John Guare, however, whose plays don’t get produced enough in San Diego (Landscape of the Body, House of Blue Leaves, Six Degrees of Separation). What he does brilliantly — though maybe too brilliantly for today’s tweeted attention spans — is write dialogue that crackles like strings of firecrackers. Though he’s less successful at moving people on and off stage (a mob will conveniently disappear while the next scene’s people magically arrive in the same instant). The script matches Hecht and Lederer’s knack for making clipped speeches reveal character and propel scenes forward.

Except for a majority of speeches spoken on the same blaring level, director Christopher Ashley’s staging shows an appreciation for the period and flare of the piece. As do Paul Tazewell’s appropriately bulky, squared-off costumes, Mark Bennett’s original music and sound, and David Lander’s lightbulb-era lighting.

Robert Brill’s micro-realistic set, the glassed-in pressroom, is as intricate as the dialogue. An added touch: it mirrors the corruption it contains. It’s so aged and grimy you can almost smell the mold. The playhouse named Brill — former scenic genius for Sledgehammer Theatre — its 2013–2014 Artist-in-Residence.

Also in the “It’s About Time” category: Ashley cast many local actors! And they deliver: Kevin Koppman-Gue, Mike Sears, Dale Morris, Steve Gunderson (wonderful as Pinkus, the timid nobody who refuses to cave in), Jonathan McMurtry (a hoot as a lost priest), and James Saba (recently named new head of SD Junior Theatre — he’s perfect for that post).

Mary Beth Peil makes Mrs. Baldwin the mother-in-law from hell (she’s convinced that Jane Austen ruined civilization). Donald Sage Mackay’s Bruce Baldwin gets caught in a trap. To be funny, he must be a right-wing wimp, which Baldwin does quite well.

But what could Hildy possibly see in him? Even when emotionally distraught or on the rebound? The persistent question detracts from Jenn Lyon’s otherwise top-notch Hildy. She’s brassy, dead certain, and disillusioned. And blind?

As Walter Burns, Douglas Sills hauls large portions of the play on his back. Even though the character is one-note insistent, Sills makes Burns’s desperate banter a verbal tour de force.

The script wants to be one, too. It starts with a home run (the original play and film). But Guare tries to make it do so many things — like touching all the bases at once — it’s a forced tour de force.