Teachers want it postponed, others don’t 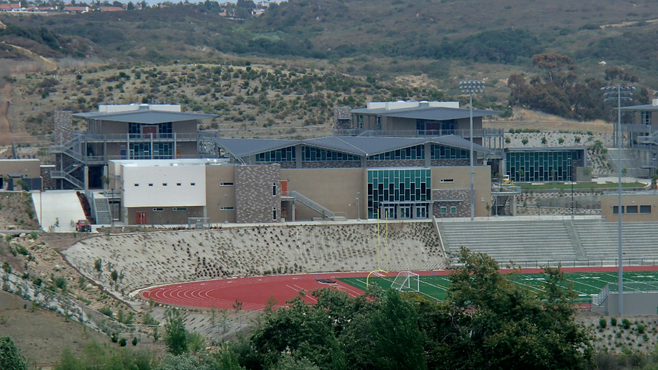 At the northeast corner of College Boulevard and Cannon Road, the Carlsbad Unified School District’s new high school is prepared to open this fall.

The environmental setting of the project site required the resolution of various issues. The EIR process began in March 2007 and addressed traffic circulation, the eastward extension of Cannon Road, and established a 110-foot buffer between Calavera Creek and any campus structures. The construction effort could not generate noise during the least Bell’s vireo nesting season and corresponding noise monitoring was put in place.

The school district was required to purchase wetland mitigation credits with oversight from affected resource agencies. In addition, the district established a coastal sage restoration area to the east of the campus site.

The EIR was certified in January 2010 and was followed up by a U.S. Army Corps of Engineers permit with consultation by the U.S. Fish and Wildlife Service. The Division of the State Architect also reviewed and approved the project.

Construction started in October 2010 and in April 2013, the district took control of the site. The campus has an athletic stadium, ball fields, gymnasium, 42 classrooms, 6 science labs, a library, parking, and administrative support structures. The school design implements natural lighting, storm-runoff collection through vegetated bioswales, and native landscaping. The stadium has lighting for night games.

The site has been designated as a high school location on the city’s general plan for several years and is set to open for its first freshman class on August 28, 2013.

In January of this year, the Carlsbad Unified Teachers Association called for the school opening to be postponed; the association expects that the construction cost of the school (projected at $104 million, according to a district document) will affect the budget and thus the employment of existing teachers. The school's operating cost is expected to be about $1.2 million per year, according to Carlsbad Unified School District trustee Kelli Moors. Meanwhile, other community input urged the opening of the school this fall to establish the freshman class without delay.

Do not postpone! Carlsbad High is overcrowded and we have more than enough demand for a new high school. It is in the best interest of the kids.