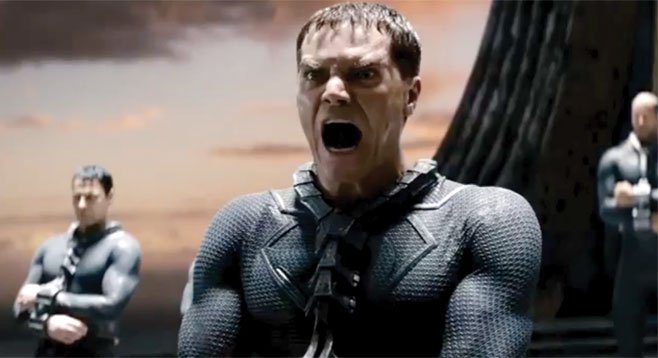 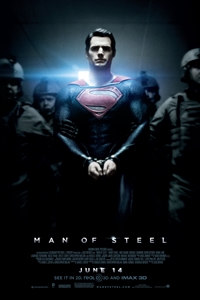 Zack Snyder sucker-punches Richard Lester’s Superman II to date Hollywood’s final say on how to film a comic book. Credit the man of steal and screenwriters David S. Goyer and Christopher Nolan with adding a couple of new wrinkles to the designedly faded red cape of Krypton’s favorite son.

By now, the tale of an otherworldly father fighting to spare his super-tot from cataclysmic uncertainty — all the while scratching an itch to propagate his race — has been sown deep in the furrows of America’s collective consciousness. Rather than commencing an adventure — preferably ones not involving a school bus in peril or bad-mannered oafs getting their long-awaited comeuppance — we open on Krypton with Jor-El (Russell Crowe) once again preparing to act as his son’s prerecorded “How To” manual from beyond.

Henry Cavill is the first Superman to have a membership at Krypton’s 24 Hour Fitness and Amy Adams is Lois, the latest in a long line of Lanes. As evidenced in their Dark Knight trilogy, the team of Goyer and Nolan never were big on romance. Lois is wise to Clark’s secret ID almost from the get-go. The dynamic screenwriting duo effectively kneecap the mystery and romance in favor of a Lois who acts more like Superman’s agent than his love interest.

Snyder tries to keep it fresh by juggling the chronology of the familiar opening passages. Never before have we experienced what it must be like for young Kent to come to grips with new-found powers of super-hearing and x-ray vision. In this director’s universe, that translates into doubling the imagery and rattling the camera.

General Zod failed to connect with fanboys when first he graced the pages of Adventure Comics back in 1961. It wasn’t until 1978, when Warner Bros. introduced the character to movie audiences, that his reputation began to rise. As one of the last surviving Kryptonians, Terence Stamp endowed the good General with haughty elegance; his purring arrogance suggesting a blueblood living every day of his indomitable life as if it were his first.

As this year’s Zod, Michael Shannon comes off looking uncomfortable beneath the Marc Antony shingling and u-shaped Penn Jillette chin-bristles. With Snyder to guide him, Shannon pitches his performance at two levels: growl and grumble. Zod’s underlings, Ursa and Non, consummately realized in the Lester version by Sarah Douglas and Jack O’Halloran, are reduced to background ornamentation.

The achromatic design is a calculated ploy on the part of the writers to re-create the recipe for success found in their blackened servings of Caped Crusader. Turns out it’s not that easy being invincible; for once, we have a Superman whose greatest enemies are boredom and his own indestructibility. In place of hanging a left down this avenue of pursuit, Snyder hit a brick wall by staging an endless (and paradoxical) third act battle to the death between CG immortals.

With Diane Lane, Kevin Costner, a ubiquitous Christopher Meloni, and Laurence Fishburne as the first black Perry White. Can I get a “Great Caesar’s ghost”?