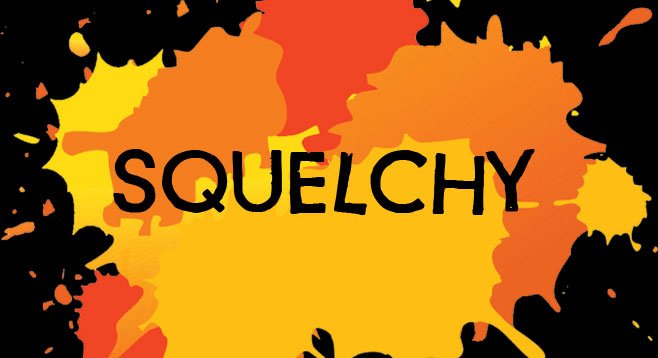 I don’t read everything you write, but the last five food reviews I did read used the word “squelchy.” I suggest you lose the word. It was kind of descriptive the first time, but really sounds silly now.

A Solution for the Disenrolled

What a horrible change the casinos have wrought within the tribes (June 6 cover story: “Can You Find the Big Secret in This Casino?”). There is no recourse for the former Pala members (and the hundreds of others this is happening to), due to the manipulations of their current executive committee.

I understand how the cultural gulf caused by generations of abuse and mistrust makes reaching outside the tribal system almost unthinkable. But I hope these folks will do just that, and go to all California voters for help.

You can create leverage from the outside. Petition state legislators to amend Proposition 1A to make gaming licenses contingent on mandatory participation in an intertribal council that would have the final authority on appeals regarding tribal enrollment.

The Spirit of Margarita Brittain

Regarding the June 6 cover article, “Can You Find the Big Secret in This Casino?”

As a non-Indian who has had occasion to interact with various Pala tribal members since the mid-1970s, I feel that if Robert Smith were to have the misfortune to be visited by the spirit of Margarita Brittain, he would not come to rest in the sanctuary of Chinigchinich.

I’m calling about the article you have in the Reader about the casino (“Can You Find the Big Secret in This Casino?” June 6 cover story).

There’s much more going on. You should dig deeper into this story. There’s a big story here.

I have lived and worked in Ramona for almost 30 years and was shocked to read the article where Moss Gropen reported on our town (“You Can’t Pet a Solar Panel,” May 28 cover story). I doubt the author is even a homeowner in San Diego County. I know nothing about the author, but this person surely does not know anything about Ramona.

The article looked at some old parts of Ramona, which can be found in any town in our county. Maybe someday Moss Gropen should come up here, and I will give him a personal tour. I am sure he will find that more than the sun shines all year-round in our town. You will always find a smiling face.

Wow. I am still shocked on how Ramona was described.

Agonizing on the Cross

Pastor Michael Brown (Sheep and Goats, May 30) forced me to ask myself why I believe in Jesus Christ.

I believe in Christ not because the clergy is convincing, and not because the Bible is convincing. The words written by long-dead Jews are worthy of reading, but I asked myself after Pastor Brown said we have “to make disciples of Christ,” what it is about Jesus that has drawn me to him.

The absurdities and the buffooneries of the three monotheistic religions notwithstanding, Jesus is what he did — which is the cross. Because all the parables and all the preachings had been said, and would be said in a similar way by the other sages. It is the crucified Christ who speaks to every human being. Clergy, bibles, liturgies, and cathedrals mean little. It is only his figure, agonizing on the cross, who would rise again, that holds me and you.

Substance abuse and mental disorders often destroy relationships, and cause tremendous pain within families. Bryan Chang’s problems will likely impact his family and friends for years, regardless of what happens to him in the legal system. It seems the only “good” thing to come from these circumstances is that his mother’s suffering is finally over.

The Persecution of 16th-Century Priests

In the last few weeks (May 23 and June 6), the Sheep and Goats column has celebrated the lives and works of certain activist priests in 16th-century England (Laurence Vaux, and Robert Parsons).

The other side of the story (well-presented in the movie, Elizabeth, with Cate Blanchett in the title role) is that the Jesuits and other priests were actively seeking the overthrow and execution of the queen. What was intended to follow was the forcible return of the English people to the Catholic fold — and no doubt a return to the persecutions inflicted by Elizabeth’s sister and predecessor, Mary Tudor (“Bloody Mary”).

As it turned out, the English, even those who remained Catholic, had their fill of religious strife. They supported Elizabeth out of patriotic nationalism, and the Jesuits never got a foothold. It helped immensely that Elizabeth herself was ahead of her time in matters of religious tolerance. She once declared, “There is only one Christ, Jesus, one faith. All else is a dispute over trifles.”

It is true that there were persecutions under her reign. But, “The persecution…was prompted by political necessity, not religious fanaticism .… The priests who were executed had committed crimes against the state, and were perceived as a very real threat to national security.” — The Life Of Elizabeth, Alison Weir, 1998.

Sue Garson has it wrong (Letters: “Kafe Hitler,” May 16). It’s as if someone opened an Austrian restaurant and then renamed himself Schicklgruber.