It’s the first oasis after you cross the deserted canyons from City Heights.

These are desperate times.

I’ve promised Carla a meal and it’s heading for nine o’clock at night and I’m still traipsing across the bridges over the open wound they call Chollas Creek. No bus, no eatery in sight. No nuttin’ in sight. Hardly a sidewalk for folk who actually - hello! - use their feet the way the Good Lord intended them to, to walk.

I make it up 47th to Federal Boulevard. Actually, it's 8.25. I’ve got ten minutes till the one bus still operating around here is due to show. The #13 should be trundling up this hill at 8:35 and get me to Euclid Trolley. Connection there’s tight, so I've gotta get something here or there’s no point going home.

Then: Thar she blows! On the larboard bow! An eatery. An Italian eatery, open, right at the corner of 47th Street and Federal Boulevard. Pretty much the one light in the night. And right across from the #13 bus stop. 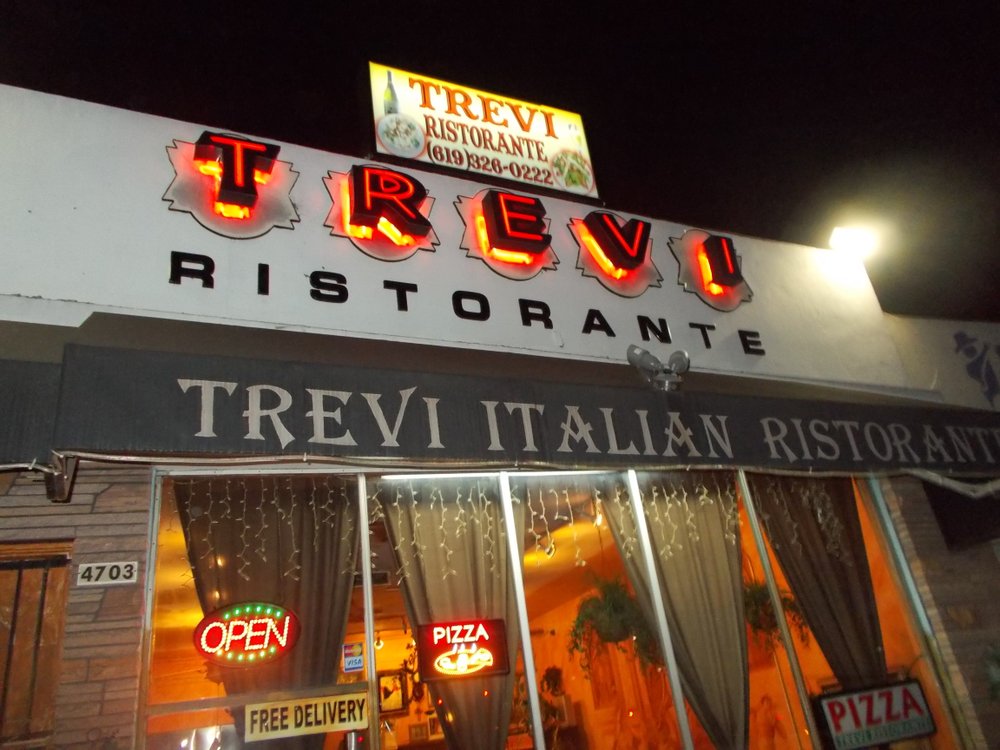 Nano-seconds later I’m across and heading in past a rack of vans with big pictures of a fountain with naked nymphs all around it, all parked in front. 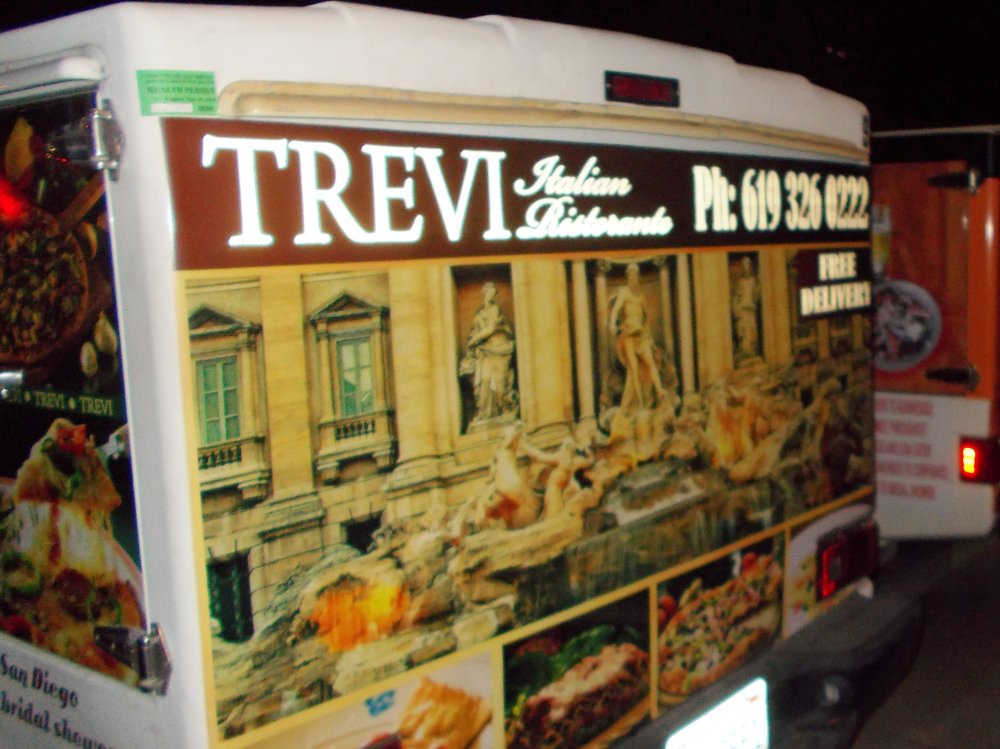 Inside, a mural of that same fountain fills up one whole patch of wall. Ah, right. The Trevi Fountain? Rome? “Three Coins In a Fountain"? Ever hear the song ("…Which one will the fountain bless?”), or see that movie, three American girls find romance in Rome…this fountain’s the one they threw their good money into.

The place is full of lions and murals of statues. 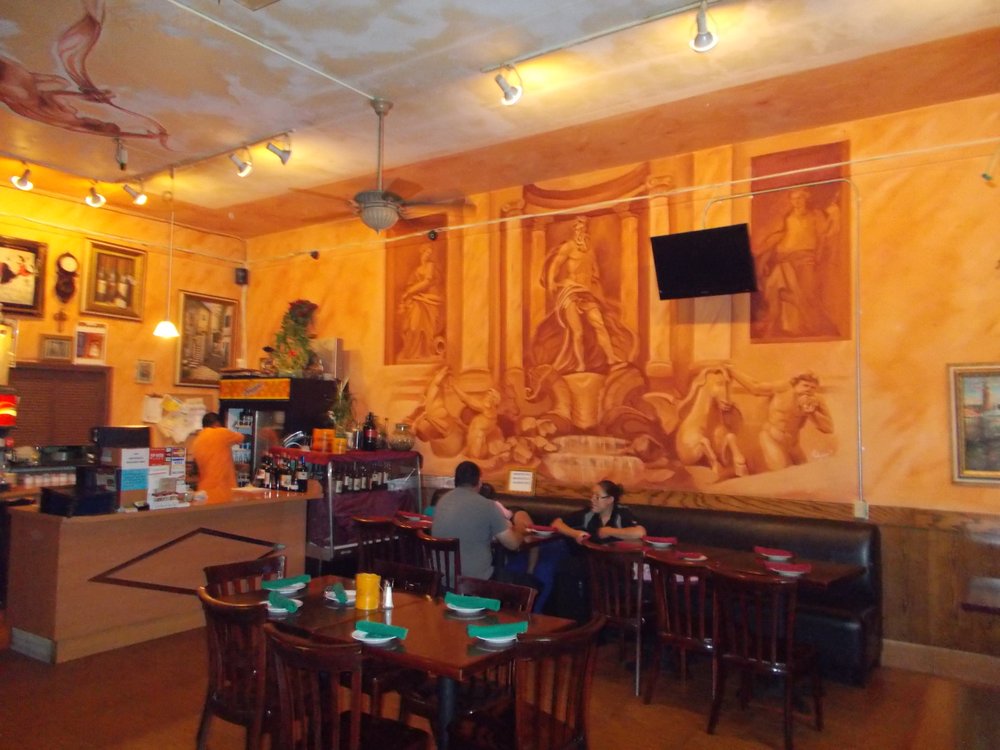 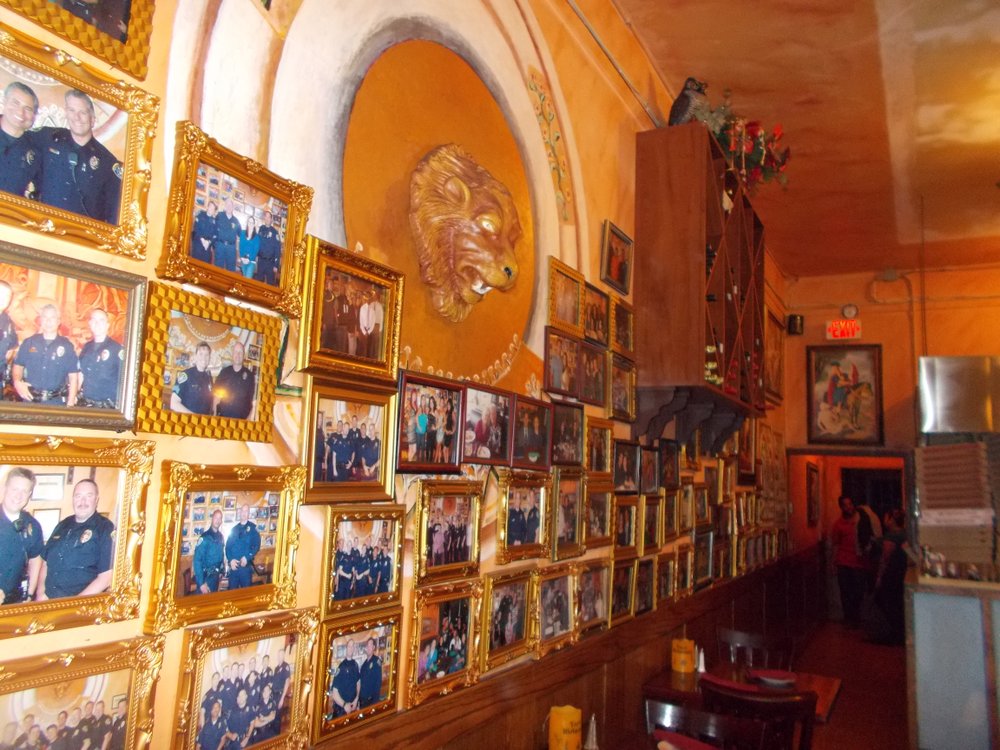 But no time for an art tour. I go straight to the counter at the back. Two guys are there, Romiro Romero, the manager, and Julio Mendoza.

“Guys,” I say, “emergency! Do you have a like pizza I could take straight away, without you having to bake it first? Any flavor will do. Number 13 bus, coming in three minutes. Wife will kill, slowly, if I don’t bring home no pizza.”

Julio looks at me, at the pizza chef behind, and at a small pile of boxes. He goes over.

“Well, this is for delivery but…”

He brings it over. Looks at Romiro. Romiro nods approval. They open it up for me to see.

Wow. Not only instant, but a heckuva deal too. The box alone must be worth $2. I can see bits of sausage, pepperoni, ’shrooms, looks like…

Turns out these guys have a way-big home delivery business going. That’s what the half-dozen vans are doing outside. Logical, I guess, with clumps of houses separated by miles of empty hills and valleys around here.

I haul out of there, swearing I’ll come back, if nothing else to check out the artwork properly, and to have what they promise in their logo: "A taste of Northern Italy."

And lo and behold, the #13 appears, laboring up that 47th Street hill I just walked up. Red light gives me the opportunity to cross to the bus stop. Climb aboard with da box. I'm a popular guy. Everybody has to lean in to smell the delicious aromas.

And thus it is that instead of a raging tiger, I come home to a purring pussy cat. Carla even gives me one of the four slices. Mmm. Rich, sausagey, and surprisingly moist, even after being reheated.

Between lunges at the pizza, she asks me how I found this.

“You don’t wanna know,” I say. But boy am I happy I did. Last time Carla gave up on me she ordered from Domino’s. Thirty-five bucks. Ouch!