Some gal pal Donna Lee Darling turned out to be 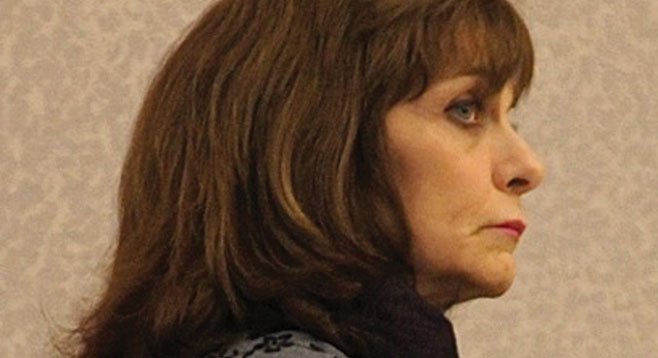 Back in 1995, when Benjamin Farber was 74, he met Donna Lee Darling, who was 43 years old then. “We met in the workout gym,” Farber said, and the two “seemed to get along well.”

Farber and Darling tried living together in 1998. Farber invested $15,000 as a down payment for a house in Vista, and the two lived as roommates there. But it didn’t work out. Farber abandoned the house to Darling, and he moved to a trailer park in nearby Oceanside that same year.

At the trailer park on Blue Sky Lane, Farber enjoyed the warm sun and ocean breezes. He lived there 14 years and kept in touch with Darling over that time.

“Money has always been her big problem,” said Farber. He said she spoke of money troubles “quite a few times.” Darling told him her credit cards were maxed out and that she had car trouble. Farber said, “I’ve given her probably about $3000.” He figured it was a gift, because “I knew she didn’t have the money to pay me back.” Darling tried to make her living teaching yoga classes, but as time passed, her class shrank to just a few people, according to Farber.

It was mid-summer of 2012 that Darling most recently asked him for money, as Farber remembers it. He was compassionate and cared about her, and he even put Darling in his will. “Because I was good-hearted…. She was in my will. We’ve taken her off. Since this incident.” 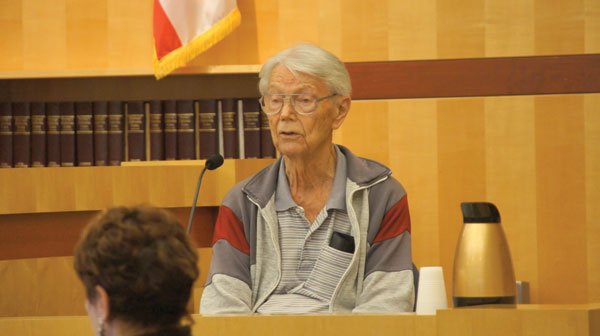 “She was in my will,” Benjamin Farber said of Donna Darling. “We’ve taken her off. Since this incident.”

A Scary Summer
Farber’s first scare the summer of 2012 happened in July. Even though he was 92, Farber always enjoyed his daily walk, often inside the local Walmart. When Farber realized that he was too tired for his normal walks, he went to see a doctor. He was diagnosed with prostate cancer.

After his cancer treatments, Farber went home to recover but soon decided to move to a place with “assisted-care living” in nearby Carlsbad. Farber began to pack up all the things he had gathered during the 14 years spent at his home in Oceanside and put them into cardboard boxes.

At this time, between hospital and moving to the assisted-living facility, Farber got a temporary live-in care-giver, a petite Filipina woman named Marlene. “She kept an eye on me. She did some cooking.” Marlene stayed with him 24 hours a day.

Marlene was placed with Farber through the Nightingale Health Services agency. That agency required her to keep constant notes; for example, whenever Farber had a guest or took a nap, Marlene made a note of it. She had been there about ten days before Darling came over. 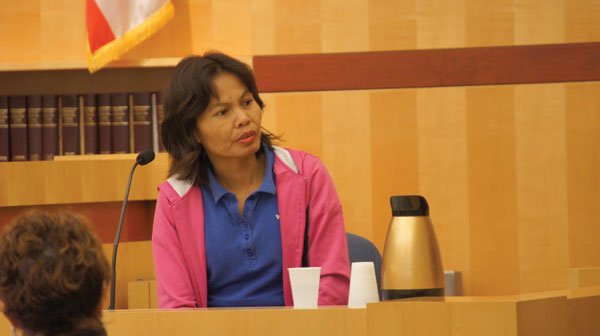 Farber’s care-giver Marlene testified, “I saw a pillow was in his face. And I saw a sweater was in his mouth.”

A pillow over his face
“She showed up on her own,” said Farber. “I never called her and asked for her help packing.” It was Thursday, August 16, 2012, when Darling came over. “It was in the afternoon.” Sixty-year-old Darling offered to help. “She came in with a packing box.”

First Darling sat and chatted with Farber. It was a hot afternoon, and after awhile Darling asked Farber if he wanted a cool drink, he remembered later. “It was unusual for her to offer me a drink that way.”

Darling got a can of Glucerna from the supply Farber kept in his fridge. “It was my favorite drink, a kind of chocolate drink.” She decanted the chocolate drink into a cup. Farber said he usually just drank from the can. “She urged me to drink out of a glass, which I didn’t want to.”

Farber said he didn’t want to finish the drink because it didn’t taste good. He also claimed he could see a “residue” in the cup.

Farber said that within a few minutes he felt weak, so he went to lie down in his bedroom.

“Pretty soon Donna came in,” Farber said. “She kneeled down by my bed.” Farber said Darling kept repeating, “‘No pain, no pain.’” He didn’t know why she kept saying that. Then suddenly a pillow was slapped onto his face “with great force.” Farber said he couldn’t get his breath. “I tried to get my head out where I could breathe. And I was trying to yell for help. I yelled for help, a couple of times.”

Farber said he tried offering his attacker money when he could get a breath to speak. “I was just trying to save myself.”

After three to five minutes, Marlene came into the room and asked what was going on. “She got off me then.” Farber said the attack stopped abruptly. “Donna had been straddling me, holding me down.”

Farber said his arms had been held down but then he was able to sit up and he reached down beside his bed. “I took my house slipper, slapped her across the head with it. She said, ‘Ouch!’”

Marlene said that when she came into the room she could see Darling leaning over the elderly man, and then “they split.... And I saw a pillow was in his face. And I saw a sweater was in his mouth.”

When she looked at Farber, “He was shaking, he was scared.”

Police later collected a gray sweatshirt that had fresh blood on it, which Marlene said had been stuffed into Farber’s mouth. “Mr. Farber removed the sweater from his mouth. I saw it,” Marlene insisted at a court hearing in January 2013.

Darling was arrested the same day as the incident. She soon bailed out and remains at liberty until she goes on trial for attempted murder and elder abuse. She’s pleaded not guilty to both charges. Her next court date is June 25.■
(@evaknott)

Our caregiver Marlene saved Mr. Farber's life. She was his guardian angel that day.

Defense attorney Herb Weston has gotten many delays, but today he confirmed a trial date of May 20, 2014, for his client Donna Lee Darling. She continues to plead not-guilty to charges of elder abuse and attempted murder on the 92-year-old man. 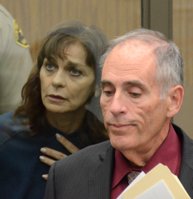 Photo when Darling was first brought into court, in 2012. by Eva Knott