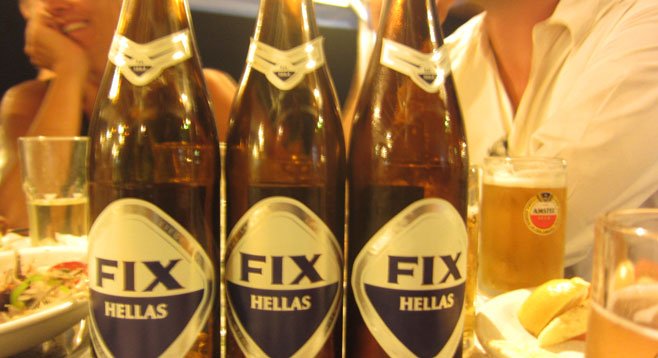 From: Bulgaria (at the moment)

I drank a beer, standing in the doorway and getting the cool breath of wind from the street.

After a week in Greece, I’ve decided that my favorite Greek beer is “FIX.” It’s a fitting name, maybe too fitting. It kind of makes me feel self-conscious when I order it, as if I’m a borderline alcoholic who hasn’t yet come to grips with my addiction. I can’t avoid the word and its English meaning. Every time I drink it I see the big label right in front of me: FIX. When I’m hot and thirsty and ready for a beer, I visualize the can or glass bottle: FIX. It doesn’t help that the heat here compels me to drink it more like water than an alcoholic beverage. Yes, drinking FIX has made me start to question myself: How much beer do I drink? Am I drinking too much? And am I addicted to it?

At the very least, drinking a beer called FIX is a reality check — like having to fill out the form in the doctor’s office where you have to mark the box next to how many alcoholic drinks you consume in an average week. Well, imagine thinking about that doctor’s form every time you order a drink! This beer might as well be called “fiend,” “addict,” or “the shakes.” [Editor’s note: There is in fact a Belgian strong ale branded Delirium Tremens.] I’m at the point where I’m tempted to copy my girlfriend and order red wine just because, psychologically speaking, it would be easier.

Usually, I have maybe a beer a day with dinner. Sometimes, I have two or three at a happy hour — sometimes more — but that’s it. Now that I’m on vacation, I’m drinking about three or four a day, sometimes five —one or two during the day and a few more at night. Not a big deal, but I’ve been on vacation now for at least two weeks — arguably much longer. So, those five a day, sometimes six (multiplied by 14 days or more) are now on the spectrum of alcoholism, right? I guess it depends on who you ask. Of course, “alcoholism” is a strong word, which is why I try to avoid using it. But if I consider that I’ve been drinking multiple beers every day and factor in that the beer I drink here is called “FIX,” that I’m a writer, and I’m currently reading Hemingway, then we’ve got a dangerous mix.

Consider this: I know all of five words in Greek — yassas (“hello”), efaristo (“thank you”), kalispera (“good afternoon”), parakalo (“you’re welcome”), and FIX. Most of my Greek language exchanges are at walk-up bars and go something like this:

Then the bartender repeats FIX in the affirmative and pulls one — preferably a bottle — out of the fridge. He puts it on the counter and I imagine that he’s the devil incarnate.

“Parakalo,” he tells me and smiles. The spikes in his hairstyle look like horns. I turn to the bearded, chubby, gray-haired man to my left. He’s wearing Speedos and sipping a margarita. He looks a little like Socrates, so I imagine his margarita as hemlock. I walk away from the bar with my FIX, happy — having used every Greek word I know — yet feeling like an afflicted beer aficionado.

The other thing that’s strange about drinking FIX is that it doesn’t even sound Greek or sound like a beer that tastes good. It sounds more like the name of an industrial glue or a multipurpose cleanser. So I’m thinking I might start to drink Alpha or Mythos just because it sounds more Greek and doesn’t make me feel like such a junkie. Though, the truth is, at the end of the day (which is literally right now), I’m not all that worried about my beer intake. If I was truly guilty or self-conscious about it, then I wouldn’t be sitting here in front of my computer, drinking another FIX.