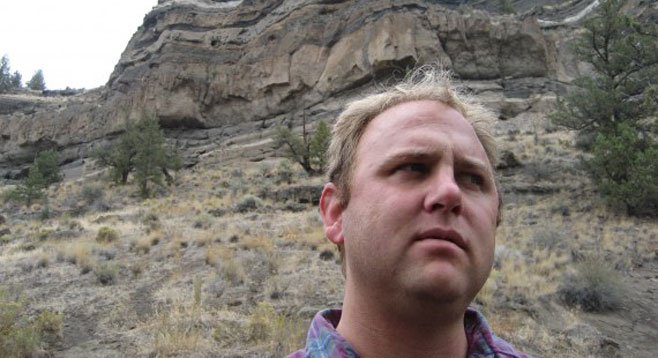 Encinitas resident Nathan Young is part of So Say We All, a collective he describes as a “writing group that’s blown ourselves out of proportion.” On the final Thursday of every month, the group hosts a storytelling showcase called VAMP at the Whistle Stop in South Park.

Adam Gimbel is a veteran performer in another sense. For years he has fronted San Diego bands such as Geezer and Rookie Card, so he is no stranger to manning a mic in front of crowds. After watching some of his friends performing at VAMP, Gimbel decided to take the plunge and soon learned this is no open-mic night.

According to Young, potential storytellers must submit their ideas to the collective, who then choose the six to eight best offerings to run through their vigorous critiquing/refining process. “Performers” then make edits to their pieces based on the critiques and then send the pieces back for another round of edits. After this, they meet with their fellow performers for a round of group feedback, and then each performer has a one-on-one session with a performance coach — a step of particular importance, according to Young.

“We really feel like this is what sets us apart,” Young explained. “We don’t want our performers standing up there with their head down, reading off the page. We want them onstage with their head held high, giving a well-rehearsed performance.”

“I thought dealing with a performance coach was going to be annoying,” Gimbel tells the Reader. “I’ve been performing onstage for a very long time. I thought I knew what to do, and I knew I wouldn’t be able to do it for one person. That’s always harder than a room full of people reacting. I found it hard to ‘perform’ for one person, but hearing me reading so poorly for my coach made me painfully aware of how I should be reading. I might not have rehearsed it out loud otherwise, and it would’ve been a disaster.”

Gimbel feels that the pressure of this type of reading surpasses that of the typical rock show.

“It was definitely more nerve-racking. I’m usually either hiding behind a character or a loud guitar, and it felt deathly quiet to have that many people, packed into that small of a space, all listening intently.”