Pantsless in the streets 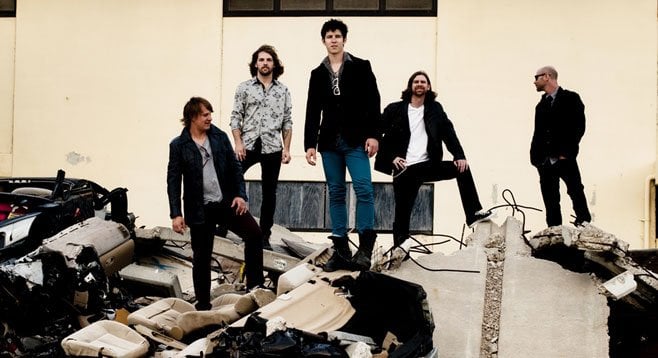 “We wanted to have something that represented chaos and congestion that is often the life we live, with the diverse traffic of our everyday lives,” says Mad Traffic singer Blaise Guld of their new City EP, which sports a cyberpunkish cover rendering the band’s logo as a mechanized urban cityscape. “The cover art was digitally rendered by our friend Tony Washington, who designed artwork for Lady Gaga and the Teenage Mutant Ninja Turtles franchise.”

The group was recently interviewed by former Playmate of the Year Jessica Hall on the new SiriusXM show Playboy’s Happy Hour. “Our lawyer Jeremy Evans went to high school prom with Jessica,” says Guld. “He gave her a call, and we were interviewed at Playboy Studios in Los Angeles. We played a few songs and told some raunchy stories.”

Such as? “Some funny X-rated backstage tour stories. They’re not appropriate for the Reader.”

The road reminiscences Guld is willing to share for print begin with their first SXSW appearance last year in Austin, Texas. “That trip changed the way we looked at each other, as people and as a band. The true test of friendship is being crammed into a van together with a bunch of musical equipment for a week straight.”

One gig found them playing at a photo shoot for Shure Microphones. “The photographer’s assistant started buying our fans shots, then buying the band shots, so, needless to say, things got crazy. Everyone was drunk and, after the shoot, there was major chaos. Their wardrobe mistresses packed everything up, including some of the band’s clothing! So some of us left drunk and pantsless onto the streets.”

They found themselves missing something else after a New Year’s Eve performance. “We played a gig at a house party so we could earn some extra money for the band, [and] it was a really hard place to get to and load equipment up crazy narrow stairs. We played for a while to about five people, because nobody came to this guy’s party! When we were done, he told us he couldn’t pay us because nobody showed up. Boo!”

Mad Traffic appears at the Harley Davidson dealership in El Cajon on June 15, and at Mother’s Saloon in Ocean Beach on June 22. “We’ve been pounding away in the studio and plan to release a new single every month until late this year,” says Guld.

The Playboy Happy Hour show mentioned in the article will begin streaming online on Thursday June 13, from 4-5pm at http://playboyradio.com .