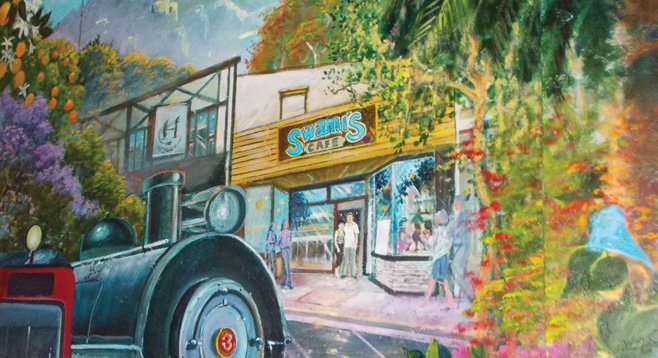 First, the song coming out of this eatery — “You Don’t Own Me.” Leslie Gore. I know it ’cause Carla sings it every time she thinks I’m pushing my weight around. Me. Ha! I’m not just one of your many toys… But when we’re eating in some diner, and I’m hinting about how some of the cheaper things are the best, she’ll break out with the chorus. And don’t tell me what to do / Don’t tell me what to say / And please, when I go out with you / Don’t put me on display.

Actually, Carla has a pretty good voice. Me, I just smile at the other customers like I’m her manager.

But standing here tonight, foot in the door so I can hear that danged song, I notice a second thing: a big blackboard menu. It’s right in front of me. 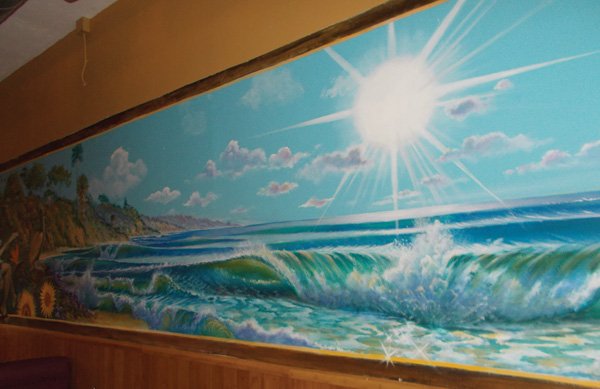 Oh, wow. Desayuno. If only.

See, this is eight o’clock at night, on the main drag in La Mesa.

On the other hand, I’m not gonna be home for three, four hours. Had nothin’ all day except two coffees. This boy is suffering!

What the heck. I head on in.

It’s only inside that I realize this is Swami’s Café. You know…Swami’s? The meditating surf-dudes’ bean-sprout-eatery/shrine up in Encinitas? Has to be the same folks, ’cause the walls are covered in good original surfing murals; like, for instance, a long rolling wave on the right-hand wall. Almost makes you want to head up the road and surf Lake Murray.

Now I’m at the counter in the back.

I’m free and I love to be free…

Jennifer comes out from the kitchen.

“You’re not still doing breakfast, are you?” I ask. “I saw the ‘specials’ board…”

“Oh, yes, we serve anything on the menu — breakfast, lunch, dinner — all day.” 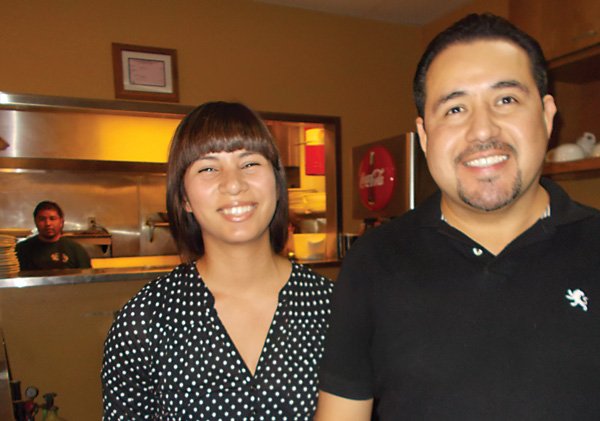 Hey, hey! Some of that laid-back Encinitas attitude’s seeped down here.

She gives me a menu and I take it over to a table. Hmm…the list for breakfast alone is huge. Wheat grass, for starters, is $1 per ounce. Spirulina with a bunch of fruit is $4.95. A garlic-chicken omelet is $7.95. There are about a dozen other omelets at the same price or cheaper.

You can ask for organic eggs, but they’ll cost you $1 extra.

Chorizo…that’s what my eye keeps going back to: #1 on the specials list, chorizo hash. It’s got — aha! — pork chorizo. Good, ’cause no way I’m asking for the soy version. That pork taste is everything. And the fat makes for a juicier, less dry chorizo. You also get potatoes, green peppers, tomatoes, jalapeños, feta cheese, two eggs any style, and toast. It’s a dollar more at $8.95, but I go for it.

While I’m waiting, I listen to the music. All retro, but nice. “Come Softly to Me,” “This Magic Moment,” “Backstabbers,” “I’m a Believer.” I’m also checking out the room. Twelve antique light-fans. Lots of browns and mustard colors. Rattan tabletops under panels of plastic. It has a settled feel, like La Mesa itself. 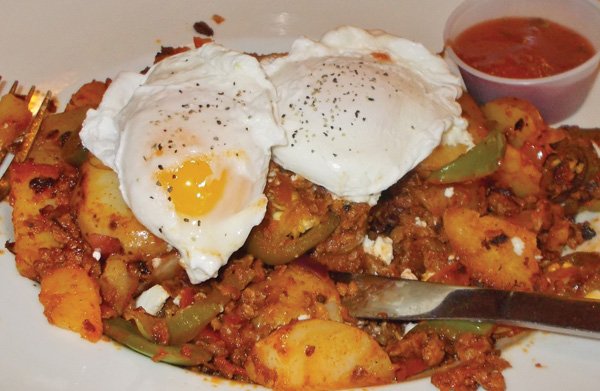 But the murals! Brilliant blue surf, of course, and a collage of green La Mesa scenes, including the city’s old steam train and a trolley, Mount Helix in the background. They have smaller paintings of Swami’s Encinitas scenes, like the Buddha sitting cross-legged on the cliff above Swami’s break.

“He’s the same guy who painted our Encinitas murals,” says Jennifer as she sets down my breakfast.

Gotta say, there’s something about breakfast for dinner that makes it twice as delicious. I put pepper on two poached eggs sitting on top of a pile of potatoes, jalapeños, tomatoes, onions, and green bell pepper slices. There’s that dark mass of ground pork underneath. All dee-lish.

I pour the little plastic pot of red salsa over all of it to make the potatoes more interesting. But, oh man, this…is…chorizo. It’s like finding a menudo that really works on your hangover. Definitely one of the better chorizos I’ve had. The kicker is white feta cheese, which gets a tart little thing going and adds flavor to the jalapeño heat.

“About 40 percent of our customers are vegetarian or just interested in healthy foods, like spirulina or fruit and veggie smoothies,” says Arnoldo, the manager. “But you should see us on weekend mornings. The line goes out into the street.”

It didn’t start off like that. They opened three years ago, and in the first three months business was lousy. But it didn’t take long to figure out the problem.

“We had to drop our prices by about $2 per plate,” Arnoldo says. “It worked. Now we’re starting to make up in volume what we’ve lost in tighter margins.”

As I’m leaving, that Leslie Gore tune is back in my head. You don’t own me…

Right now, though, this late-night breakfast joint does.