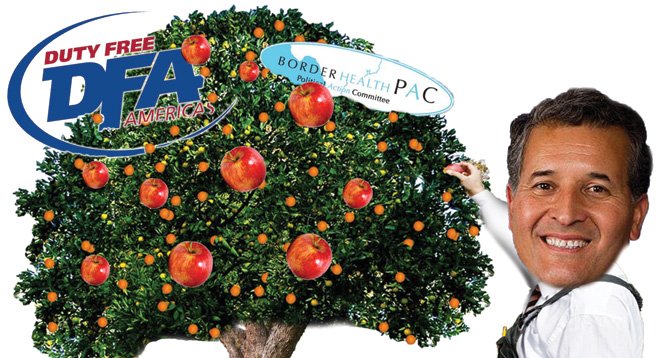 When Democrat Bob Filner was a congressman, he could always count on plenty of campaign cash from the Falics, a well-heeled Florida family who own a string of duty-free shops along the U.S.-Mexico border all the way from the Gulf of Mexico to San Diego. Come campaign season and even in between, Jerome, Leon, and Simon Falic, the three brothers behind Duty Free Americas, regularly anted up for the Filner cause; in 2010, they were his biggest donors, producing $16,800, according to the website OpenSecrets.org. And a company of theirs gave $10,000 to an independent Filner for mayor committee. (The brothers also put up $12,000 last year so GOP then-mayor Jerry Sanders could put on a grandiose “border summit” featuring Obama ex–border czar Alan Bersin.) However, all that was yesterday. Filner’s replacement congressman, also a Democrat, is Juan Vargas. The two often were at odds, and Vargas once unsuccessfully challenged the incumbent in the primary. But on June 16, the Falic trio each chipped in $2600 to the Vargas campaign war chest.

Another recent Vargas donor also has a Filner connection, though not as friendly. Aaron Feldman, who presides over Sunroad Enterprises, contributed $2100 on June 13, bringing his total pro-Vargas tally for the year to an even $3000. Sunroad, of course, was at the heart of the alleged pay-to-play Filner scandal that has since been largely eclipsed by the mayor’s purported sexual harassment peccadilloes.

In the category of out of town money, in April, the Border Health Federal PAC came up with $10,000 for Vargas. According to its website, “The Border Health Political Action Committee (BHPAC) was established in an effort to promote the issues of the medical profession along the border of the State of Texas. To that end, BHPAC will support the nomination and election of candidates to Texas state offices who seek, through responsible means, to further the mission, goals, and objectives of this profession.” According to a report by the Houston Chronicle, the committee is associated with Doctors Hospital at Renaissance in McAllen, Texas, which “has been fighting with the state and other hospitals about how federal payments for indigent care are distributed.” Texas Monthly has reported that a major donor to the PAC is wealthy real estate developer, healthcare facilities owner, and Hillary Clinton backer Alonzo Cantu of McAllen. “No longer just friendly to Democrats, the PAC gave generously to [Texas governor Rick] Perry in 2010 to ensure that the Valley would have a seat at the table with Dallas and Houston when important decisions are made concerning health care spending.”

These whores don't care who they give money too as long as it puts a string around their finger that they can pull when they need some juice. This system sucks so bad. Churchill was wrong.