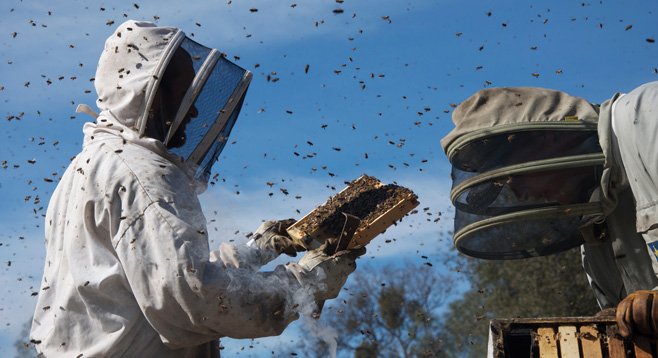 Everything you always wanted to know about honeybees but never thought to ask is answered in the sweet documentary More than Honey.

Who knew that one-third of what we eat would not exist without these plant-pollinating “messengers of love”? But across the globe, bees are rapidly and mysteriously dying off. Depending on what part of the world you call home, the extinction rate could be as high as 90 percent. Director Markus Imhoof (The Boat Is Full) set out to explore the phenomenon that’s become known as, “colony collapse disorder.”

A lumbering, Tyrolean-hatted figure, axe and ladder in hand, footslogs his way through a scenic Swiss mountainscape. Were it an American film, our slow-moving hulk would be in search of a teenager’s head to hatchet. But Fred Jaggi’s task is more horrifying than any Freddy Krueger nightmare. Without fear, or the aid of a protective head net, our Freddy takes out a nest of bees with one pendulant swipe of the blade.

For people like Jaggi and Imhoof (both men’s families have kept honeybees for generations) beekeeping is an honored way of life. Imhoof traverses the planet speaking with scientists, apiarists, and businessmen. The first words out of the mouth of industrial beekeeper John Miller as he pulls his 4x4 into Newcastle, California’s Miller Honey Farms are, “Do you hear that? It’s the sound of money.”

Imhoof also touches on the lighter side of apiculture by visiting a woman who runs a mail-order Queen Bee business. Sales would undoubtedly skyrocket were she to auction off drones on eBay. 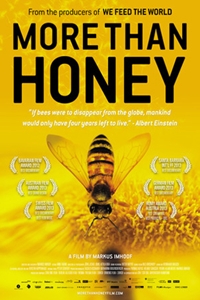 The delicate, macroscopic eavesdropping into the care and handling of domesticated bees cries out for IMAX. Instead of the bland, formless science-and-nature doc likely to be projected on any domed IMAX screen in the land, More than Honey is abuzz with stories to tell. Even the narration — if not the overall tone of the piece — adds a hint of Herzog.

The film eventually begins to ramble. Rather than carefully cobbling together the various personalities and their stories, Imhoof trips up viewers by fracturing the narrative with his willy-nilly insertion of random swatches of hive-talk. And the intrusive computer-generated bees cheat the viewer by serving as a reminder of how truly awful Bee Movie was.

What I don't get is how the planet is seeing a dying off of bees and yet, when you read a book like "Cooked" by Michael Pollen, he writes about the thousands of new bee hives being established and maintained by urban beekeepers on rooftops and fire escapes as part of the whole food movement in quite a few major cities. It seems one story flies in the face of the other. Where bee the truth?

"Where bee the truth?" Good one!

I'm not familiar with a book on bees by a guy name Pollen. There is a terrifying quote in the film from Albert Einstein: “If the bee disappeared off the face of the earth, man would only have four years left to live.” Not sure, but if I had to guess, the amount of honey produced by a few thousand homegrown hives can't put a dent in the amount needed to survive.

Recently a swarm of bees came into my backyard. There were literally thousands. I didn't count them but the sky/air of a sizable space was dense with tiny buzzers. I was inside at the time and so were my dogs but it scared the crap out of me! Truly Hitchcock, they lazily made their way across the back. I thought of the Africanized killer bees that have bred with those sweet little bees and imagined if they kept going and swarmed an unsuspecting sun-bather, they were in deaths path. I have heard of several people being killed that way. They found a hole in my pepper tree and formed a real living bee line, as they all entered in. Same tree I had Pest Patrol, bug company, poison another nest last year, brought him back the next day and did it again. He puts on his bee keeper - or killer- suit and gets on a ladder to reach the hole, while new bees are setting up house, drops a poison pellet down in there. They get a bit agitated for a couple of hours but then it quiets down and we can go out to the garden again. Sorry but not in my backyard.

Something similar happened to 2 friends, both of whom live in University City. The more enterprising of the two found a local beekeeper to come out to the house and remove them for free! Me? I was never raised to fear bees. Maybe that's why I have never been stung by one.