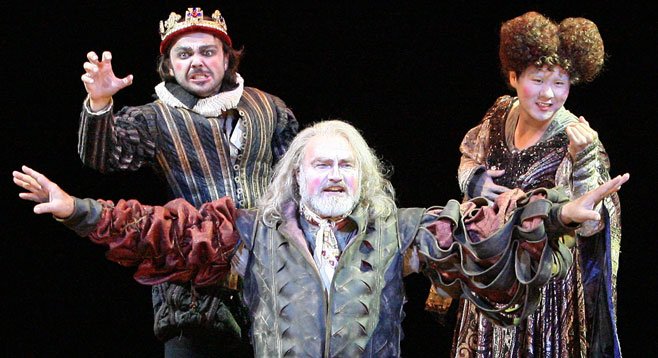 The Old Globe Theatre’s Rosencrantz and Guildenstern Are Dead is probably as good a production as Tom Stoppard’s play will ever see. The reason: director Adrian Noble knows the text to its inches. He has a flair for its theatricality and has encouraged excellent performances from the leads. Jay Whittaker (Guildenstern) and John Lavelle (Rosencrantz) are, often at the same time, a comedy tandem à la Laurel and Hardy, Samuel Beckett’s stranded clowns in Waiting for Godot, ramshackle philosophers — oh, and minor figures in Shakespeare’s Hamlet.

R and G were Hamlet’s schoolmates before he went to college at Wittenberg. King Claudius sent for them to hang out with the Dane, study him, and find the cause of his “transformation.” Is he mad — or just faking? The king wants secret agents. Although some stagings make them treacherous, the text doesn’t tilt one way or the other. And in Stoppard’s version, they have nary a clue.

Stoppard said R and G’s “about two people at Elsinore — and not about the generalizations you might drag out of it.” Fine, but just where are they in Elsinore? Simple location is tricky. Like Hamlet’s father’s ghost, they only exist between the footlights and the proscenium. In any “real world” sense, they’re “dead.”

In the “actor’s nightmare,” you’re on a stage, but with amnesia: you don’t know the play, your lines, or the blocking, and the audience is a restless, seething behemoth, ready to pounce on your next speech.

Rosencrantz and Guildenstern are the reverse: the “character’s nightmare”? When doing a scene in the play, they’re fine. They talk to Hamlet or King Claudius and fit right in. But offstage, they know nothing, not even whose name is whose. Sometimes actors only use “sides,” just their lines and accompanying cues, not the whole play. All R and G know are their “sides.”

Otherwise, they’re outside of time and probability, since a coin comes up heads 92 straight times (but where did they get the coins?). Their lives are mere fragments and “incidents.” In Act Three, Guildenstern says, “give us this day, our daily cue.” As we watch them, Shakespeare’s tragedy unfolds behind the scenes, like a play within the play. And R and G become as perplexed, in their own way, as the Prince of Denmark.

One of director Noble’s most striking touches: a small TV crew is filming the play — Hamlet: The Miniseries? A single camera, bright lights, and a fuzzy, wind-muffed boom mike shadow the performers. Hamlet (a hyper-agitated Lucas Hall) and King Claudius (a blaring Triney Sandoval) stick their faces right into the lens. The acting’s so vein-bulging, you shudder to think how the movie will turn out.

Rosencrantz and Guildenstern play downstage. Compared to Noble’s comic tragedy behind them, their dilemma becomes tragi-comical. At one point they see Hamlet mumbling to himself. He’s actually doing the “To be or not to be” soliloquy. R and G do one, too. In fact, along with an always engaging, entertaining surface, much of the play is an extended riff on being, not being, and their being stuck in-between the two.

Stoppard puts the Player and his acting troupe into a similar state. Since children’s companies are all the rage these days (a gripe Shakespeare includes in Hamlet), these frayed souls will do anything for a guilder, poor Alfred (a harried Stephen Hu) most of all. Their costumes, at least a decade old, look allergic to soap, thanks to Deirdre Clancy’s top-notch designs. And their leader, the wonderfully stagey Sherman Howard, is funny and so wise it’s as if he’s already read the play. “Life is a gamble, at terrible odds,” he says, “if it was a bet, you wouldn’t take it.”

He also tells R and G that uncertainty is the way things are and that they’re “nobody special.”

Now just hold on there, Mr. Player! This may be the case in classical tragedy, where hubris humbles and kings fall, but not in Stoppard’s. He makes the partial lives of alleged nobodies matter. They may be merely the “common man,” but they raise the same questions as the melancholy Dane — albeit in prose, not iambic pentameter — and speak not for the two percent but for everyone else.

Jay Whittaker makes Guildenstern the frustrated man of reason. He craves order and wants the drama of his life divided into acts and scenes. If onstage alone, Whittaker’s at times strident deliveries would be shrill. But when combined with John Lavelle’s amazing Rosencrantz, the tandem is unbeatable.

Marshmallow-soft, split-second precise, and a veritable calliope of squeaks and spouts, Lavelle’s a delight throughout. Much of the play resembles a coin spinning in the air — comedy/tragedy/comedy. Even one of Rosencrantz’s defining lines won’t hold still. In Act Three he confesses, “I can’t think of anything original. I’m only good in support.” By the time Lavelle utters the words, they evoke their opposite: if Rosencrantz is just a “second banana,” he must be one of the funniest “straight men” in the theater!

There’s a play-outside-the-play at the Lowell Davies outdoor stage: a tragedy at that. For the past four years, Adrian Noble has helmed the Old Globe’s Summer Shakespeare Festival. He has done consistently spectacular work. For reasons unexplained — wasn’t his contract for five years? — Rosencrantz and Guildenstern is his last official show. [not true: I have since learned that Noble chose to move on after four years. I hope he comes back in the future; his work's been so outstanding]. ■

Rosencrantz and Guildenstern Are Dead, by Tom Stoppard