This Central Valley community recalls the days of Steinbeck. 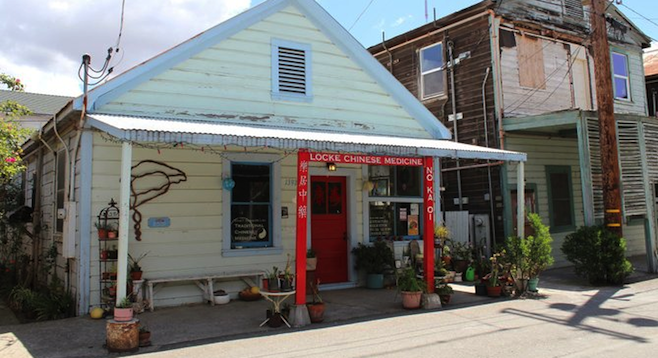 The houses slant sideways and the opium dens are gone, but Locke, California, takes visitors back more than 90 years to a unique Chinese farming community. Thanks to the work of a few locals with a passion for history, the entire main street has been preserved and many stores and restaurants still operate.

Locke was established in 1915 when Chinese immigrants settled here. A permanent population of 600 lived alongside another 1,000 seasonal farm laborers who provided the Sacramento Delta with a major work force, helping to grow onions, potatoes and asparagus. They also tended the fruit orchards. When they couldn't find farm work, they found employment at canneries and packing houses.

Families lived above their businesses, and children went to public school in nearby Walnut Grove. After regular school ended, children attended the Chinese School. Busts of Confucius and Sun Yat-sen still stand outside the school and desks are lined in rows inside.

A commemoration sits in the middle of the main street at the Locke Memorial Park and Monument. It pays tribute to Chinese immigrants who first came to California in search of gold, later becoming builders of the Sacramento Delta levees and the transcontinental railroads as well as developers of agriculture in the Central Valley.

Locke thrived for a time and had food markets, restaurants, dry goods stores, an opera house, a church and post office. The town also was well known for its five gambling houses, five brothels, speakeasies during Prohibition days – and even opium dens.

Along the main street you can still visit Dai Loy Gambling Hall owned by Lee Bing from 1915 to 1950. (Today the establishment is a museum of gambling paraphernalia.) Lee Bing also ran the Fat Moon Company and sold dry goods, hardware and herbal medicines.

Al the Wop's Saloon and Restaurant once operated a brothel; now you can eat a traditional American steak sandwich there. You can also pass by the Star Theater, which had a Chinese opera, gambling den and brothel, as well as the Lockeport Hotel, one of the first buildings in the town.

Walking past these businesses, you'll end at the Locke Garden Restaurant where you can enjoy lunch or dinner. This was Locke's first saloon and gambling hall.

By the 1940s, the children of these Chinese immigrants had moved away. Although streets are marked in both English and Chinese, out of about 60 locals only 10 are of Chinese descent. Still, the Locke Foundation continues to preserve the town’s history for visitors to enjoy.

Hi, Thanks for your article on Locke, California. The Confucious and Sun-Yet-Sen statues were installed by Clarence Chu in May 2011. The town of Lockeport (before the name was shortened to Locke) dates back to the late 1800's and was founded by George W. Locke, who was born in New Hampshire of English ancestry and came to California during the Gold Rush in 1952 at the age of 22. The 1930 US Census accounts for 410 residents of Locke, California from 20 different countries of origin around the world, most of whom worked at the railyard and fruit cannery on the river in Locke. Fewer than 100 of the 400 Locke residents in 1930 were born in China. Locke was a multi-cultural town at that time and still is today. Population in 2013 is about 60 residents of whom two were born in China. The LMA Locke Management Association 13 member Board of Directors stated in a March 2011 letter to an attorney that their "responsibility includes notifying 400 Chinese descendants due to their own priority to purchase Locke real estate property." The board filed a lawsuit against me (I'm not-Chinese) for purchasing one of the 50 properties in the town. We go to Superior Court in September 2013. Google search on " California Locke dispute " for more. Thank you for allowing me to reply. M.Esch

Didn't Huell Howser do a profile on this town??????

And @M_Esch: Thanks so much for that extra information!