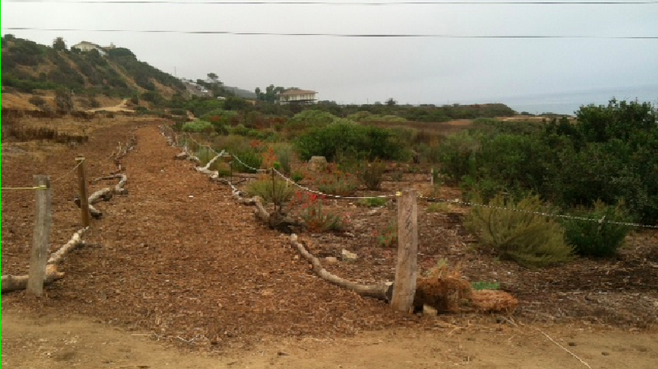 The mayor, the San Diego City Park and Rec. Department, along with San Diego police, the Sunset Cliffs Natural Park Rec. Council, and park users and neighbors have come together to address park safety and regulation infractions in the Hillside section of the park.

Below the Ladera Street parking lot, which is closed to public use at night, the former "Dixon estates" had become a gathering place for people to party while hiding out. Over the years, fires had been started inside the structures, and drug paraphernalia and alcohol bottles and cans had been found there on a continual basis.

After the mayor recently toured the area with rec. council members and heard their concerns, an emergency permit was issued to facilitate removal of the structures ahead of schedule. All the buildings south of Ladera Street are slated to be removed and the area restored to native coastal bluff habitat in an effort to reduce erosion from uphill runoff. The Hillside Improvement Project will soon be implemented.

Community members are poring over the city’s 100% Project plans to make final comments to them. Trails, erosion, runoff, and intertidal water quality are the main issues in the plan.

The improvement project also calls for restoring 22 acres (or about one half of the area) of the Hillside section of the park. Rec. council volunteers have already restored two acres just south of the Ladera parking lot and they have plans to move uphill to the proposed multi-use trail. The native-plant garden is considered an exemplary use of native vegetation to control runoff and stop erosion.

Last week, a work crew cut back the brush from the ravines just west of Point Loma Nazarene University's Young Hall parking lot. The area had become a gathering spot for illegal activities because of its proximity to the parking lot and the brush around it hid anyone from view; that is no longer the case. The view to the ocean is now completely open and the trees have either been removed or cut and placed into the ravines as a method of erosion control and to keep people out of them.

Police ask that citizens call in any illegal activities they observe in the park so that the situation can be dealt with and manpower needs can be assessed.

Thank you for this informative article about a truly natural park in the heart of Point Loma. For those of you who don't know where it is: Go through Ocean Beach on Sunset Cliffs Blvd to the very end, make the left turn on Ladera, and the Park entrance looks like a time-travel doorway to San Diego back-country. If you have not been there, I promise you will be amazed.

Finally an accurate article on Sunset Cliffs natural park-Thanks to Jimi Olsen for his fine reporting. Our Kudos to Mayor Filner and Park and Rec. for their outstanding work on the demolition of the Dixon Estates. - Thanks for the countless volunteer hours of our group to help the park, and the SDPD efforts to enforce the problems encountered there. 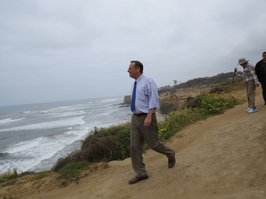