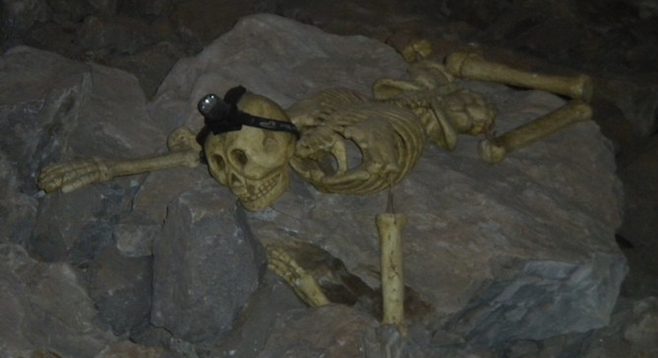 After leaving the surreal and creepy ghost town of Chloride, AZ, we stopped for an obligatory chocolate malt at one of the many charming diners on Route 66 and considered the time.

With five hours to spare before hitting the Grand Canyon for sunset, we decided to take a gamble and swing by the gaudily advertised Grand Canyon Caverns, just east of Peach Springs. Despite the name, the only affiliation between the caverns and the national park is that they connect underground and share the same air. At a not-insignificant $16 a head for the tour, we half-expected it to be a serious rip-off and time sink.

Thankfully, it was actually a lot of fun.

After handing over the notes, our offbeat guide took us down a rickety elevator into the largest dry caverns in the U.S. Dry caverns are effectively dead caverns: no running water, no new rock formations and no forms of life. Frozen in time.

They are also fearsomely eerie places, with mummified bobcats and missing hikers (possibly) and the skeletal remains of a giant sloth (Gertie, they named her) that slipped into the network of caves several million years ago. You can still see scratch marks on the wall where the poor sloth tried to claw her way out.

The guide’s monologue was more amusing than the usual patter; she was refreshingly deadpan, joking in equal measure about the fake skeleton models and the quality of the air and the questionable integrity of the money-spinning prospector who first discovered the caverns and their lucrative potential. Clearly a woman who loved the informative side of her job as much as scaring the kids.

The man who discovered the caverns, Mr. Walter Peck, fell into a hole in the 1920s. After some ramshackle exploration with ropes and torches, he was convinced that he had found a vein of gold and proceeded to sink his finances into purchasing the "gold mine." After discovering his rookie mistake (rust apparently looks a lot like gold), he decided to think outside the box and charge people to come and look at his cavern instead, lowering them down into the darkness by a precarious length of rope. Hard to imagine, but apparently the rickety staircase he built for later tourists was far more terrifying. 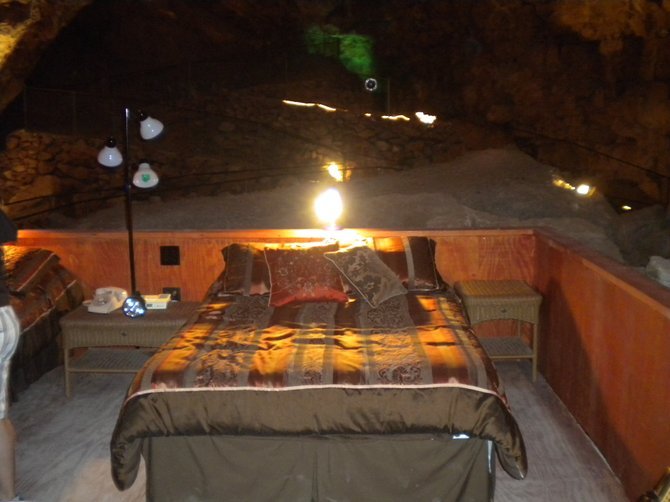 As we worked our careful way along the underground rocky paths, a strange sight opened up in the football-field-sized main cavern. For only $700 a night, you can stay in the glamourous "Caverns Suite" built into the center of the cavern, complete with TV, bathroom and shower, complimentary candy but no lights, no staff, no sounds – just you and the ghost of the prospector who still haunts the darkest corners. It doesn’t get more romantic than that.

Apparently, the comedian Billy Connolly once spent the night here. (Another well-loved British eccentric in these parts. We get everywhere).

Interestingly, the caverns also have a more recent history. They were appointed as a fallout shelter in 1962 for the presumed upcoming nuclear holocaust, and, surprisingly, one of the caves is still stacked with enough emergency rations to keep 2,000 people alive for several weeks. 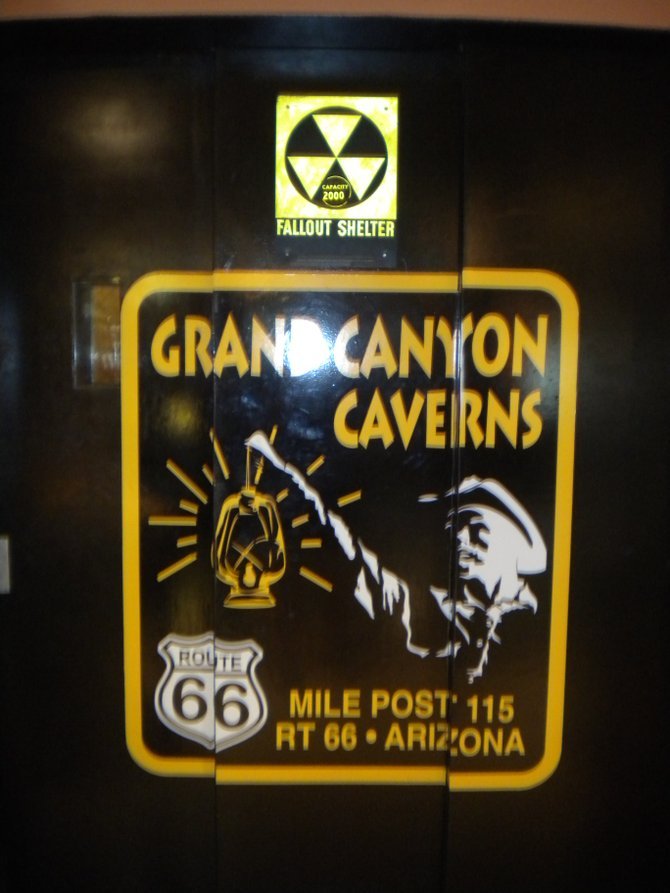 The fallout shelter you can trust.

Our guide proudly showed us the gallon drums of water and scrappy boxes of barely-edible rations, the portable toilets and emergency blankets that would become home should the unthinkable happen. To be honest, if faced with the prospect of two weeks eating nothing but fifty-year old carbohydrate-substitute crackers and rancid candy, I’d take my chances with the radioactive zombies up top.

(I would like to add that I hadn’t expected this particular detour to be quite so apocalyptic. Sometimes the world’s end just follows me around).

The tour took about an hour, but we could have spent much longer chatting to the guide about her beloved caverns. Sure, it isn’t a national park complete with breathtaking views and the protection of government funding, but it’s a fun stop off on an otherwise achy and monotonous journey to the edge of the world.

And who knows, if this world keeps getting crazy we might need the caverns for more than just a cheap thrill – so probably best to mark them on the map while you can.