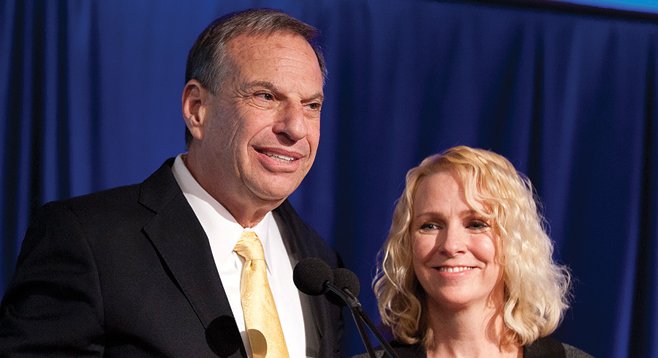 Last week, new Democratic mayor Bob Filner gave his first State of the City Speech. Before he took the microphone at the Balboa Theatre, the mayor was preceded by Nathan Fletcher, former GOP assemblyman-turned-independent who came in third to Filner and Republican city councilman Carl DeMaio in last year’s mayoral primary. Fletcher told the audience of his admiration for Filner, saying, “We didn’t agree on every issue, but we grew to respect one another for having a sincere commitment to public service and a sincere commitment to our city. I grew to appreciate Bob’s lifetime of service to our country, to civil rights, to veterans, and now to the city of San Diego.”

Fletcher went on to say the city was full of “so many bright, committed people,” including, he continued, “San Diego’s first lady, Bronwyn Ingram.” The title struck one local blogger as inappropriate, given that Ingram, the twice-divorced Filner’s longtime girlfriend, has yet to marry the 70-year-old mayor. Fletcher and his wife Mindy, an ex-aide to president George W. Bush, have socialized frequently with Filner and Ingram, according to accounts on Twitter and elsewhere.

Unmentioned during the State of the City ceremonies was the new job that Fletcher has taken as a senior director of “corporate development” for cell-phone giant Qualcomm. CEO Paul Jacobs was one of the masterminds and chief financiers of the ex-assemblyman’s mayoral bid. Fletcher is not registered with the city as a lobbyist for the firm, but besides making various public appearances with Filner, the former GOP advance man has of late been touting Qualcomm’s job creation and other good works.

According to the company’s latest lobbyist disclosure filing, posted online by the city clerk’s office and dated January 15, Qualcomm’s senior vice president of government affairs, William Bold, has stopped by city hall to lobby Julie Dubick, chief of staff to then-mayor Jerry Sanders, about the company’s “campus expansion” plans. In addition to Bold, ten other Qualcomm employees are registered as lobbyists with the city. Besides the campus expansion, issues of interest to Qualcomm are listed as “City Budget”; “San Diego Wastewater Reduction Ordinance”; and “Incentives for Corporate Relocation and Expansion.”

The evening filner showed up to the Sweetwater union high school district board meeting and referred to pearl quinones as his queen to which she smiled back with a king remark it made the majority of the audience nauseous. Quinones, you know the INDICTED SCHOOL BOARD MEMBER. As I have stated before if he is the best we can do for a king and she the queen - GOD HELP THE KINGDOM!!!!!!!!

Filners reputation has been damaged greatly by this relationship!!!!!!!!

Relax, anniej, if you'da been in politics in San Diego and South Bay as long as Bob Filner has, you'd be friends with a lot of people who were indicted or imprisoned or now on parole or presently free as birds, having paid their debt to society.

So, what you are saying is that Filner is as dirty as the rest of those board members and former supes who are under indictment. He sees nothing really wrong with their activities? Sorry, but I'm with anniej on this one.