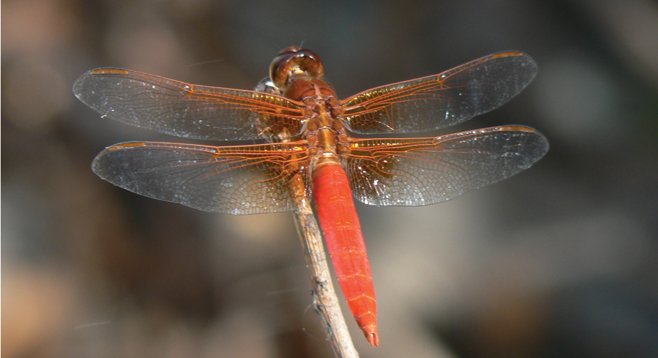 Lake Murray, at the southern end of Mission Trails Regional Park, is a great place to enjoy chaparral and coastal sage scrub with its easy access path along the lakeshore. It is also a great place to think about water and its role in the county’s history.

Water was key to the growth of San Diego County. In 1850, the county consisted of land east and south of Los Angeles, with major portions of what is now Inyo, San Bernardino, Riverside, and, until 1907, Imperial County. Prior to California statehood, an estimated 2000 to 5000 people resided in this large area. The population grew in relationship with the larger manmade water-resource facilities built from 1888 through 1897, including the Sweetwater Dam and the Lower Otay Dam. San Diego County’s population was just under 35,100 people in 1900, according to the census. 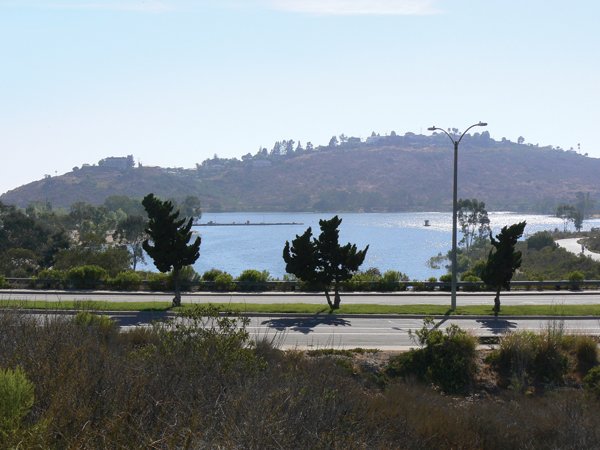 La Mesa’s Lake Murray offers a great place to take a walk amid chaparral and coastal sage scrub while pondering the role of imported water in San Diego’s history.

Prior to the Lake Murray Dam, there was a project by the San Diego Flume Company that completed the La Mesa Dam in 1895. Water was diverted from the San Diego River via a canal, and then, by an innovative process, was pumped with silt to the dam site for a pond, creating a compacted core by allowing the water to seep into the ground. The upstream side was strengthened by two layers of wood planks that were caulked and swabbed with asphalt, thus having “controlled” leakage estimated to be 100,000 gallons per day.

The major 20th Century projects, supporting the post WWII population growth of just over 550,000 in 1950, started with Lake Murray’s hollow gravity multi-arch dam. Completed in 1918, it was built downstream of the La Mesa Dam for the cost of $1.21 million. This was followed by replacements for Lower Otay and Barrett, earthquake-safety improvement for Henshaw, and new dams built at El Capitan, Hodges, San Vicente, Loveland, and Sutherland.

Bring your binoculars and cameras, as the wind currents along the edge of the lake allow great viewing of turkey vultures and hawks as they hover. Near the softball fields is an osprey nest, easily found by the guano spray on the road. Cormorants, ducks, sparrows, and wren-tits are among the greater than 140 species of birds sighted at the lake or among the coastal sage plants. California sagebrush (Artemisia californica, not a true sage), flat-top buckwheat (Eriogonum fasciculatum), black sage (Salvia melifera), and deerweed (Lotus scoparius) are among the indicator plants for this endangered habitat. 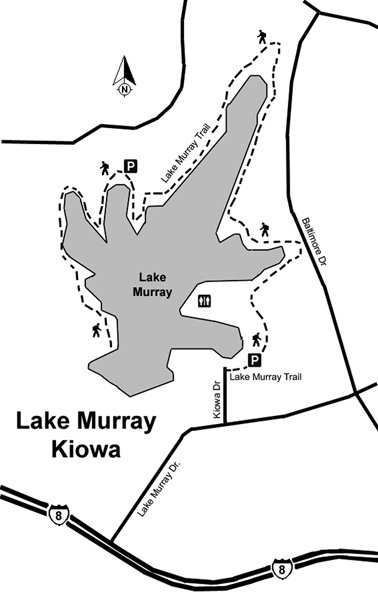 Lake Murray Reservoir, with its multiple-tiered inlet-outlet tower that allows the flexibility to choose the layer with the best temperature and water quality to enter the filtration system, is at the southern end of Mission Trails Regional Park, one of the largest urban parks in the country. Park usage information can be found at mtrp.org/lake_murray.asp

Hiking length: 6.4 miles to dam and back. Please keep a “passing lane” available for the multi-purpose use of hikers, runners, and bicyclists. There is shore-fishing, plus private boats are allowed as the water level allows. Dogs on a leash permitted.

Difficulty: Easy, with little elevation gain/loss on paved surface of the perimeter road.