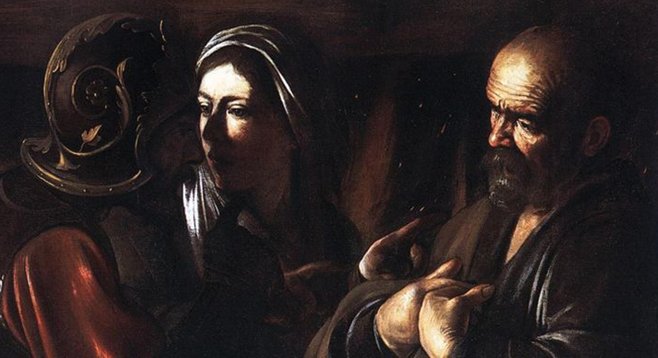 In his 20s, in Rome, in the first decade of the 17th Century, Caravaggio — born Michelangelo Merisi in the Lombard town of Caravaggio — was already so innovative a painter that some of his contemporaries began to borrow his manner of exaggerating flesh by casting on it a single source of light and allowing other pictorial elements to creep and seethe and emanate from a cellar darkness, though none of the painters called “Caravaggisti” had his gift of making flashy technique so stunningly immediate an expression of physical pain, moral anguish, and carnal delight. Twenty years after his death in 1610 at age 38, Caravaggio’s innovations had become a sharable idiom that extended to France, the Netherlands, and Spain.

The 21-year-old Caravaggio arrived in Rome in 1592, when the Counter Reformation Church was encouraging a naturalistic art that emphasized the human-ness in Old and New Testament events and the lives of the saints. It wanted art to answer, with an intensified realism, to the human passions narrated in sacred story. This was consonant with Caravaggio’s genius for dramatizing threshold experiences — conversion, summoning, transport. In his 1595 Saint Francis of Assisi in Ecstasy, only Francis’s heart wound is visible. More interesting to Caravaggio is how the saint’s entire body responds with spastic transport to this extraordinary act of divine selection. One hand is cramped shut, the other hangs uselessly at Francis’s side; one eye is closed, the other partly open. He’s in a fugue state.

Caravaggio’s arrival in Rome also coincided with the increase in affluent private collectors, and he was quick to acquire important clients. Compared to his more agitated compositions, his portrait of Maffeo Barberini, a wealthy Florentine who went on to become an archbishop and then Pope Urban VIII, is pictorially sedated: seated in an armchair, pen in hand, the archbishop presents to us an authority that’s humane, studious, ironical.

One result of the Church’s emphasis on naturalism was that artists were more likely to express the subjectivity of emotional turbulence or physical violence. Caravaggio had acute instincts for how the body expresses extremity of feeling. In his best known religious images, such as those in Santa Maria del Popolo — Saul blinded and thrown from his horse on his way to Damascus; St. Peter being crucified upside down — the body is a bearer and register of terror, jumpy with religious meaning. And Caravaggio was free to showcase personality and eccentricity. His St. John the Baptist is a slightly petulant teenager whose inarticulate discontent looks just this side of adult righteousness, and the light that wedges down from offstage, carving the Baptist’s features out of an arboreal darkness, looks like a bestowal of responsibility.

All these pictures (except those in Santa Maria del Popolo, which never travel) are among the eight Caravaggio canvases included in Caravaggio and His Legacy, a world-class exhibition at the Los Angeles County Museum of Art that documents what the catalog calls “the Caravaggio effect” among the painter’s contemporaries and others who were, however indirectly, beneficiaries of his practice. The Caravaggio pictures show how he loved scenes of confrontation — of accusation, appeal, disclosure — and how he made of biblical scenes an ardent pictorial moment, not something taken out of time but an extension of real time and space. His theatricality created a believable and often uneasy intimacy among souls and gave an embodied momentum to the dynamics of expectation and deliverance.

One of the great confrontation scenes in literature is Peter’s denial of Christ. Caravaggio’s execution crafts a complicated drama. The serving woman who challenges Peter points at him while denouncing him to a soldier whose presence is mostly delineated by the light burnishing his helmet and armor. Peter, in a gesture anybody who has been to Italy will recognize, clutches his hands to his chest and cocks his big, ruddy, rough peasant’s head. The two auxiliary figures are only partially illuminated — the woman’s suspicious, accusatory eyes are weirdly masked by light — but Peter is a guilty thing surprised: his defensiveness is compounded of duplicity, trepidation, and shame. 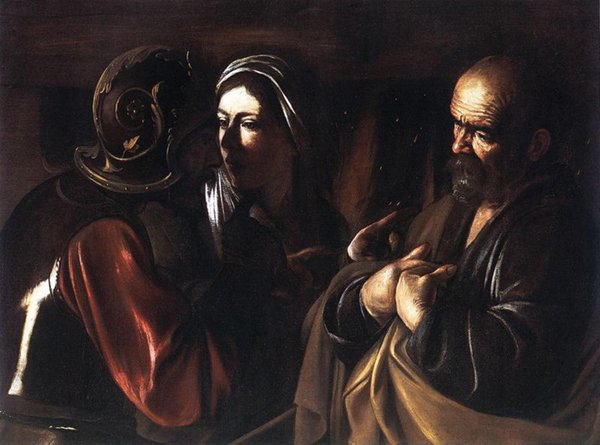 Caravaggio and His Legacy is, among other things, a scholarly probe. It displays treatments by other artists of scenes and themes Caravaggio depicted. It sets his Denial, for instance, in relation to two other renderings, one by Nicolas Tournier made in 1630, another by a mysterious painter called Pensionante del Saraceni (because he was somehow associated with a Caravaggista named Carlo Saraceni). In Pensionante’s version, Peter’s denial is a mild-mannered “who me?”; the painting’s urgency comes entirely from the maidservant’s angry, astonished facial expression and beseeching hands. In Tournier’s treatment, our attention is pulled away from the act of Peter’s denial to a self-contained genre scene of boisterous bravos engrossed in a dice game. The painting associates a moral choice predicted ineluctably by divinity with a game of worldly chance. While a critical event in Christian narrative takes place, real life not only still goes on, but, in this instance, steals the show.

One of Caravaggio’s Roman contemporaries, Orazio Gentileschi (father to Artemisia Gentileschi, his daughter and a better painter) learned how to craft Caravaggio’s extreme contrasts, but his pictures illustrate how one can develop superb technical proficiency and still lack everything else. Consider two decapitations. In Caravaggio’s version of the Judith story (not in the exhibition: find it in the Barberini collection in Rome), Judith shows an aloofly superior disdain for Holofernes, whose head she’s in the process of slicing off. In Gentileschi’s treatment, Judith and her maidservant hold the king’s severed head in a basket. Each looks up and away into the cellar light. The painterly energy in the Caravaggio is ferocious compared to Gentileschi’s stately, demure, “holding the pose” tableau.

Strong artists take what they need from predecessors without becoming stylistic hostages to them. It helps to be a generation or two removed. The exhibition demonstrates not only how Caravaggio’s example was closely imitated in pictures by contemporaries like Gentileschi and Bartolomeo Manfredi but also how qualities he released into European painting eddied out down the decades and were fully absorbed and modulated by French painters, such as Simon Vouet and Georges de la Tour (who domesticated Caravaggio’s chiaroscuro and transformed cellar light to glowing-core illumination), and the Dutchmen Gerrit van Honthorst and Gerard Seghers.

Manfredi (1582–1622) mastered Caravaggio’s way of depicting faces in varying states of terror, confusion, and anger and could orchestrate multiple figures in scenes that have Caravaggio’s paused velocity of action. The best of these is Christ Expelling the Merchants from the Temple, which pulls our attention in different directions. Most of the commotion is deposited on the right, where the merchants are reacting with consternation to Christ’s anger. Their action draws us to its source: flailing a whip, Christ looks inflamed, a man to be feared. The marvelous moment, however, belongs to the serving woman whose back is turned to the action: balancing a workaday bundle on her head, she’s indifferent to the violence occurring right there behind her back. Manfredi was himself so influential that his way of painting, the Manfrediana Methodus, was applied to compositions inspired by his powerful example, especially the work of French painters such as Tournier (of the Denial picture) and Vouet, whose version of Saint Jerome at his writing desk being visited by the angel of death catches the saint with a hand raised in a gesture of both abandon and protest while the other hand is still writing.

This kind of big-tent show frees the curators to arrange smart match-ups — three “Denials” and two “Crown of Thorns” hang side by side in the same gallery — and to bring together masterpieces fairly remote from Caravaggio and his Rome. Jusepe de Ribera (1591–1652), a painter of ripe, juicy agonies, was born in Valencia but lived his adult life mostly in Naples. His Saint Mary of Egypt (a reformed prostitute who lived in penitence as a desert hermit) concentrates the withering effects of old age into a look of severe expectation of deliverance. Velázquez, who learned much from Ribera’s practice, gives us a St. Thomas not in Christ’s presence demanding to see His wounds, but alone, carrying a book and staff, like a hermit: his hands are clenched with skepticism, his peasant face stunned by uncertainty. The grandest picture in the exhibition, for me, is of Saint Serapion, a little-known martyr of the Mercedarian Order, by Velázquez’s contemporary, Francisco de Zurbarán. It’s heart-stoppingly vivid. Serapion’s arms are strung up. His head drops to his right shoulder with the massive weight of his death, and with it droops his right hand. Zurbarán paints the completedness of death with his characteristic grave and dignified composure. The rucked, weighty folds of Serapion’s rough woolen habit — it looks as if it’s been boiled in faint yellow-green dyes — hang heavy on the corpse and seem full of the faith the saint died for. ■