Getting more ink from a ballpoint pen 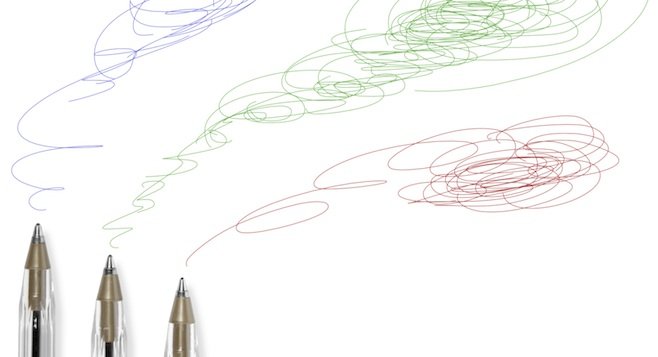 Here is one no one can answer: how to restart ink flowing in a ballpoint pen after non-use. This has everyone stumped, so if you can’t answer, that’s OK.

At the Alice Research Institute, nearly infinite knowledge is mine to command! And here I am answering questions about dried-up pens. It shows you something about where people’s priorities lie. At least I get to talk about ink a little bit.

The ink in ballpoint pens differs from printing ink in that the coloring agent is a dye rather than a pigment. Pigments are solid particles that are suspended in the “vehicle” (a transparent medium that keeps the otherwise dry pigment flowing), whereas dyes are liquid and soluble. Your ballpoint pen is filled with a pasty compound that’s about 50 percent dye; the rest being some kind of solvent and chemical stabilizers. It’s extra-thick because it would otherwise dribble out of the pen, but that viscosity is what makes it vulnerable to clogging up. It also contributes to the short-ish “shelf life” of a ballpoint pen. You see? There are concessions being made on both sides of this matter.

The long and short of it is that pens have about two years in them and then they’re liable to go permanently dry at any point. The jig is up. Toss it out and get a new one. If you think there’s a few more scribbles in there, but the usual methods of tapping and scraping the pen don’t work, try soaking the tip in a solvent such as acetone (nail-polish remover), isopropyl alcohol, or kerosene. If the culprit is some dried-up ink at the periphery of the ball, that should loosen it up.