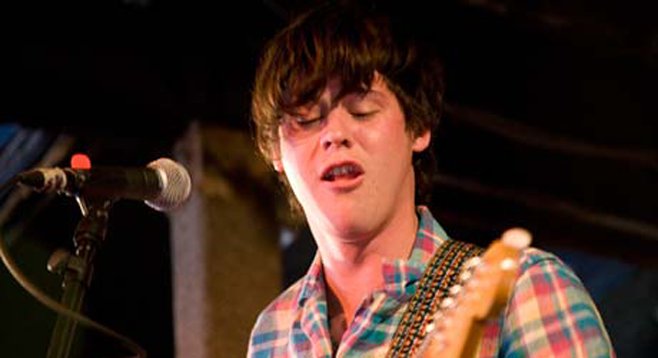 When the band formerly known as Short Eyes drops their Granado’s full-length on March 5 at the Belly Up, it’ll be the first show under their new name, North Beach, and one of their last shows with bassist Chris Richardson. “Chris is pursuing his dream of doing sound engineering at a college in L.A.,” says frontman Sean Sanders. “He’ll be playing the next few dates, so be sure to give him a kiss.”

A new record from I Wish I, Convolutions, comes out digitally via Dim Mak Records on March 12. “This is our first release since 1997,” notes drummer Gabe Gamboa. “We went on hiatus since then, only playing a handful of shows between 1998 and 2012. The new album is all four original players in the band. Dim Mak was the second label that we were signed to, and when we had the opportunity to re-sign, we did.” A video for lead single “Ideoglossia” is streaming online.

Heavy Hawaii’s Goosebumps album (Art Fag Recordings) drops March 18 at the Casbah. “It’ll be a CD, vinyl, and digital release,” says Matt Bahamas. A free download of their new song, “Airborne Kawasaki,” is streaming online. “The title came from a Terminator 2 trading card, where the T1000 is bursting through a window three floors up,” says Bahamas.

The release party for the next Wavves record, Afraid of Heights, happens March 21 at the Casbah. Recorded with producer John Hill (Rihanna, Santigold), main Wavve Nathan Williams paid out-of-pocket for the sessions. “In doing so,” he says, “I had no one to answer to. We recorded the songs how and when we wanted, without anybody interfering, and that’s how it’s supposed to be.” A new song, “Demon to Lean On,” is streaming online, as is a new video for “Sail to the Sun.”

On March 29, Bar Pink hosts a release party for the Hills Like Elephants album Feral Flocks, due via Requiemme Records/BMG Chrysalis. “On The Endless Charade,” says bandleader Sean Davenport, “I was harping on the idea of past relationships, but I was also trying to move on. Feral Flocks is more about noticing the subtleties of life, but I’m not trying to be profound.... If I wouldn’t say it to you at a bar, I won’t say it lyrically.”