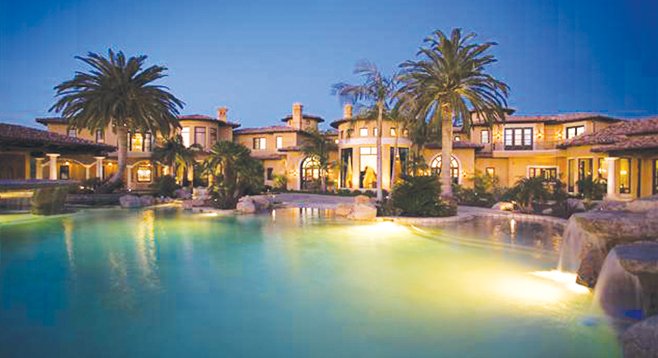 Casa Piena, the name given to the home at 14385 Cypress Point that means “full house” in Italian, sits on 4.5 acres in northern Poway, overlooking the Maderas Golf Club. The property’s four buildings include a 39-room main house with 9 bedrooms and 15 bathrooms, a 2-bedroom, 1-bath guest house, a separate pool cabana, and a detached three-car garage in addition to a second three-car garage attached to the main home. The total living area is 20,475 square feet.

Custom rooms in the house include a home theater in which “the centerpiece of the leather upholstered stage is an architectural salvage piece which was a mold used to create some of the columns for the buildings at the 1915 Panama-California Exposition in Balboa Park,” and an “ornate onyx casino with a stunning lit bar,” wine room, and a master suite that features dual bathrooms and walk-in closets, a spa shower, steam shower, sauna, and an exercise room.

You’ll find yourself “surrounded by authentic antiques and materials from around the globe,” throughout the home, according to the listing. “The estate’s extensive use of hand carved limestone, antique biblical stone, marble, precious stones, gleaming walnut doors, exotic hardwood cabinetry, luxurious wool carpets and a plethora of imported Italian lighting all contribute to the European sensibility.”

Outdoor entertainment is offered on 17,000 square feet of Bullseye Bermuda grass lawn advertised as “the same turf used on the baseball field at Petco Park,” a rose garden featuring cast-iron statues of maidens signifying the four seasons, on numerous patios and pavilions overlooking the valley, or on a private tennis court. A miniature ten-tree olive orchard is situated on the grounds as well. A 3000-square-foot custom-designed infinity pool (with spa, swimming river, rock slide, and hidden grotto reached by swimming under one of the two waterfalls) looks down on the fairways below.

“I have seen some pretty impressive properties in my career directing the construction of estate homes in San Diego, but the craftsmanship and attention to detail in the Casa Piena estate is unparalleled in any other property that I have had the opportunity to work on,” Ed Earl at Priority One Properties tells the Reader. Earl is acting as the listing agent on the property, and also served as the project manager during the estate’s five-year construction process that ended in 2009, which he says is his primary specialty. 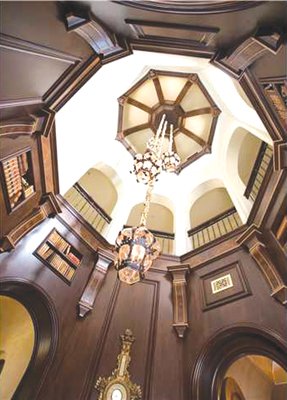 The owners spent several years selecting materials and adding custom touches to the home, but business needs have called them out of state. County tax rolls show the owner of record as Cary Katz, notable as the founder and CEO of San Diego–based College Loan Corp., the seventh-largest student-loan company in the nation, having funded over $19 billion in loans. The company came under fire in 2007, eventually paying $500,000 to settle allegations that it had given perks to college financial-aid officers in exchange for gaining “preferred lender” status. The company admitted no wrongdoing as a result of the settlement.

More recently, Katz has served as chairman of the nonprofit Stop Child Predators Partnership, a group dedicated to stricter punishment for those convicted of sex crimes against children and establishing a nationwide sex-offender database. Katz and his wife Jacqueline also gave $10,000 to the failed presidential bid of Michele Bachmann last year, accounting for nearly 10 percent of her total take in California.

The property is currently available for an asking price of $20 million, a bit more than the $18 million list price when it was briefly offered before being withdrawn from the market in 2009. ■

It makes me feel pretty bad when somebody else's pool is three times as big as my condo.

If it smells like crap, it's crap: County tax rolls show the owner of record as Cary Katz, notable as the founder and CEO of San Diego–based College Loan Corp.

Must be nice when the CEO of a student loan corporation can accumulate enough wealth and real estate that there's nothing left for the borrowers of the loans. 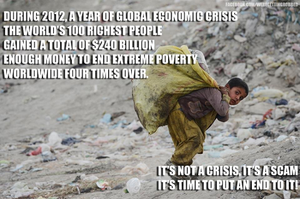 I'm sure if this kid borrows student loans, he'll realize a HUGE return. by Jill Ballard