More trails for Tijuana River Valley, but none to the mesas 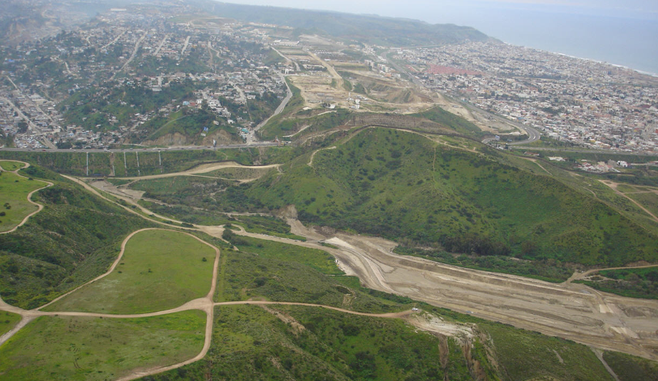 San Diego County supervisor Greg Cox and state assemblyman Ben Hueso celebrated a $1.5 million grant for added miles of horse and hiking trails in the Tijuana River Valley Regional Park on Friday, February 15. The funding will bring the total miles of trails to 22 in the park, but no money has been designated for trails on the three mesas at the south end of the park — two of which are part of the county park and the third (known locally as Bunker Hill) is jointly owned by the U.S. Department of Homeland Security and Border Field State Park.

"We are moving forward with all the trails except the uplands trails," said Sam Jenniches of the Coastal Conservancy. The three flat-top hills sprawl along the border (two are split with fencing between the U.S. and Mexico) for about four miles just east of the ocean. The highest, Bunker Hill, is named for a World War II bunkers installation at the very top, which gave the military a clear view along the border to the coast and out to sea.

To the east, across Goat Canyon, is Spooner's Mesa, named for Christopher and Olive Spooner, who ranched on top of the mesa. Part of their homestead and a concrete cistern with their names etched in the side remain atop the mesa, which has spectacular views of the river valley, the Silver Strand and Coronado, and the urban sprawl north to downtown San Diego.

Smuggler's Gulch separates Spooner's Mesa from the East Mesa, and the only established route between the mesas since the Border Patrol took the land in 2008 is an official U.S. government road that the public is not allowed to use. The equestrian association has been meeting with state parks, the U.S. Fish and Wildlife Service, and county parks officials to try to establish those connectors for the public. The Border Patrol is supposed to be involved but regularly skips meetings, according to a review of meeting minutes.

Meanwhile, the state parks has been closing trails on and around Bunker Hill, further limiting public access to the park.

Tijuana River Valley Equestrian Association president John Gabaldon welcomed the new trails, but said the group would like some focus on the upland trails.

"Our members applaud the perseverance and commitment of Greg Cox, Ben Hueso, and the Coastal Conservancy to build year-round trails for the public’s enjoyment of this wild riparian border area, though TRVEA does worry that as these trails become less primitive, then gentrified, the area will change away from the athletic way horses were meant to be ridden," Gabaldon said. "TRVEA is also encouraged by early discussions where the county might help restore trail links that once were used for connections between the three mesas in this area to their mesa-top trails and historic places —links destroyed by [the Department of Homeland Security] during construction of the border triple fence."