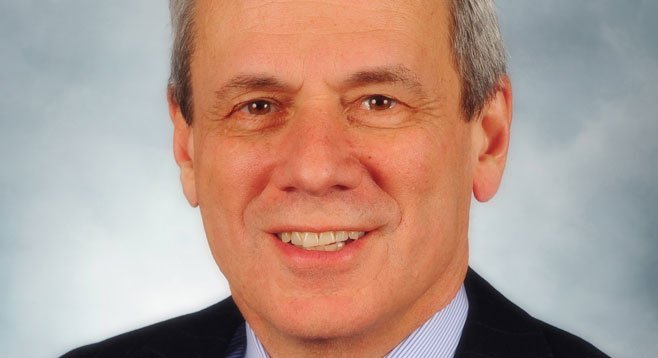 I have a folder on my internet browser’s bookmarks bar labeled “Sports Pages.” Inside are links to the sports section of every NFL and MLB team’s hometown newspaper. Occasionally, I’ll trawl through the tabloid briar to see if I can find column fodder in the underbrush.

It’s been awhile since my last tour, so this morning I clicked on the first link and found myself at jacksonville.com, the Florida Times-Union to you. As always, my first thought is, Why does Jacksonville have an NFL franchise?

Jacksonville sports news: “JU falls to Ohio State... On a big-time stage in a big-time atmosphere, Jacksonville University’s men’s lacrosse team showed it’s capable of competing with a national power.” JU lost 9 to 6. Their coach explained, “We battled really hard and played our hearts out.”

The Boston Globe. You get a sports section with headlines and a couple sentences. More requires a subscription. Of note to San Diegans is Dan Shaughnessy’s column, “Why we love Larry Lucchino.” Lucchino is CEO of the Red Sox, was a despised Padres CEO. I run a search with the column title, click on the provided link, which brings up the entire column. Not much there. I did learn one new thing: Lucchino is “The only man in the world with a Final Four ring, Super Bowl ring, and World Series ring.”

The Washington Post. “NBA set to have fewest 20-point scorers in 47 years.” Turns out to be a fact-free article, “Defenses have adjusted... Coaches have changed offensive approaches...”

New York Daily News sports news: “Braun, A-Rod, Cervelli, Melky linked with dollar amounts...” blah, blah, blah. Miami and biochemist and steroids and I wonder if I should get new tires for the truck?

Houston Chronicle sports news: Roger Clemens turns up in Kissimmee, Florida. He has a “spring training instructional role” with the club. Says receiving only 37.6 percent of the votes for Hall of Fame entry is not a big deal.

Chicago Sun-Times sports news: White Sox not lacking for leaders with A.J. Pierzynski gone.” Sun-Times news news: “Woman bites off boyfriend’s tongue after Valentine’s spat...returned to her apartment and got in a fight. She asked him to leave, but he wanted to end the argument. So he leaned in for a kiss.”

Denver Post sports news: “Woody Paige: Nuggets don’t look good enough to wear NBA crown.” News news: Attendance at the annual National Storm Chaser Convention, held in Denver for the 15th year, fell to 300 after setting a record of 350 people last year.... What tornado researchers are learning as they track more hurricanes is that the vaunted storms are much weaker than advertised....”

Dallas Morning News sports news: “Unlike with its players, the NFL doesn’t have a salary cap for coaching hires. [Cowboys owner Jerry] Jones hasn’t held back in adding seven new coaches to the Cowboys’ staff.”

Detroit Free Press sports news: “TV ratings: More Detroit residents watched State of the Union than Michigan-MSU,” and, “Ticker: Urban Meyer tells a tale of Woody Hayes’ private parts and a turtle.” Detroit news news: “An emergency financial report to Gov. Rick Snyder makes it clear that a six-person team poring over Detroit’s financial records does not believe that Mayor Dave Bing and the City Council are capable of turning the city around on their own....”

Minneapolis’ StarTribune sports news: “Gophers blow 16-point lead, collapse against Hawkeyes.” News news: “There’s a movement to declare ‘Minnesota Blue’ the official state poem. It was written in 1985 by a guy in Hawaii, but it’s otherwise modern and local.”