“I play songs about things that should never be brought up at the dinner table.” 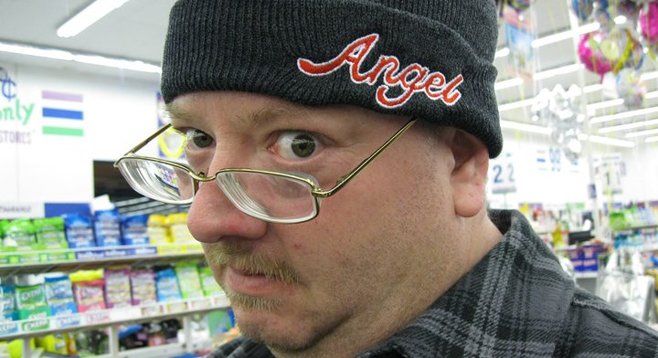 ‘The simplest way to describe my music is acoustic rock,” says A.K. Skurgis, who spent five years playing bass and singing for hard-rockers Acid Burn before staking out a career as an introspective solo performer in the vein of Tom Waits and the late Elliott Smith. “I play a mix of straight-up rock tunes, songs of emotional turmoil, and songs about things that should never be brought up at the dinner table. That’s my live show. My studio stuff is about the same; all originals but more fully instrumented.”

Based in the Rolando neighborhood near SDSU, Skurgis makes an important distinction between his debut full-length, Skurgisms, and his performances. “Live, I play acoustically, just me and my guitar. On my CD, out of 21 tracks, only a handful are acoustic. I’m playing acoustic and electric guitar, plus bass, drums, and keyboards...some of my songs exist in two very different versions — one-man acoustic and full-band electric.”

Aside from doing occasional spoken-word recitals in South Park at Rebecca’s (New Poetic Brew), Skurgis is gearing up for what he hopes to be his busiest year yet. “After playing 500 gigs, I quit counting. I really did keep track. I have OCD. I’m currently working on banging out new material, dusting off a few old tunes from way back, and retooling some songs I was never quite happy with. I’m way overdue for another CD, or maybe a digital album, the way things are going now.

“So, I put new strings on my gee-tar the other night. Wish me luck.”

MOST YOU’VE SPENT ON A DATE?

“The world is never going to be exactly the way that you want it to be.”

“Something by Beverly Cleary [Ramona the Pest, The Mouse and the Motorcycle, etc.]. As an adult, I’ve been a huge fan of Ed McBain, including the books he did as Evan Hunter.”

“Religion and politics. They’re one and the same to me.”

“I had a conversation about music with [occasional San Diegan] Rob Halford at La Salsa in Hillcrest. We talked about the Judas Priest album Sad Wings of Destiny while he waited for his order to come up. Very nice guy and my best celebrity encounter ever. Although I did once get wasted with Slash and Duff from Guns N’ Roses at an afterparty in Hollywood, shortly before the band went big time.”

WORST MOVIE THAT YOU LOVE?

“Circle of Iron, with David Carradine. The premise was cool, some of the scenarios were stupid, the production was horrible, but David Carradine played multiple roles. I’ve always been a big Carradine fan and, awful or not, I really enjoy this movie.”

SOMETHING YOU NEVER RUN OUT OF?

“To learn how to make myself small enough to fit into a bucket.”

WHAT WOULD YOU TELL THE YOUNGER YOU?

“Do not smoke cigarettes and stay away from the hard drugs. Take better care of yourself. You just might end up with some health troubles and addiction issues as you get older.”

BIGGEST LIE YOU EVER TOLD?

“Of course I’m wearing a condom.”

THREE THINGS WE DON’T KNOW ABOUT YOU?

Outtake: TOP WEBSITE BOOKMARKS? 1. Facebook. “This seems that is the only way to communicate with some of your friends anymore. We have all these different devices with phones on them, but who makes phone calls nowadays? So Facebook is a great way to be in touch your friends that are no longer local.” 2. Craigslist. “I’ve been selling all kinds of shit on there for years now.” 3. Yelp. “Yelping is a hobby of mine. If you read in between the reviews, you can find a good place to get a bite to eat. It’s also quicker and easier to browse and locate businesses than the online Yellow Pages.”

Artists Note: I started out playing solo back in 1989. I've been in many bands since then, but the majority of my music life has been as a solo artist. Wayyyy before Acid Burn! Just wanted to mention that! A.K.

First met A.K. in Normal Heights...we worked at the same establishment together for a year. He's a great guy and a talented musician.

Check out my page at the "new and improved" Myspace:

The "new and improved" Myspace...still sucks. Check out my modest Bandcamp page instead!