SDG&E “committed to customer privacy” or disrespectful of it? 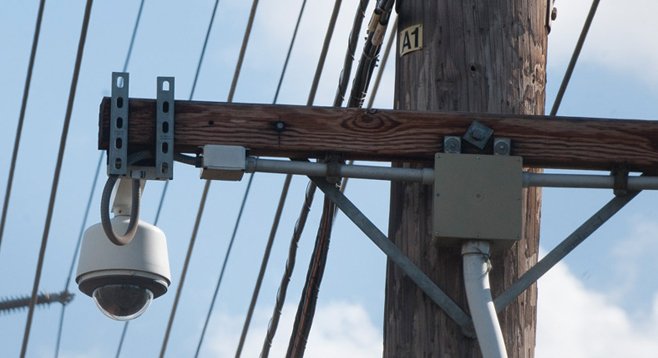 “I expressed my concern about the new tilt and pan cameras because they have the ability to not only observe my backyard, but they can see directly into the sliding glass doors at the rear of my house,” says Garner in a June 2010 letter to Sempra, SDG&E’s parent company, following up on phone calls inquiring about the camera installation.

Having prior experience working with similar cameras — Garner says prior to retirement he worked on the design and installation of a battery of high-resolution cameras for the Port of San Diego — he initially asked for a meeting with the utility to visit the control area of the camera operator and determine to what extent his property was visible. The request was promptly denied. 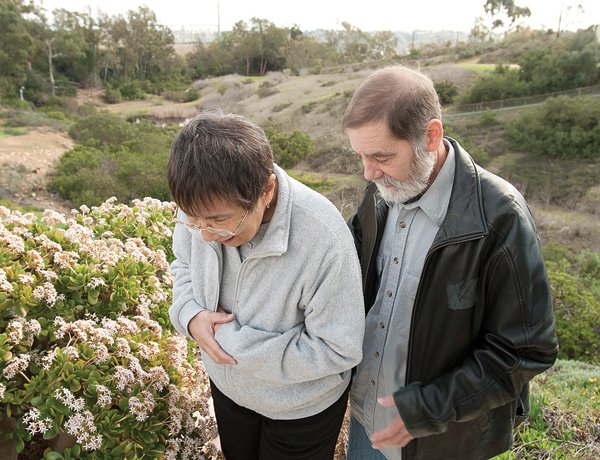 Robert Garner, with his wife Mary Ann, worries that SDG&E cameras installed nearby allow strangers to peer into his backyard and house.

“Tilt, pan, and zoom cameras as used at the Friars Road Substation that I am familiar with...have a zoom and resolution capability that would permit the reading of a vehicle license plate or recognizing a subject’s face at a distance of 300 feet,” Garner says. “[These] cameras could probably see the zits on my daughter’s face as she watches the television [in Garner’s living room]. She wouldn’t like that.

“Per our telephone conversations...I appreciate your assurances that you will respect my privacy rights. However, I insist on [adhering to a theory of] ‘Trust, but verify.’ Is that unreasonable?”

Next, Garner went on a letter-writing spree, firing off five more letters within the span of a few weeks in June 2010. These included a sketch of his home as well as photos of his backyard and of the offending camera. Garner also proposed a handful of solutions that he believed would be reasonable for SDG&E to undertake while still satisfying his request for privacy.

The suggestions range from the mundane to the amusingly bizarre. Garner admitted in a later interview that once it became clear he wasn’t going to get a response from SDG&E, he began having some fun with his correspondence.

The first suggestions were relatively simple. On June 15, 2010, Garner requested what he called a “defensive shield solution,” whereby a sheet of metal would be affixed to the camera mounting to limit its range to cover only property owned by the utility. “As long as the shield blocks my view of the lower lens when viewed from my house, my privacy is verified,” Garner said in endorsement of the relatively simple fix.

Although SDG&E would ultimately ignore this suggestion as well, Garner wasted no time, suggesting the very next day a solution he called STARTc ­— “Strategic Talks About Relocating The Camera.” The plan suggested moving the camera to a spot where it didn’t interfere with his privacy. Garner pointed out that, in his educated opinion, the initial installation was subpar in that the large wooden pole it was mounted to made it effectively useless in monitoring a portion of the utility’s property, anyway.

Garner then developed his most ambitious plan of all — the “Star Wars Solution,” whereby he proposed to mount a laser in his house aimed at the camera. “Remember, if you can see me, I can see you. As long as your camera is never focused on my house, your security is secured,” he wrote in a June 17 letter to Sempra. “However, panning and tilting the camera to observe my house will inhibit the operation of your equipment.”

In a follow-up e-mail, he tells the Reader that modern cameras “can withstand the beam from ‘legal’ lasers such as those used for pointers (unless SDG&E went with really cheap cameras). You can buy higher powered and probably illegal lasers from China.”

Though he says he elected not to go the laser route, Garner provided an advertisement for a “military-grade” device from a company called Wicked Lasers, which claims its most powerful handheld units can project an uninterrupted beam for over 80 miles and can be seen from space.

Garner also contacted San Diego police, inquiring about the cameras and asking if they had any access to or knowledge of their capabilities. In July of 2010, SDPD Community Relations officer Edward Zwibel responded, stating that the police had no access to the cameras but that “[n]othing related to those cameras is confidential as far as the neighborhood police department is concerned.”

The Reader contacted SDG&E in January and requested further insight as to what the facility was used for, why and when the cameras were installed, and whether Garner’s concerns about their capabilities might be warranted. Copies of Garner’s past unanswered correspondence were provided to the utility to facilitate their research into the issue. Their response: “SDG&E is committed to customer privacy and our security cameras are used only for the purpose of keeping our facilities safe and secure,” reads the entirety of the response provided on January 18.

Garner wasn’t surprised, calling the response, “Exactly what I would expect.”

He adds, “My correspondence with SDG&E has been an amusement. I never expected anything would come of it,” and at this point he’s “just having fun poking the pig.”

SDG&E should mount the shield, it is a no brainer! + I'd like to be able to get security cameras mounted to SDG&E power poles and pay for them just like dawn to dusk lights... This would be a huge asset to neighborhood security!

Another solution is for SDG&E to give the Garner's the cameras IP address so they can ALSO MONITOR the cameras "feed"...