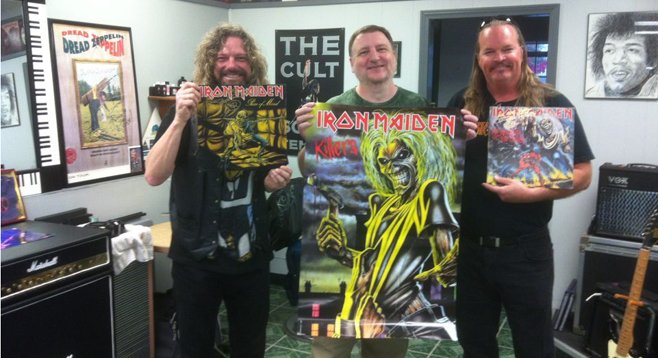 “With my ability to custom-build many of the items and memorabilia being loaned or donated for display, the total cost for construction has been around $2000, but it looks like a million dollars,” says Robert Munger of Oceanside’s Rock Your Loxx, a new music-themed hair salon. Describing himself as the operation’s “visionary, designer, and craftsman,” Munger is working with owner and stylist Stephen Jerome, who fronted local ’80s glam band X-Factor, to convert the salon (formerly known as Hair Quest) into a sort of hairy Hard Rock Cafe.

“The decor includes signed memorabilia, numerous album covers, posters, books, and rock magazines. The mirrors feature hand-painted piano-key frames, and the album covers that span the entire upper perimeter of the shop can be changed, allowing the look of the salon to constantly evolve. There’s a small stage with a set of Ludwig drums, amps, and guitars, and the cabinets at each stylist’s station are custom-built Marshall amplifier replicas with working drawers. Rock music is always playing.”

Munger met fellow Carlsbad High grad Stephen Jerome in 1991, when the rocker-turned-hair-farmer joined Munger’s metal band Menace, while attending a North County beauty college. After the band split, Jerome cut hair for Supercuts before purchasing the existing Hair Quest salon in south Oceanside, where Munger went to see him for a trim in late 2011. “At this point, the place didn’t have much appeal as far as the look of the interior or exterior. No music playing and very little in the way of decor... He was contemplating closing his shop because of the bad economy. He was struggling to make a living.”

This gave Munger an idea. “Steve looks like a rock star with long, curly hair...he loves and plays rock music. Why not convert [the shop] into a rock-themed salon? I’m passionate about music, and I hate going to the salons in the area for a haircut. This would be a place where I’d love to go.”

Services priced from $23 to $100 range from “General Admission” up through “Loge,” “Front Row,” and “Backstage Pass,” which includes a two-song performance by stylist-singer Jerome. “We’ll also have open-mic karaoke nights and after-hours listening parties for new releases and historical rock anniversaries,” says Munger.