A coastline ride after “being blown up” 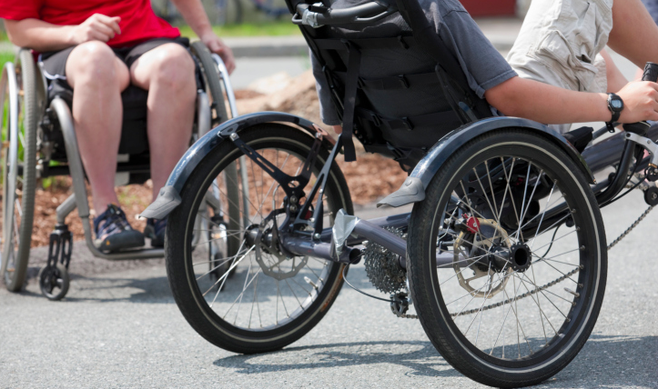 Local representatives of the Wounded Warrior Project sponsored a group of 45 veterans in a 30-mile bike ride along Coast Highway 101 on February 9.

Starting off at Buccaneer Beach in Oceanside, the riders were taking a much-needed rest by noon, at the halfway point — Seaside Beach in Cardiff — before turning around and heading back up north.

Most of the riders had battle injuries to their arms and legs and were pedaling specially equipped recumbent bikes. An international manufacturer, Trek Cycles, donated all the special bikes.

Known as the Soldier Ride, the Wounded Warrior Project organizes around 20 bike rides a year for disabled vets in various parts of the country. While it gets the vets outside for fresh air and camaraderie, the event is not a fundraiser, like when folks pledge a certain dollar amount per mile ridden.

“We offer a four-day rehabilitative program,” explained Pete Calaldo, the ride’s coordinator from the group’s New York headquarters. “The riders also have classes on yoga, health, nutrition, and wellness issues.”

Former Marine Sgt. Eric Delion, from San Diego, was one of the participants. He suffers from a brain injury and post traumatic stress disorder, from “being blown up too many times,” he said. In Iraq, he was attacked several times by roadside bombs. Delion said the ride was helping him to “build moral and release energy.”

About twice as many volunteers rode along with the vets or drove support vehicles. About half of the volunteers were former military. The slow-moving contingent was escorted the entire trip along Coast Hwy. by three California Highway Patrol units.

The City of Oceanside welcomed the group by blocking traffic on both southbound lanes of Coast Highway, to allow the riders to proceed at their own pace.