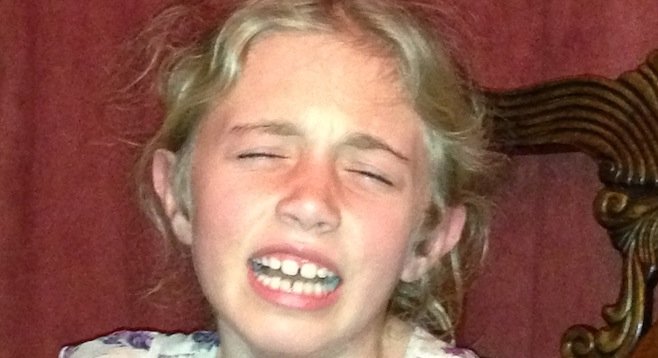 Jane came rushing in like a gust of wind, disrupting the air in the room with her abrupt appearance. As usual, she managed to not miss any surface as she unloaded her many things — a purse on this sofa, an even bigger purse on that chair, a huge binder on the dining table, Starbucks cup on the coffee table...I’m always amazed by the amount of baggage she can load into those tiny arms of hers.

“You will not believe what just happened to me,” Jane said, still huffing from lugging all her stuff up the steep street and then two flights of stairs. She took a draw from her inhaler. “I almost got a ticket this morning.”

“Almost?” I raised a brow. “So, you talked yourself out of it?” I collected her things and consolidated them on the couch.

Jane plopped down next to the pile I’d created and let out a long sigh. She took a sip of her coffee and settled back into the cushions. “So, I was dropping the girls off at school this morning,” she began.

“Don’t tell me you were speeding around kids,” I said.

“Which you almost got, but didn’t.”

“Right,” Jane said. “I had just walked them to their classes and was on my way back to the car. The light was red, but I started walking across the street. I was almost to the median when I noticed the cop and realized that what I was doing was wrong — but then I got stuck on the median, so I just stood there. As soon as the light changed, he beelined over to me.”

“So, you jaywalked? Is that a big deal?”

“I jaywalked in a school zone,” Jane said with gravity. “So, anyway, he gets over to me, and I just started apologizing and saying I would never do it again. He said he was going to let me off with a warning.”

Just as I reached for my phone to check my Twitter feed during what was turning out to be an anticlimactic story, Jane added, “So I told him, ‘If you want to make an example of me in front of all the other parents, you can pretend to give me a ticket and I’ll pretend to be really upset — I can cry on demand.’ But he was, like, ‘No, thanks. That’s okay.’ And I said, ‘No, really, I can cry on demand. Let me help you — pretend to give me a ticket and I’ll cry.’ But he insisted that it was okay, that he didn’t need me to cry, so I thanked him again and went back to my car.”

“You’re insane,” I said. “He must have been, like, What is wrong with this chick? But you know what? I can cry on demand, too.”

David had apparently been listening to us from downstairs because he bounded up the steps to give both Jane and me his Are you guys for real? face right before asking, “What do you mean you can both cry on demand?” He sounded the same way he does when he impersonates Vizzini from The Princess Bride.

“So can Bella,” Jane said with pride in her daughter’s abilities. Jane described how happy she was when, after a rehearsal for a show in which her eight-year-old played a milkmaid who spills her milk, Bella’s teacher asked Jane if she knew her daughter could cry on demand. The teacher explained — to my delighted sister — that after Bella’s convincing cry, the child’s face immediately brightened to a smile as she announced, “End scene!”

“You’re a family of sociopaths,” David said only half-jokingly.

“It’s not because we’re sociopaths; it’s because we’re extremely empathetic,” Jane argued. “We’re already emotional and able to take on the role of being emotional and feeling what other people feel. I could cry right now if you showed me a cotton commercial.”

“What in the...huh?” David’s face was scrunching further into folds of perplexity.

“You know,” Jane sang the jingle, “The fabric of our lives,” choking up on the last word. “It’s sad.”

“Not sad,” I said. “You mean it’s touching.” Jane nodded in agreement. Then, to David, I said, “What? You can’t make yourself cry?”

David shook his head in bewilderment. “It’s not some genetically inherited talent,” he said. “That’s a purely emotional learned and practiced behavior. How do you even make yourself cry? Do you think of something sad, or do you just...” David trailed off.

“I used to imagine what it would be like if each of my family members died,” I said. “You know, I’d gauge how much I loved them by how hard I felt like crying when I imagined being at their funeral.”

This time, David’s face went through so many twitches and adjustments I couldn’t begin to describe his expression. “That’s a whole different kind of weird,” he said. “Do you imagine you’re all in a lifeboat and if you have to throw one of them out to save all of the others, who it would be?”

“No, that’s terrible,” I said. “That would be murder. I can’t even believe you went there.”

David laughed — it was a half guffaw, half choking sound.

“Oh, I forgot,” Jane said, cutting through the glare David and I were sharing with each other. “Bella also faked a seizure.” David threw up his hands. “She was at cheer practice, which had been going for, like, two hours already, so she faked a seizure. When the coach came to find me and I got over there, Bella admitted that she had faked it because she was tired and wanted to stop.” Again, that look of pride washed over my sister’s face. “She really is a good actor,” she said. “But she can’t fool me. It was the same with Mom...remember?” I nodded, and Jane explained for David, “Our mother was the master — you couldn’t get anything past her. Maybe that’s why we’ve gotten so good. All those failed attempts to try to get away with stuff at home.”

“It worked for you once,” I said. Jane knew what I was talking about. As a young girl, she’d smacked our sister Heather in the face, and when Heather began to bleed, Jane started bawling. By the time Mom found them both, she went to console Jane, who was the more hysterical child.

David rolled his eyes and slowly backed away.