Park and Rec Department is not keen on cleats 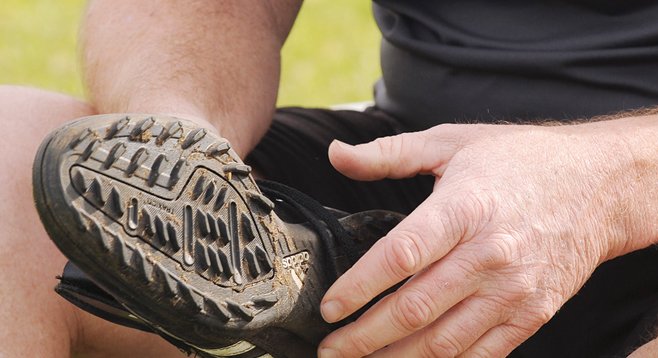 The crackdown on cleats is not some power trip from a policy-rabid ranger. The new directive comes straight from the city’s Park and Recreation Department, prompted by complaints from a few individuals, referred to as control line fliers, who fly model airplanes. They say that the athletes’ cleats tear up the turf.

On a sunny Saturday morning at 10:15 a.m., two dozen players of “Goaltimate Frisbee” — a game best described as hockey with a frisbee — gather at ski beach. They range from lawyers in their early 30s to Goaltimate veterans in their mid-50s. They slide supports onto their ankles and buckle braces onto their legs as they wait for a group of soccer players to finish playing their weekly pick-up game at the park.

The two groups have met at Ski Beach, a 50-yard square of grass located near the boat ramp off of Ingraham Street, for over 20 years. The patch of Bermuda grass is convenient, never crowded, and offers a fairly decent view of the bay and Fiesta Island. 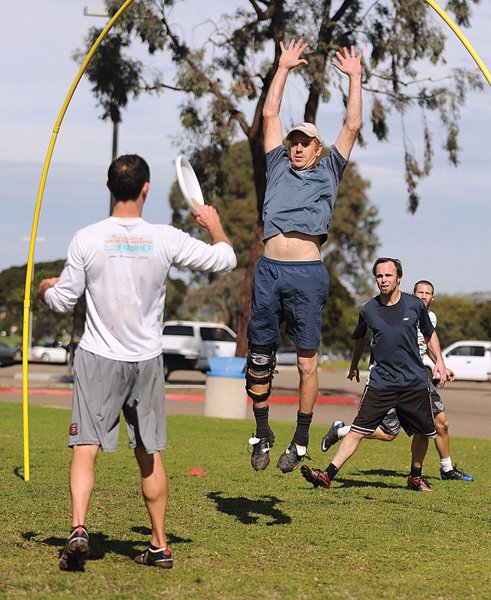 A few citizens have complained that the cleats worn by these “Goaltimate” players, as well as soccer players, are chewing up the turf at Ski Beach.

“This is one of the reasons we live in San Diego,” says Don Pugh, who has been playing soccer at Ski Beach for more than 20 years. Pugh, a tall, sturdy 51-year-old native of New Zealand, continues to talk as he removes his shoes and knee brace. “We live here, in San Diego, so that we can play sports in the middle of January in shorts and a tee. We respect the rangers and this field. We’ve planted seed, removed rubbish after a holiday. We take care of this area for our own benefit and for the benefit of others. And we wear cleats for safety. All we ask is to continue doing as we’ve done for over 20 years.”

On this Saturday in January, less than a week after hard rains pelted the area, the Bermuda grass is green and plentiful. There is no evidence of any wear-and-tear. There are no signs posted stating that cleats are prohibited at city parks. In fact, there is no law that outlaws cleats.

“I’ve searched city code for laws about cleats at city parks and couldn’t find anything,” says attorney and regular Goaltimate player Chris Vaughan before lining up for the game. “It’s funny, you visit the city’s Park and Recreation website and you see these 19 tenets the city posted about the virtue of parks. They include things like ‘be happier, feel great, lose weight, reduce stress, create memories, build family unity, build self esteem.’ These are all the things that we do here.”

Despite the players’ good intentions, city rangers have been ordered to clear the field of cleats. Fueling these orders are the complaints trickling in from one or two people.

“Once again, [a control line flier] called me on my cell phone about soccer players wearing cleats at Ski Beach,” wrote ranger Steve Waldman to senior park ranger Lori Charett-Gerbac in a November 3 email obtained through a public records request. “He asked if the Mission Bay park rangers ever enforce the rules.”

Those rules, however, are not so clear-cut.

On November 19, Charett-Gerbac sent an email to park rangers. “We received a complaint via [San Diego Police Department] regarding soccer players wearing cleats and uniforms. Please contact the groups, ensure they are not wearing cleats, only turf shoes, bibs/aprons if they must and have small goals, not the huge ones and are respecting others space, etc., and adhering to park [regulations].”

Charett-Gerbac asked the rangers to distribute a city flyer that reads: “Per the San Diego Municipal Code it is illegal to: delineate playing fields, wear cleated footwear, set up goals or nets, compete on established teams wearing a team uniform, employ a referee, schedule to play with an organized league.”

Without a specific law that prohibits cleats, the city’s Park and Recreation Department has turned to the vaguer notion of “department standard” to condemn cleats. On December 5, Charett-Gerbac responded to pleas from Pugh and other soccer players. “While we understand your desire to wear cleats to avoid injury, they are not allowed in the park. Mission Bay Park is considered a passive recreation park area. It is a Park and Recreation Department standard to regulate traditional cleated footwear in Mission Bay Park and other passive recreation areas due to grass damage, wear and tear and effects on park users.”

Then Charett-Gerbac sent another email to rangers. “Please continue to enforce the no-cleats policy, we got another complaint that the turf is torn up and the Frisbee football guys are apparently the culprits at Ski Beach where the control line fliers fly.”

The soccer and frisbee players don’t feel that one or two people’s complaints should result in a more strict interpretation of city law. They resent the accusations that they are destroying Ski Beach. “Look,” says Goaltimate player Vaughan, “We are all about stewardship. We are not going to abuse this field. We appreciate access to this park and we want to improve it for everyone. If anything, this whole ordeal has only made us more mindful of the field and what we can do to make it better. I just hope the city feels the same.” ■

Isn't it interesting how arrogant city bureaucrats make up rules, or cite laws that don't exist. All in an attempt to intimidate taxpaying citizens or extract fees for permits. There are other solutions for example; Some city park and rec facilities have artificial turf installed ...maybe an area like this could be setup for team oriented activities in Mission Bay Park area.

There is no such city code that prohibits citizens from wearing cleats (for safety) while playing soccer, football, or freebee football, with a few friends. If the reason for such drastic actions on the ranger's part is the potential damage to the turf then there are some inconsistencies with this. In the 23 years that I have been playing soccer at Ski Beach Saturday mornings thee has not been any issues with the turf. San Diego citizens show up and play a few pickup games, socialize, exercise, enjoy their park, and for the most part have gone home by noon. If you visit the area you will not find damaged turf because it is not the case and there is no past occurrences where there has been an issue... in 20 + years. If the turf area of Ski Beach is so sensitive as to persecute those wearing cleats, why allow 4 days of RV vehicle parking on that very grass for events such as San Diego Bay Fair, which allows the whole turf area to become an RV parking lot for 4 days. (see this site) http://www.sandiegobayfair.org/rv-info.html. That seems very inconsistent with the enforcement of a vague standard against cleats and seems arbitrary. This seems like one ranger's over reaction at least and at most some sort of bias against the persons who play soccer and other sports there. We are also tax paying citizens and should be able to participate in healthy activities without harassment. Also, is Park and Rec going to enforce this throughout the city? Will parents have to purchase turf shoes for their 5 year old daughter who practices at the local park or risk a citation?

It"s not about use of the space, it IS about finding ways to generate revenue from new fees on capricious rulings from those who believe they have power to do so. Watch the Park & Rec Dept come up,with a policy or user fee for use of cleats on grassy areas of public parks. We can only hope this is one of the many things that Mayor Filner could stop in its tracks before it gets any sort of foothold.