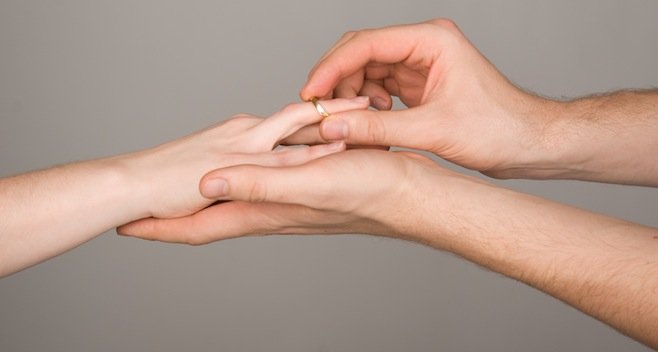 "Whoa, what is that on your finger?” Shawn reached out to grab Jordan’s hand. “Did you guys get married? What is that, titanium?”

Jordan smiled sheepishly and then removed his ring and handed it over so his friend could inspect it. “It’s actually tungsten carbide,” he said. “And we’re not actually married, we’re just fake-married.”

“I wasn’t going to say anything, but I noticed Katie’s ring earlier,” Kimberly said. “Girl, that is some ring,” she added as Katie held it up for inspection.

“It was Jordan’s grandmother’s,” Katie said. “It’s not an engagement ring; an engagement ring implies that a wedding is going to happen, and I don’t want to have a wedding. So instead of being engaged, we’re fake-married — that’s why I wanted him to wear a ring now, too. And when he’s out of school, we’ll be real-married.”

“So, you proposed?” I asked Jordan. “You can’t just leave us hanging. We need details.” Katie and Jordan both resisted, insisting that it was not a great proposal story. “Come on. It can’t be any less romantic than mine,” I said.

“We still don’t have a ring,” I countered. “Let’s hear the fake newlyweds’ story, then yours, and then mine, and we can decide whose proposal is the most pathetic.” Kimberly, the most enthusiastic among us, couldn’t lean in farther without climbing onto the dining table.

David made the rounds, refilling everyone’s glass with their preferred beverage (white wine for Kimberly, rosé champagne for me, scotch for Jordan, bourbon for Katie, beer for Shawn) as Jordan began. The couple, both in their mid-20s, had developed a routine in their eight and a half years together. Jordan always wakes up first and then returns to make sure Katie gets up.

“I got up and did my morning stuff and, 40 minutes later, Katie was still groggy and trying to wake up. I went back in the room and, while she was still lying there, I tried to ask her to marry me. But when I get nervous I get giggly and I stop breathing. I couldn’t say anything without stammering. So it took a good couple of minutes to come out with it, and Katie had to translate what I was saying.” Finally, Jordan explained that even when he got the “Will you marry me” part out, Katie said, “I thought we were waiting till you got out of school.” They’d discussed marriage before and had agreed to wait because Jordan’s financial aid relied on his status as a bachelor. After more stammering, he finally got it across that he wanted her to start wearing his grandmother’s ring.

“And she said, ‘If this is important to you, then of course I will,’” Jordan finished.

“Kimberly was half asleep when I asked her to marry me, too,” Shawn said. Now it was the rest of us who leaned in. “Her absolute favorite holiday is Valentine’s Day, and I wanted my proposal to be the very last thing she heard on her favorite day.” Shawn went on to explain that after a nice dinner and a few drinks, both he and his lady love began to fall asleep earlier than expected. “I set my alarm for just before midnight. I knew she’d want to have a say in picking out her own ring, so I got this plastic duck ring from a gumball machine.”

“We friggin’ love gumball machines, those things are so much fun,” Kimberly interjected. “I love that duck,” she added under her breath.

Shawn smiled at her and continued. “I set the alarm so that I would wake up just before midnight, because I knew I was going to fall asleep. When the alarm went off, I got up and got the duck ring and then woke Kimberly up and said, ‘I love you deeply and want to share the rest of my life with you. Will you marry me?’”

Kimberly cut in: “I had been totally out of it, so it took me about 15 seconds to respond, but when I realized what he was saying, I woke up, looked at him, and said, ‘Of course I will.’ And then I fell back to sleep.”

“You know what’s weird? We were all in bed when we got engaged,” I said.

Jordan smiled at this. “I felt like I did such a terrible job, by proposing while Katie was all groggy and in bed, but knowing that you guys all did it that way makes me feel like, Okay, it wasn’t so bad.”

“You want to feel a lot better?” I asked. David gave me an encouraging smile. “Well, we had just gotten into bed one night after a month of meeting with lawyers to find out how much it would cost to draw up legal documents that would give us ‘pull the plug’ rights. We discovered it would take months and cost thousands of dollars.” I sipped from the cocktail David had supplied me with after I’d finished my glass of champagne. “So, we’re laying there, adjusting our pillows in the sleep position, and David asks, ‘How much does it cost to get married?’ And I was, like, ‘I think it’s 100 bucks; 50 for the certificate, 50 for the license.’”

“So, I said, ‘Why cut off our nose to spite our face?’” David explained. “Maybe we should just get married.”

“Oh, and in terms of not having a wedding,” I said to Katie, “We went to the county offices on Wednesday, between errands. In jeans. We didn’t tell anyone. They had to pull a file clerk from the office to be our witness.”

Kimberly held up her glass. “Here’s to you guys getting fake-married,” she said.

“And here’s to all of us getting engaged while in bed,” I added, raising mine. “Also, David, we seriously need to look into getting rings.” David smiled his Sure, but probably not look and raised his glass to clink with all of the others.

On my wedding day I came to the rescue of a woman who'd gotten hit by a car. It was in the parking lot of the grocery store. My sister and I were running in to buy oodles of wine for the "big event". By the time we heard the sirens knowing the ambulance was on its way, holding the woman in my arms to keep her warm I told her she was now in good hands and I had to run if I didn't want to be late to my wedding! My sister was peeved, she was just standing there shivering and c-c-c-c-cold! It was an awesome day and an awesome night. My wedding ring got crushed and destroyed because I played war with all my friends kids!

Such fond memories... you really do need a ring though. I have a lot of them since I needed to replace the wave ring we'd bought during our honeymoon prior to getting married. Ain't life grand?