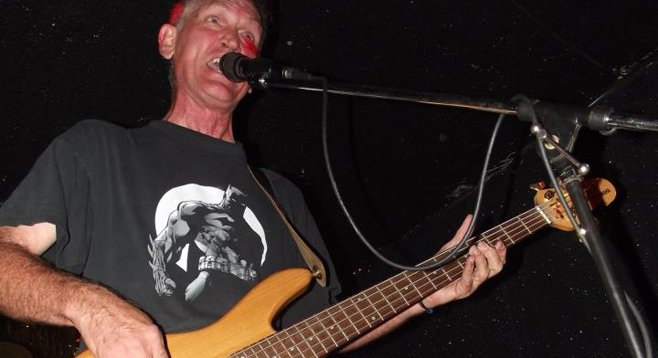 “With our original guitarist Jerry Flack out of commission last year due to back surgery, and too many family obligations to ignore, I found myself with a new decision crossroad,” says Jim Ryan of the oft-reunited punk band Cardiac Kidz. “Do I sit on the shelf and continue on with my life minus the music performance, recording, and creations that came from the resurrection of the Cardiac Kidz? Or do I get off my ass and go forward with my music and creative flow of things to say and stuff to play?”

Choosing the latter resulted in the Jim Ryan Project, which so far has included Billy Rath (Johnny Thunders and the Heartbreakers, the Street Pirates) and Joey Pitner (the Waldos), though the lineup remains fluid, pending schedules, locales, and requirements. “This is a project full of projects. I have to adapt songs from the Cardiac Kidz catalog to allow different genre musicians to play comfortably onstage with me — an exciting challenge — and it ensures that I get the right mix of growth and experience to push me off the comfy couch of life and expand as an artist.”

With only a handful of performances so far, Ryan is hard pressed to describe the new band’s sound. “As an artist, you don’t want to limit descriptions to a parameter of measurement, but I can report how my fans have described it. It’s a cross between the Ramones and the Monkees, with a twist of power pop, a thrust of Black Flag, and a hint of Bowie.”

Ryan also works as a graphic designer specializing in marketing and display art, as well as occasionally authoring books such as The Revelation Handbook: Surviving the Great Tribulation, published in 2005. However, “All roads seem to lead to punk,” he says, tracing his muse all the way back to when he caught the Clash at downtown’s Golden Hall in the early 1980s.

“This was a great show, I jumped out of the mosh pit and climbed up onto the stage and sang ‘I Fought the Law’ with Joe Strummer! I only got to the second line when I had to jump back into the pit because the bouncers were on their way across the stage. By the time I reached outside the mosh circle, I found that my jacket was literally ripped to shreds. Pure punk rock.”