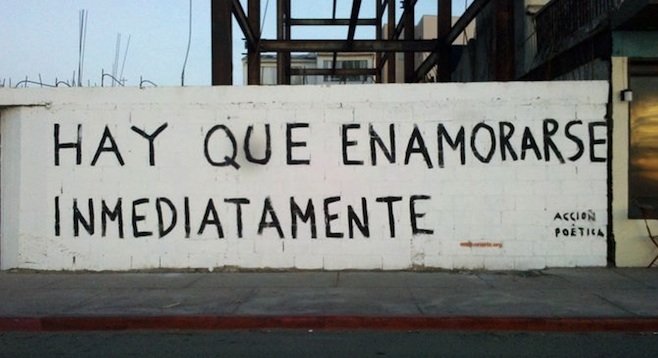 In Tijuana over the summer, many walls were painted white and then short verses were painted on them. The lines that seemingly were intended to promote art, culture, and poetry are now filled with tags, and imitators have popped up to make fun of the poems.

The plain, coherent grafitti is said to have been started in 1996 by Armando Alanís Pulido in Monterrey, Mexico. Reportedly, there are now white walls with short verses signed “Acción Poética” in more than 70 cities in Mexico, 23 countries in Latin America as well as in Spain, Angola, and Italy.

In Tijuan, one can find verses everywhere from downtown, to Otay, to Playas, and beyond. But other taggers have decided to express themselves next to the poems.

An anonymous tag that reads, “I get high so I stop thinking about you,” appeared next to one that reads, “I exist when I think of you,” signed by Acción Poética. The movement that calls itself poetic is an inspiration to many, a hardship on the eyes for some, and comedy gold for others. 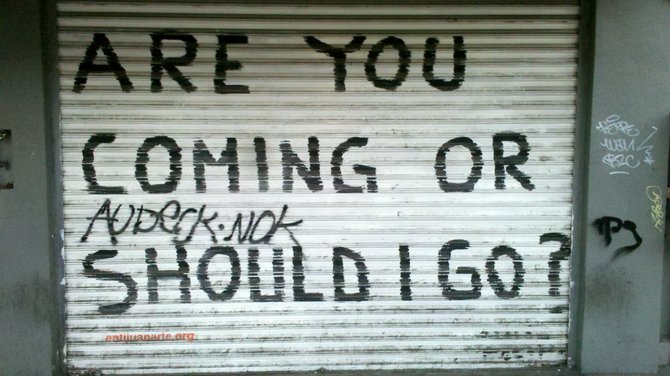 The poems mostly resemble what a teenage boy would write for a girl he has a crush on; there's one in downtown Tijuana written in English, similar to song lyrics by the Clash. It reads, “Are you coming or should I go?” A couple steps from that one there's another wall that reads the same thing in Spanish: “Vienes o voy?” Most of the walls have one-liners that are either a song title — like, “Besame Mucho,” for example — or a translated line from a popular song. 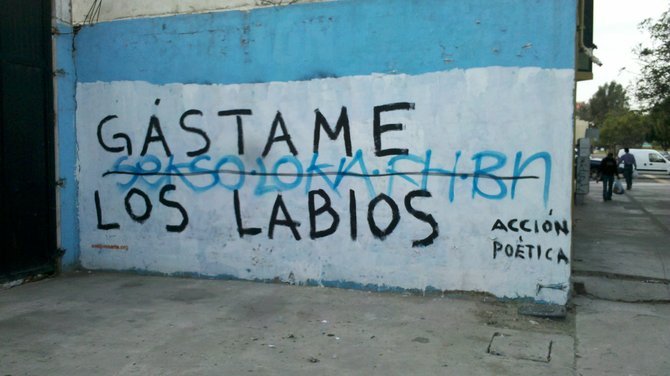 "Use my lips," on a wall near the border

“Sus frases son estupidas y de secundaria; de poetico no tienen nada” (The phrases are stupid and from middle school and have nothing poetic about them), comments Alexis Martínez, bartender of El Tigre and founder of Acción Poética Tijuaneada, a parody of the movement.

“Painting walls white and writing something pretty is not poetry or a movement, it’s visual trash,” says Martínez. “There's a few that are acceptable but do not come close to real poetry. That's why Mexico's literacy rate is so low — the people are satisfied with easily digestible garbage.”