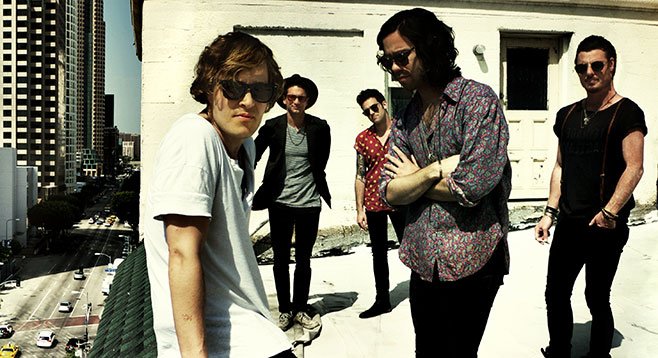 If the ’60s taught us anything, it is this: exactly how a rock and roll band should look. As a quintet, Terraplane Sun, which lists Venice Beach as their hometown, surely agree. Pick any British Invasion band from back then, study their stage layout, and Terraplane Sun could fit right onto any of them. Almost no band has escaped the heavy social gravity of the sound and the fury of your basic rhythm section fronted by a singer. And not just any singer, mind you. It has to be a rock-star singer. In this case, the rock-star slot is filled by Ben Rothbard, a rangy throwback who looks to have been genetically engineered for this job. Imagine Rolling Stones founder Brian Jones, only with Tom Petty for a father and Fleetwood Mac’s Christine McVie for a mother.

The rest of the band is lead guitarist Johnny Zambetti, Lyle Riddle on drums, a bassist who goes by the single name Cecil, and Gabe Feenberg on keys. Feenberg also plays trombone, accordion, and lap-steel guitar, each of which can take Terraplane Sun to a weird place. And what’s not to like? Today’s garage bands aren’t limited, as were the original garage bands, by what they don’t know. Therefore, there is no need to show off as an overcompensation for understanding only a handful of dominant chords and trying like hell to make the best of six strings. Bands like Terraplane Sun have all that history to fall back on, and they play better and they sound better and they have more choices at their disposal to choose from. Sometimes they sound reggae, other times surf-rock Ventures-ish, even though they call themselves a blues-indie-rock-folk-dance-soul band. They could go big at any minute, but for now it’s the fun and inventive bands like this one that restores my faith in the business of making music.

Jackson Price, the Paragraphs, and the Yes Team also perform.