Did new brewery venues live up to the hype? 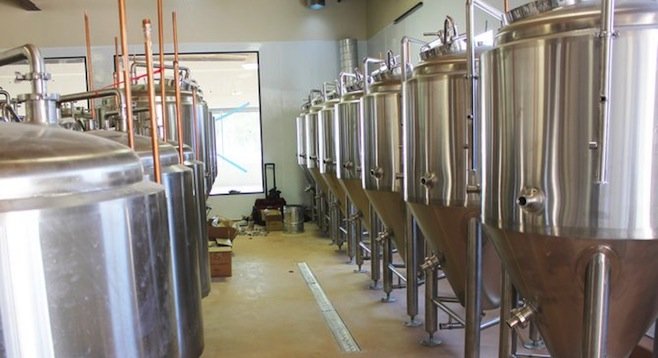 One of the biggest parts of my job as a beer journalist is keeping up on work-in-progress brewing companies looking to come online throughout the county. The current number of upcoming breweries I’m monitoring is at 40. They range from little guys to big aspirers, veteran operations to untested novices, IPA fanatics to Belgian beer enthusiasts, and nearly everything in-between. Twice a year, I share the future projects I’m most excited for. As 2013 comes to a close, I’m looking back on how well the businesses I had the highest hopes for fared once they opened.

Ballast Point Tasting Room & Kitchen: Though it’s not yet complete — an outdoor beer garden has yet to be constructed — this combo eatery, tasting space, and brewery is already taking off, luring beer aficionados to Little Italy with 50 taps, many of which dispense new and experimental beers brewed on-site. It exceeded even my lofty expectations and is a cozy place to congregate.

Pizza Port – Bressi Ranch: Most of the bells and whistles at Pizza Port’s largest brewpub are in the production facility that takes up more than half of the building, but the two-story restaurant is nice to look at, well laid out, and right on par with previous pubs. The fact it’s quieter and less jammed than other links in the chain is a positive or negative based on personal preference.

Stone Brewing World Bistro & Gardens – Liberty Station: I work for Stone, and employees had high hopes for this massive farm-to-table restaurant. Most of us have been blown away with how the place turned out. The design is different but just as thoughtful as its Escondido predecessor — US Navy heritage shows through, and there are bocce ball courts and a brewery pumping out unique new beers.

Nickel Beer Company: Owner Tom Nickel knocked nearly a decade’s worth of dust off his mash paddle brewing at Julian Brewing Company before opening his new solo venture in his part-time hometown, and the early beers are all the better for it. Sequestered in the mountain town’s former jailhouse, it delivers plenty of apple-ville charm — and there’s darts and foosball!

Benchmark Brewing Company: Could Matt Akin attain the same brewing success at his Grantville company as he did in his previous role at AleSmith? We all wondered, and the answer is yes. His mostly sessionable West Coast and English-style beers are tight, well balanced, and amazingly to-style. This is another business that blew past even this sometime-cynic’s expectations.

Mike Hess Brewing – North Park: Success in a small business park allowed owner Mike Hess to rally investors to take over a big bookstore in one of San Diego’s hottest neighborhoods and bring his beer to the people in a much more attractive tasting space. Catwalks and an efficient bar setup provide unique touches at this very well-received second coming of one of San Diego’s more popular operations.

Saint Archer Brewery: This Miramar company’s mission was to use the big personalities and platforms of its action sports investors to introduce skate, surf, and snowboard fans to craft beer. Some progress has been made in that area, but an only OK line of core beers failed to grasp the attention of beer enthusiasts early on. But improvements have been swift and many of late.

Modern Times Beer: Before there was beer, there was tons of Internet-generated hype over this business. I saved my enthusiasm for the debut of beers over blog posts. Varied and purposely style-bending, this Point Loma brewery’s liquid wares are pretty darn good, though I have yet to be impressed by their wild yeast-infused creations.

Plan 9 Alehouse: The beer at this nano-brewpub has been in short supply, but that’s OK. So far, this addition to the Escondido scene is best known as an energetic communal spot with a great assortment of beers from other craft operations. Hopefully, their homespun product will be just as noteworthy in time.