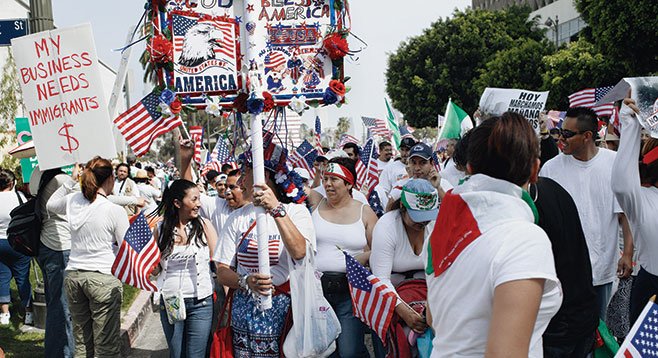 We’ve become so accustomed to our post-Vietnam, secularized, unsentimental styles of war endorsement (“Support Our Troops”) that the histrionic posters in the first room of the San Diego Museum of Art’s Women, War, and Industry are shocking in their plaintiveness. A 1918 appeal to buy liberty bonds shows a mother and baby cowering from a trollish German soldier under the caption “Hun or Home?” Another from the Great War depicts a sanctified-militarist version of the feminine: a glamorous, shapely armored Joan of Arc raises her broadsword to heaven, appealing to the women of America to buy war savings stamps. A World War II nurse recruitment image shows an officer conferring a nurse’s cap on a woman as if it were a wimple ordaining her for religious service. A very different tone, and one I’m partial to, is struck in Howard Chandler Christy’s naval recruitment poster of a sassy girl in a loose-fitting, off-the-shoulder sailor’s outfit. Who could resist?

This baggy, hit-and-miss exhibition of posters, paintings, photos, and installations, drawn mostly from the museum’s permanent collection, illustrates the connections, sometimes pretty loose, between women, wartime, and industrial civilization from the early 20th Century to last month. Some images are standard-issue heart-squeezers, like Alfred Eisenstadt’s 1940s photographs of farewells at Penn Station. Others are stark images of technical power. Esther Bubley, a photographer who should be better known and whose work has been heavily collected by the museum, in 1965 photographed mechanics servicing an engine-propeller assembly in Afghanistan: the engine guts are sharply defined; the fuzzy mountainous landscape in the distance hosts, I imagine, a tribal culture not much different from contemporary Afghani culture.

The exhibition might have been called Technologies. It covers everything from chemistry labs to rubber production to lobster fishing to silk manufacture. Bubley was especially gifted at portraying work-place attentiveness. Her photos of engineers and scientists, some of them leaning into the magical light of glass beakers radiant with fluids, are little essays on intellectual intensity. But she could also open wide and photograph a huge iron mine whose expansiveness illustrates how deeply set is industrial civilization’s assumption that natural resources are inexhaustible. Another great, well-represented woman photographer, Margaret Bourke-White, was one of the first archivists of modern aviation. Her 1951 airborne shot of a SAC B-29 tanker refueling in flight a B-50 bomber is a technological variation on the mother-child imagery of the World War I posters that open the exhibition.

The scope of Women, War, and Industry is broad enough to accommodate many topics. Catherine Opie, an L.A. photographer (born 1961), has made photo-essays on surfers, LGBT populations, and high school football players. Her 2006 photo of an immigration march in L.A. is a street jam of commerce, civic righteousness, religious enthusiasm, sexual flirtation, communal hilarity, and new-style carnival-esque patriotism. It has the crude, spilled-forth energy of a crowd in process of defining itself and its aspirations. Another kind of antic, comic-abrasive spirit seems to be examining us in two pictures by Frohawk Two Feathers (born Umar Rashid) from a pictorial narrative about a fictitious war between empires called Frengland and Fenoscandia. FTF’s work connects hip-hop and tattoos to classical myth and historical costuming. Each picture features two females set in a double-tombstone frame. The women in one picture are twin, deadpan-menacing assassins armed with a flintlock and sword; in another, they’re daughters of the Greek Titan Prometheus and speak Barallete, a now-defunct Galician dialect spoken by knife-sharpeners — appropriately, the Titan’s gals brandish a machete and hedge-clippers.

The Museum of Photographic Arts is hosting the second installment of their triennial invitational exhibition. From the dozens of artists whose work was submitted, the curators chose 16, all based in California and represented by work produced in the past five years. Staking Claim: A California Invitational is a compelling update on how image-makers keep banging away at the definitions of photographic practice — they’re making their own cameras (Susan Burnstine creates oneiric cityscapes with devices she makes from vintage camera parts, household items, and hobby plastic), or avoiding Photoshop but manipulating finished prints (Matthew Brandt dunks prints of lake views in the same lake water that’s the subject of the pictures), or borrowing pre-existent imagery (Paul Schiek turns 1950s mug shots from a Georgia prison into fresh, ambiguous life portraits). And they’re all chasing obsessions. I wrote recently about the camera obscura imagery of the Cuban-born American photographer Abelardo Morell, who photographs scenes projected into a room from outside. The four-color pictures by John Chiara in Staking Claim, created by huge cameras he himself builds, aren’t records of projections, they’re primary photographs: landscape imagery from outside the box enters through a lens and “burns” oversized, irregularly cut photographic paper. Chiara controls the burn by shuffling and positioning his hands to occlude and baffle the exposure. The pictures are like very specific yet still vague memory traces of forms and light, not landscapes as they exist out there but as they’re converted — or “conducted” — into incandescent, boreal emanations.

Photography is an art of the fugitive, the here-and-gone. Nearly every image-maker in this exhibition is making inquiries into evanescence. Klea McKenna’s installation, Paper Airplanes, is made up of 57 color photographs, folded into paper airplanes, of West Coast light over a period of 12 hours. They’re meant to remember the 12-hour shifts, dawn till sundown, of soldiers serving as anti-aircraft lookouts along the coast during World War II. The images are shockingly refractive and brilliant, and they memorialize not just those anonymous soldiers but the transient, infinitely toned atmospherics of the diurnal turn.

Photographers more than ever chase what’s fugitive by making “originals” of appropriated photographic imagery. This isn’t a new thing. Some of the weirdest vanitas imagery of photography’s early days was created by X-ray technology. In 1898 Czar Nicholas invited a radiologist to St. Petersburg to X-ray his and his wife’s hands. We see royal rings and bracelets wrapped around ghostly bones: they’re like images of posthumous selves. (And since the harmful effects of radiography weren’t known, the czar was already working on the posthumous part.) Another artist in MOPA’s exhibition, David Maisel, has been working on a project, History’s Shadow, which came out of a recent residency at the Getty Center. He photographs X-rays of art objects, usually from classical antiquity, to make a kind of eerie double-negative picture. His photos peer into the historical images we’ve made of ourselves and our world. One shows from behind two full-length human figures, as if strolling in a nebular vastness of some otherworld. His picture of a horse is all tremulous eddying vapors.

Google Street View is in its own way just as ghostly and elusive. Doug Rickard’s series A New American Picture has stirred a lot of critical conversation since he started it a few years ago. Rickard viewed an unconscionable number of Google images on his computer, narrowed them down to 10,000 possibles, then reduced those to 79. It’s the latest, counter-intuitive wrinkle in street photography: immediacy of event isn’t important, and the photographer’s intensely subjective point of view is beside the point. What immediacy Google View images possess isn’t intimate at all; it’s intrusive, indifferent, more scoping than peering. The locales in the MOPA selection are urban wastelands in the Bronx and Detroit. Teenage males amble aimlessly across streets lined with shuttered and graffiti-ed storefronts. Rickard’s project is to select, not create, the newest form of photographic impassivity and intrusiveness. It’s a fixed view, because of Google View’s eye-in-the-(low)-sky vantage. Most street photography reminds us that we never know when we’re being watched. Rickard’s series reminds us that we can always count on being watched by who knows who. There’s no privacy, but then who would pretend these street desolations are privacies?

Todd Hido is a more artful and disturbing intruder. He has made an unsettling art of photographic eavesdropping, and his cool subjectivity gives no release or escape. In the series Excerpts from Silver Meadows, Hido eavesdrops, with a drifty, intensely subjective intimacy, on places familiar from his childhood on the outskirts of Kent, Ohio, in the 1960s. Shots of a motel strung with oozy green and red lights, a farmhouse in the snow, and a creek, alternate with huggy close-ups of a torchy young woman in period cashmere and pearls, a telephone off its hook, and a street sign (“Shirley Rae”). We need the facile truism about certain art being unforgettable; it’s a way of saying something gets under our skin and never really works itself out. It dissolves into the bloodstream and in some indeterminable way readjusts how we look at the world. That’s what Hido’s work does to me. Staking Claim offers the smallest sampling of Hido’s insinuating vision, but you’ll get the idea.

Women, War, and Industry is on view at the San Diego Museum of Art until February 18, 2014.