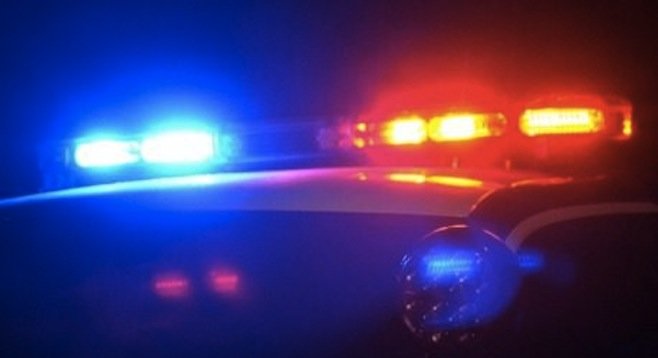 A police helicopter threw its spotlight on a slow-speed car chase through Ocean Beach Friday night, December 13. As many as nine patrol cars attempted to corral a stolen Honda Civic as it weaved on two flat tires through the same neighborhood streets that hosted the annual O.B. Christmas parade only a few evenings prior.

According to the police report, the 14-minute chase began around 7 p.m., when officers spotted a man "manipulating a handheld electronic device" while driving on West Point Loma Boulevard, near Sports Arena. A license-plate check revealed the car had been reported stolen, and officers signaled for the driver to pull over. He did not immediately comply, and more officers were summoned to assist.

Ignoring stop signs and traffic signals, the driver made his way from Point Loma into Ocean Beach, traveling in overlapping circles through and around Newport Avenue while a number of pedestrians and shop workers looked on.

Several eyewitnesses say they first noticed the helicopter flying overhead and began watching as its spotlight traced the chase around surrounding streets, eventually leading down Newport Avenue. The suspect rolled slowly past the bars and shops lining the street, speaking into a cell phone and repeatedly heading in the direction of the ocean. Staff members at a local body-piercing shop report one window of the car appeared to have come dislodged from its frame.

A bakery employee watched the Civic descend from the hillside to cross Sunset Cliffs Boulevard. He noted at least three patrol cars following immediately at the same pace and says he could hear sirens and the squealing of tires of others as they maneuvered around corners, likely attempting to head off the suspect. Multiple witnesses said at least five police cars were involved with the chase, with some claiming as many as nine.

O.B. resident Matthew Molarius watched the car swing southwest on Bacon without stopping, leading his pursuers on what he describes as a "goose chase." As the chase wore on, he says he noticed officers poised to throw spike strips in the suspect's path.

The Honda looped around, driving several blocks up and down parallel streets, before hitting a spike strip at the intersection of Abbott and Saratoga.

An SDPD representative describes the spikes as being hollow barbs, ejected like porcupine quills and remaining embedded within the tire as it rolls away, slowly leaking air out.

With both driver's side tires going flat, the suspect ultimately rolled to a stop at the dead end at the 5100 block of Narragansett Boulevard, where, after a quarter hour cruising O.B. on a Friday night, he let himself be arrested within view of the Ocean Beach Pier.

In addition to auto theft and evading police, the suspect was charged with parole violation and possession of methamphetamine.

What about the violation of the PD's Pursuit Policy. Where were the supervisors during thus pursuit?

Man at the speeds they were reportedly going, a snail could've avoided them! Sounds as though the Friday night revelers were treated to an evening's entertainment capped with an urban floor show! Lucky.